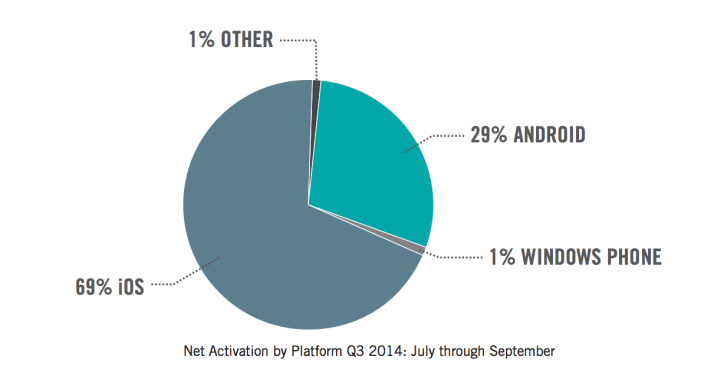 Good Technology is out with its latest report examining share of mobile platforms in the enterprise and in it noted that iOS was able to grow its market share following the introduction of the new iPhone 6 and 6 Plus. The increase from 67% last quarter to 69% during Q3 isn’t a huge one, but it’s notable given it comes at the expense of Android OS just over a month into sales of the new Apple devices.

The report, which tracks activations by platform from July to September, showed Android grabbed 29% during the quarter (down from 31% in Q2), while the rest of the market is split up between Windows and the “Other” category with 1% each.

Also noted in the numbers from Google Technology is a much higher percentage of iPhone 6 units activated compared to iPhone 6 Plus. This is a data point that lines up with previous reports tracking adoption outside the enterprise market. Specifically, Good Technology’s report says that the split among new activations for the two new iPhones is about 85% iPhone 6 to 15% iPhone 6 Plus.

In case you were doubtful the new iPhones accounted for increased market share, Good Technology also points out that iOS jumped from 66 percent of activations in July and August to 73 percent in September following the introduction of iPhone 6 and 6 Plus. “Despite not being available for the entire month of September, iPhone 6 made up 17 percent of all activations for the month of September,” the report reads. 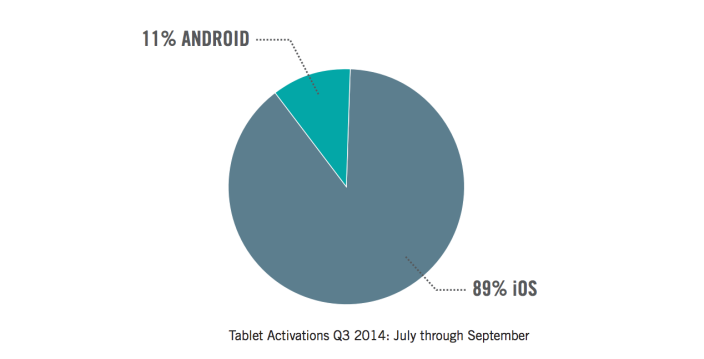 The report also shared numbers for tablet activations during the same period. Apple’s iPad continued to dominate with 89% of the market, but Android was up slightly to 11% of activations which can be seen in the chart above.