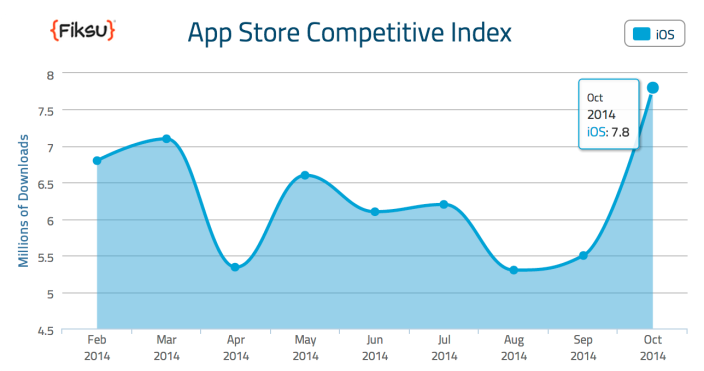 “While recent indexes have shown a steady stream of escalating costs, the October index numbers validate another important trend: the increasing importance of apps to consumers,” said Micah Adler, CEO of Fiksu. “Mobile marketers must start thinking strategically about their marketing tactics over the longer term and figure out how to use apps to connect with customers. October’s hindsight should serve as a guide for marketers preparing for impending holiday activity.”

The report points out that many of the app downloads are likely “a result of the tendency of app users to quickly re-download their ‘vital apps’ during upgrades.” The first set of apps users download on their new iPhone 6s are likely to be those they can’t live without, which makes them much more likely to become loyal users of those apps.  The trend underscores the importance of nurturing user loyalty prior to device launches and gift-giving seasons.

Despite an increase in app volume and decline in cost per loyal user, Fiksu notes that “the cost to acquire loyal users is still high” with both its Cost per Launch (CPL) Index and Cost Per Install for iOS showing increases:

October’s CPLU is up 33 percent year-over-year, and other iOS metrics were up as well. The Cost per Launch (CPL) Index, which tracks the costs of driving engagement from mobile users, showed an increase on iOS to $0.26 up 24 percent month-over-month and 39 percent year-over-year. iOS Cost Per Install (CPI) increased 21 percent from September to $1.46, for a 59 percent rise year-over-year.

Fiksu’s full report, which also tracks a number of key app related metrics for marketers suchs as cost per app launch and cost per install, is available on its website here.