Hyper, the brand behind a number of popular Mac and iOS products we’ve reviewed in the past, is today offering its best deals ever for Black Friday. The sale includes big deals on external battery packs and other iOS accessories including the world’s only external MacBook battery.

If case you’re unfamiliar, Hyper has long been just about the only company on the market offering portable external battery packs for MacBooks. Apple doesn’t let third-party accessory makers use the MagSafe adapter, so Hyper’s DIY kit for modding your cable is the reason it’s still the only one with portable MacBook batteries. Good news: There is also an option to order a pre-modified MagSafe cable directly from Hyper. We reviewed an older version of the product here.

The company is also discounting it’s HyperJuice Expand line, which we first tried out after the product launched at CES last year. I love these batteries and have been using them as my go to external batteries when on the go. You buy one head piece, which offers three usb ports for charging up to two iPads and an iPhone at the same time (18W shared), then you can purchase and swap out the various battery packs as you see fit. They attach magnetically to the head piece and come in various colours and capacities.

Other deals to check out through Hyper include $2 HyperShield Back Cover cases for iPad (Reg. $20-$40):

The company is also discounting many of its popular camera accessories for iOS devices: 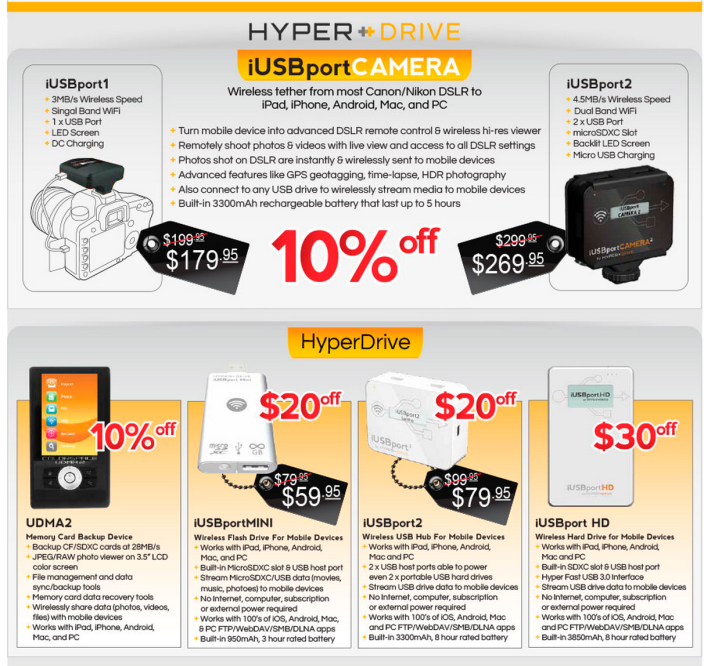 Lastly, today is one of your first chances to get your hands on new accessories from Hyper including the HyperDrive for MacBook microSD adapter, the iPin laser pointer for the iPhone’s headphone jack, and a compact mirror that integrates a 3000mAh battery pack. All of the new products are available now for slightly less than they will retail for:

A full list of deals from Hyper is below: