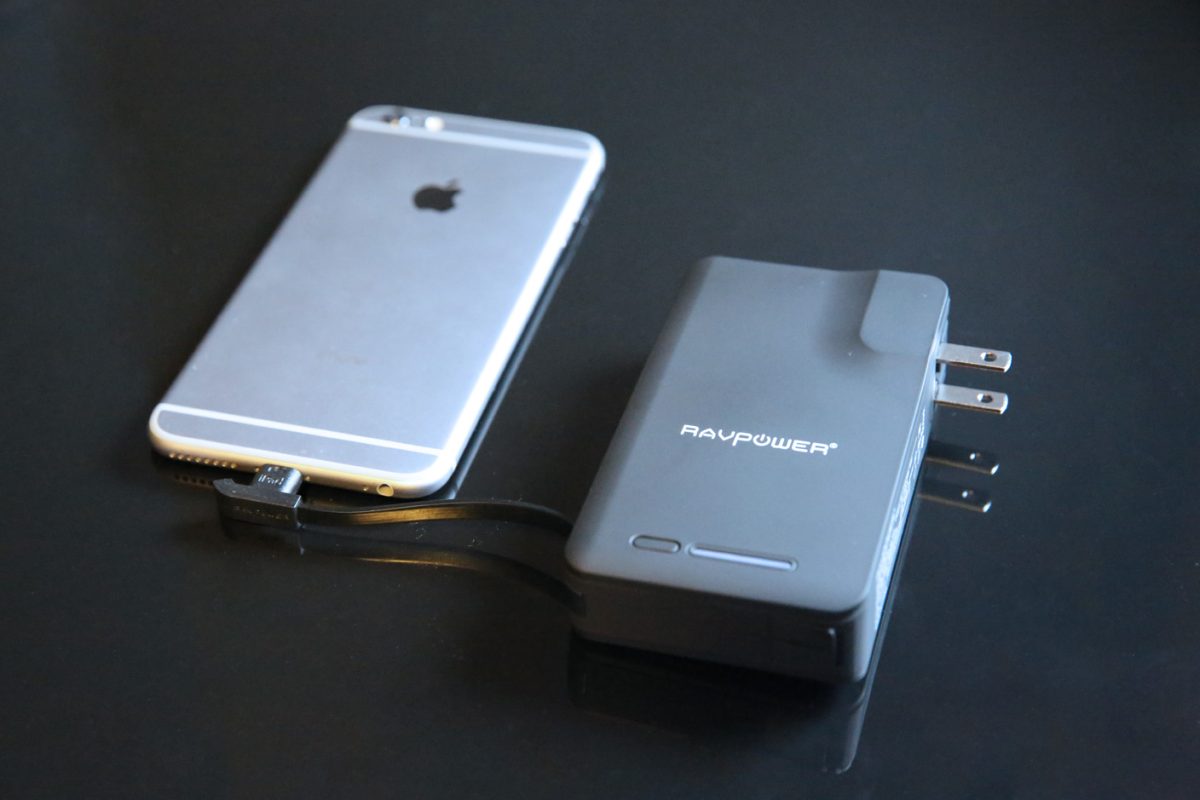 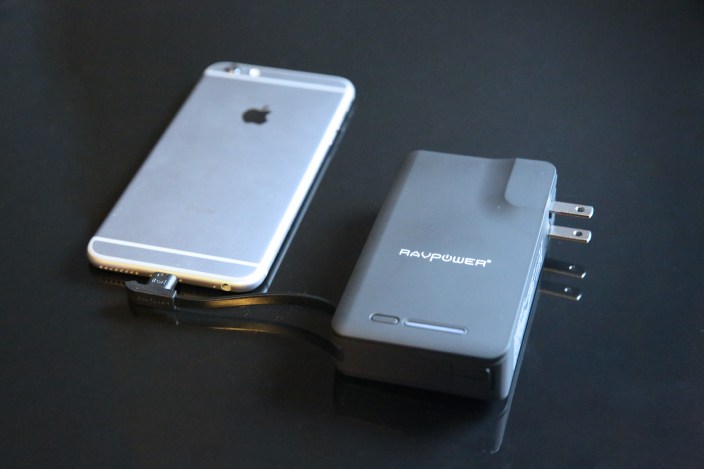 Equipped with wall blades for easy recharging, Savior combines a high-capacity 9000mAh battery with an Apple-certified Lightning cable, competing with similar accessories such as myCharge’s Hub 9000 — but for half the street price. Read on for why Savior is so easy to recommend, as well as details on the compromises it makes to keep its size and price down. 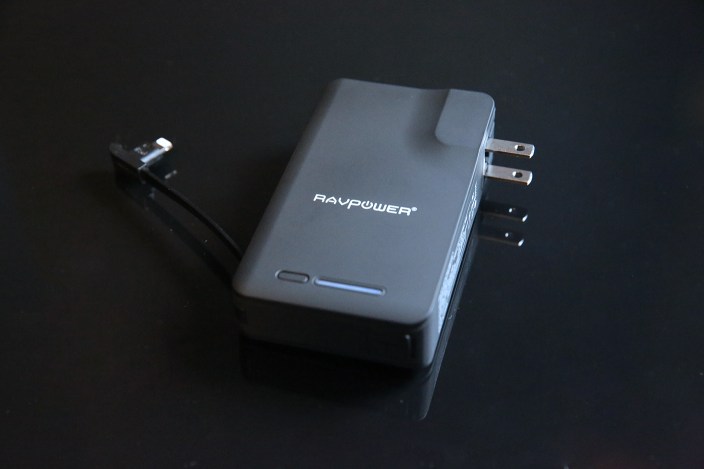 Measuring 4.5″ tall by 2.55″ wide by around 1″ thick, the latter tapering and flaring around fold-in wall blades, Savior is offered in two versions: one with a Lightning cable for Apple devices, and one with a micro-USB cable for Android. Savior can charge two devices at once, the first with the cable’s tablet-friendly 2.4-Amp output, and the second via a full-sized USB port hidden inside a rubberized bottom compartment. The USB port is notably limited to 1-Amp of output, enough for iPhones and iPods. 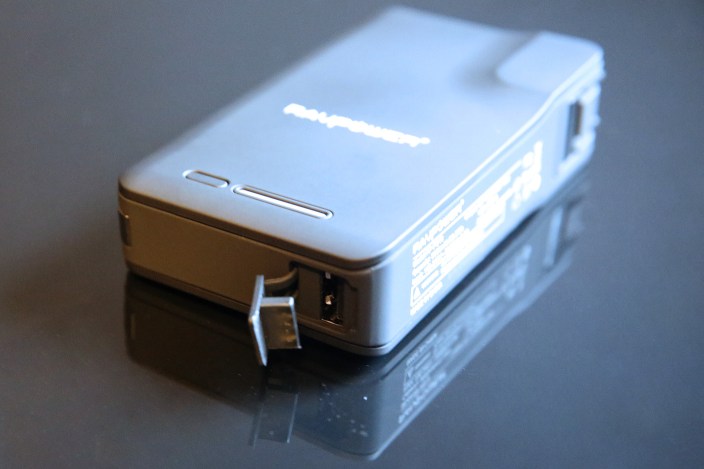 RAVPower also includes four other pieces in the box. A quality mesh fabric drawstring carrying case is large enough to hold Savior, a separate micro-USB to USB cable, a Samsung 30-pin adapter — notably not an old Apple Dock Connector, which it resembles — and a mini-USB adapter. 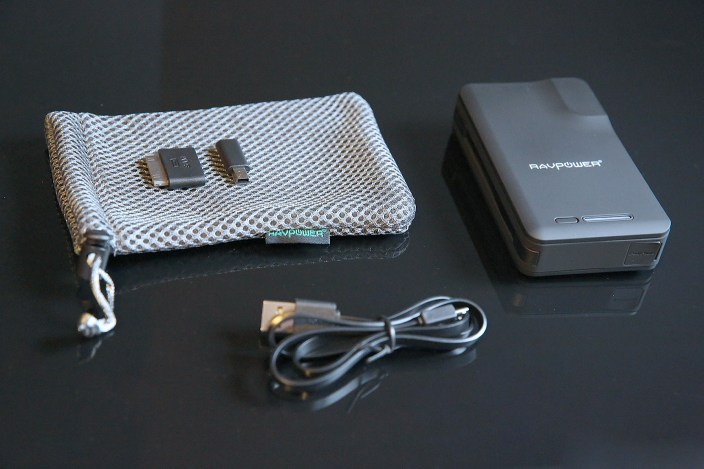 Savior’s battery performance is solid. When fully recharged, it took a dead iPad Air 2 up to 89% before expiring, which is plenty of extra power for a tablet — alternately enough for a full iPad mini charge or multiple full iPhone or iPod recharges. Activating and deactivating the battery is as simple as pressing a slightly recessed button alongside a four-LED white battery indicator bar on Savior’s front. And recharging Savior is as easy as plugging it into a wall when you’re done using it.

The issues with Savior are arguably minor given the price. First, it’s not designed to be used as a wall charger for your devices; the integrated Lightning cable is on the short side for easy storage, and the wall blades are primarily there to recharge the battery, not a connected device. Though RAVPower notes that the battery can be wall-refuelled while recharging a connected device, it warns that this can impact the battery’s longevity, so it’s probably not a great idea. Second, although Savior is very quick to refuel connected devices, its own recharging time isn’t fast — around 7-8 hours. This is somewhat surprising given that some battery vendors include wall adapters specifically to guarantee faster battery refueling. 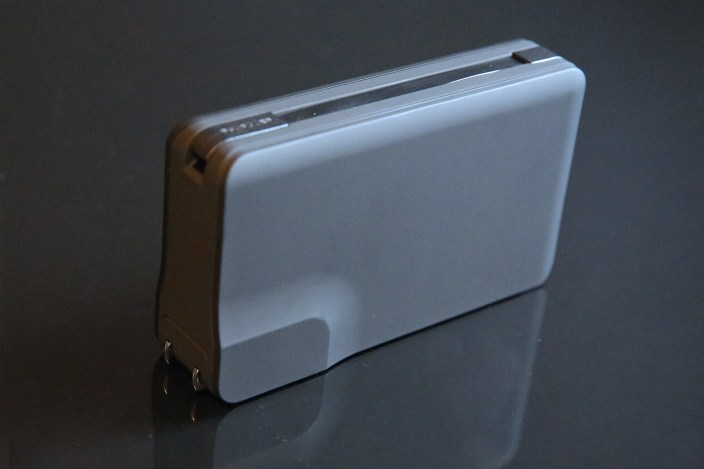 When you contrast Savior against similarly-specced competitors such as myCharge’s Hub 9000, which offers the same battery capacity with wall blades and a Lightning cable built in, the obvious differences are a huge street price gap and a few frills such as dual integrated cables, three-device charging, and faster wall recharging. You can decide for yourself whether those differences are worth twice Savior’s street price, but we’d be hard-pressed to say that they are, and Savior’s great Amazon reviews (currently 4.9/5.0 versus 4.1/5.0 for Hub 9000) are a testament to strong customer satisfaction. For $50, Savior would be an appealing 9000mAh battery even if it didn’t have a Lightning cable and wall blades built-in; given everything you get in the package, it’s definitely another worthwhile option from RAVPower.