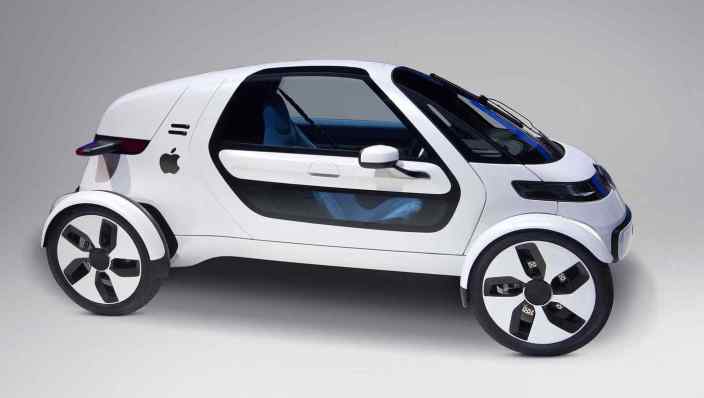 Unless you’re Seth Weintraub, the idea that Apple would more likely develop a car than a search engine would have been controversial — as shown above, even The Onion-level comical — two weeks ago. That’s changed. Following public sightings of Apple-leased vans that looked a lot like street view mappers, numerous reports have substantially confirmed that Apple’s working on an electric car, quite possibly a self-driving car. Blessed with great insight (and sources), Seth already highlighted some of the big picture reasons Apple would get into the automotive industry before most people had accepted it as reality.

Now that the dust has settled, and even non-believers are acknowledging that an Apple Car could be coming in the not-too-distant future, it’s time to look at the big picture for Apple and the automotive industry. Below, you’ll find five big reasons the Apple Car is happening, as well as five big potential issues worth considering.

Here’s Why The Apple Car Is Happening

Apple’s decision to develop a car is not as simple as saying that computers are ubiquitous, inside basically everything at this point, so “why not a car, too?” Developing a car is a huge undertaking, requiring even more engineering, safety, design, marketing, and retail talent than Apple already had — arguably an entire second company worth of highly specialized people. This isn’t a project that happens on a lark: it is a deliberate, bold statement that Apple isn’t going to be constrained to making products that can be carried around. Whatever you think about the sanity of Apple taking on something this huge, it certainly doesn’t lack either ambition or confidence.

2. The Auto Industry Is Ripe For Disruption

Years ago, some fairly high-level people at Apple told me that working with the auto industry on car integration solutions was a nightmare. The cars produced today were by and large designed six to seven years ago, a lag that has given automakers plenty of time to transition their concepts from clay models into manufacturable components and finished products. That timeline doesn’t work for technology companies, particularly Apple. Someone at Apple has already developed an in-car iBeacon system to automatically open your garage rather than requiring you to press a garage door opener. But it’s probably sitting on a shelf because car makers won’t be ready to implement it until 2020.

Apple loves going after profitable, slow-moving targets that don’t think it has a chance of disrupting their industries. Even if Apple’s development efforts fall a year behind, these companies are the least capable of changing course in time to stop Cupertino from making another big dent in the universe. And Apple has a real chance of changing the world here.

The portion of your car’s dashboard that contains a screen is called a Center Stack, and if you haven’t already noticed, it’s a trainwreck. Old resistive screens, map technology that hasn’t substantially changed in a decade, and menu after menu of buried options — it’s no wonder that people would sooner use their iPhones in the car than depend upon the car for mapping, entertainment, or communications. Apple has known all of this for years and been forced to cooperate with less capable software and hardware companies just to get iPhones to work in (most) cars.

At an absolute minimum, Apple’s work could lead to a hugely better center stack experience for users — radically simplified in-car environmental controls that coordinate everything from music and communications to temperature, ambient noise, and the display of maps. But Apple doesn’t appear to be aiming that low. The people it’s hiring have expertise in the mechanical systems and industrial designs of cars. Sure, all of them could be tied into a radical reengineering of the center stack, but most of the expertise is a lot too specific for that. Apple’s CarPlay team reportedly consisted of one engineer and one manager; you don’t need an army to build just a better in-car computer.

4. Electric Cars Have Created An Opening

This one almost goes without saying, but the automotive industry is in the midst of a historic pivot away from gas engines to partially and fully electric vehicles. Change is coming, and fast, presenting a one-time opportunity for companies with the right combination of technology and money to become major players in a historically chummy business. Apple has so much cash on hand that it’s been literally taking advice from shareholders about how to give it away. This is a chance to leverage those dollars for a better purpose.

Apple’s defining philosophy during the Steve Jobs era was to make complex things simple. Tim Cook appears to be expanding that theme outwards, suggesting that Apple is here to improve the quality of peoples’ lives. Making a car easier to drive and enjoy riding in would have been a pretty big step forward — a Jobs-caliber aim, perhaps beyond the typical Jobs budget — but a car that can drive itself goes past that into the realm of near-utopian, science-fiction fantasies. If a company with no automotive track record like Google can chase it, so can Apple.

A. Who Is It Going To Be For? Historically, Apple products were expensive, and there are very few examples where the company has actively chased the lowest end of a market it’s entered. Moreover, Apple’s recent hires for its wearable division have substantially been experts in selling and marketing luxury products, signaling a potential shift away from the days of $149 iPod nanos towards not-terribly-dissimilar $349 Apple Watches.

With multimillionaire executives whose taste leans towards ultra-premium cars, it’s hard to imagine Apple — a dogfooding company if ever there was one — releasing a popular but typically dowdy minivan, or a tiny, cramped car designed to milk maximum power from a rechargeable battery pack. Tesla’s initial focus on upscale vehicles must have been inspirational to Apple here, but who knows what form the first Apple Car would take, and who it will be targeted towards?

B. Is It Ever Really Going To Happen?

Apple’s projects tend to take years before coming to market, and the company famously says no to a thousand things for every yes. That this many people are apparently working on the project — and that Apple is still actively hiring for it — suggest that this project got a big yes and isn’t getting shut down over small hurdles. But there are a lot of steps left to take before a car comes to market, and the timeline for release is certainly years (plural) away, at the earliest.

C. What About Apple Maps?

Pointing to a widely-publicized though arguably trivial iOS app screw-up might seem like a cheap shot to take at the future of a self-driving car, but the core of any Apple-developed autonomous car would be an Apple-designed navigation system reliant on Apple-sourced maps. Even today, years after Maps first debuted, a very substantial number of iOS and Mac users ignore it in favor of Google Maps. Most of the Apple Maps app’s and service’s roughest edges have been repaired, but the messy launch hasn’t been forgotten, and Apple’s going to need to show that a self-driving car is on much firmer ground.

D. What Sort of Sales Potential Does An Apple Car Actually Have?

When you consider various pricing scenarios for a first-generation Apple Car, it’s clear that initial sales aren’t going to be huge — and Apple’s production capabilities probably will be limited, as well. Over the course of the Roadster’s lifetime, Tesla sold fewer than 2,500 of its first car, though the price tag was over $100,000. The subsequent Model S has sold a total of roughly 57,000 units with a starting price of roughly $60,000. These days, Tesla has announced $55,000 and $35,000 cars as its next two steps.

Compare that with Ford’s Focus, the best-selling car in the world, which now sells over 200,000 cars every year. The base MSRP is around $17,000. Despite the fact that Focuses are safe and entirely adequate vehicles for millions of existing customers, it’s a safe bet that Apple’s not going to attempt to compete with that sort of pricing for years.

Apple’s track record with first-generation products is decidedly checkered, and it’s widely understood that the original MacBook Air, Apple TV, and iPhone had some design and manufacturing issues that required substantial changes; each went on to much greater success in subsequent generations. Sensing a similar potential for issues with the upcoming Apple Watch, many people have said that they’re planning to hold off and see what comes next.

But even that checkered track record most recently includes some major first-generation hits, notably including the iPad and iPad mini, which had no serious defects after launching (even if they did get substantially better only a year later). Moreover, most people are using the third- or even seventh-generation versions of Apple’s products at this point, and have such hugely positive impressions of their MacBooks, iPhones, and Apple TVs that past versions are practically ancient history. It’s safe to say that there will be enough people interested in an Apple Car that concerns like these won’t stop it from being a success, at the right price.

Readers, what do you think? Is Apple going to release a car? When? What segment of the market would it likely target for the first release? Share your thoughts below.