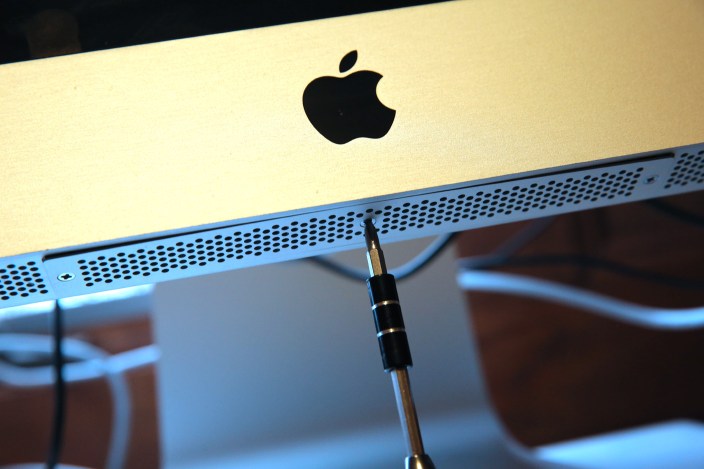 As I’ve spotlighted over the past month, the best way to dramatically speed up an older Mac is to replace its old hard drive with a new solid state drive (SSD). The process is super-easy on MacBooks and Mac Pros, surprisingly manageable on iMacs, and challenging on Mac minis, yielding 3X to 5X speed boosts. But there’s another option that can speed things up with relatively little effort or expertise: upgrading your Mac’s RAM.

RAM upgrades are easy and cheap. You can expect to pay $90 or less for enough (Mac-safe) RAM to run OS X Yosemite without hiccups, or $180 for enough RAM to guarantee you won’t need more for years. Installing RAM generally doesn’t void your Mac’s warranty, and except for several models, the only tool you’ll need is a small screwdriver. Below, I’ll walk you through your best options. 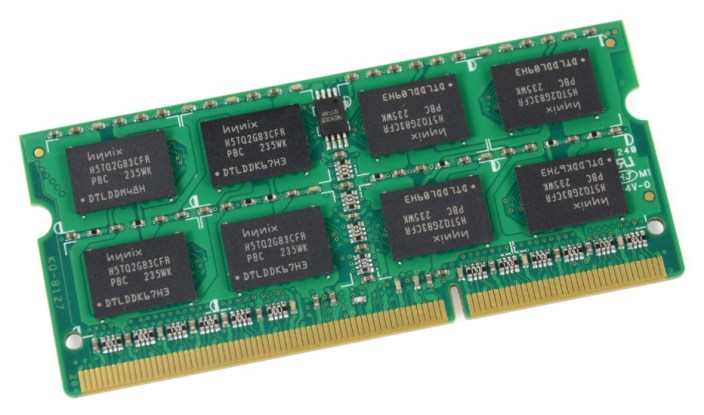 Without getting too technical, RAM (random access memory) typically refers to a small replaceable circuit board full of memory chips, designed to give your computer a high-speed temporary work space — the place where apps and data are stored while you’re actively using them. More RAM lets your computer run bigger apps and more apps at the same time, reducing or eliminating the need to continuously load data from your hard disk or SSD.

Most current Macs ship with 4 or 8 gigabytes (GB) of RAM. Several years ago, there were more 4GB Macs out there, but today, if you don’t have at least 8GB of RAM and are running OS X Yosemite, you probably would benefit from more RAM. I personally have 8GB in my Retina MacBook Pro and 12GB in my iMac; neither has obvious RAM-related issues. By contrast, 4GB Macs are very limited in running multiple apps at once, while 16GB machines aren’t much different from 8GB or 12GB Macs except when running professional-quality (generally video editing) apps. If your Mac can run Yosemite, it can probably be upgraded to at least 8GB of RAM, if not more.

Apple typically makes Mac RAM swaps as simple as using a small screwdriver to open a panel, where you push down on clips to release the RAM boards, then pop the new RAM into place. Most Macs have two RAM slots, each arriving filled, such that a 4GB Mac will have two 2GB RAM boards inside, and an 8GB Mac will have two 4GB RAM boards inside. Many iMacs and all Mac Pros have four slots. While the iMac uses high-quality but consumer-grade RAM, the Mac Pro typically uses some of the most expensive RAM available, and the base model currently ships with 12GB of RAM installed. 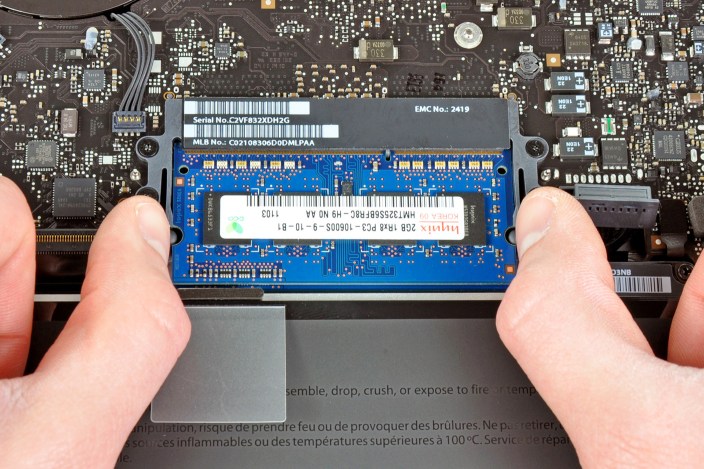 How Can You Be Smart About Swapping RAM?

I’ve upgraded the RAM in numerous computers over the years, and learned a hard lesson in the process: do not under any circumstances attempt to cheap out when you’re putting new RAM into a Mac. Let me repeat that: whatever you do, do not cut corners on RAM. Windows PCs (and, indirectly, their owners) tend to be somewhat tolerant of imperfect RAM. System crashes, app crashes, failures to boot — these sorts of problems are common enough with PCs that it’s hard to trace their causes. I’m not saying this to be snarky; bad RAM is only one of a bunch of factors that can contribute to a PC’s instability.

But on Macs, I’ve found that these sorts of issues very commonly come down to bad RAM, more specifically, cheap RAM that worked fine when it was purchased but started exhibiting problems after a system update. You might save $10 or $20 on RAM that seems trouble-free with OS X Yosemite, but has issues with the next OS X release. I’ve personally seen this happen, and in the process of trying to figure out what went wrong, I’ve read hundreds (if not thousands) of identical user complaints on Apple’s Support Discussion Forums. Cheap RAM is a far more common failure point for Macs than people realize.

You can replace the RAM boards separately, but it’s generally wise to swap pairs of two at the same time to avoid any subtle specification differences between the old and new RAM. Historically, it was considered safest — though not mandatory, and I don’t always follow it — to have the same amount of RAM in each of two slots. (Four-slot machines could have two separately matched pairs.) 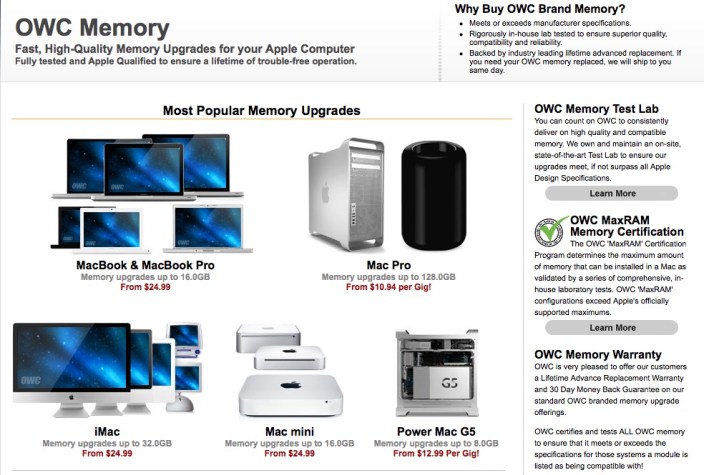 Your best move is to buy the right RAM from a reliable vendor on day one. For this particular type of upgrade, I personally recommend Other World Computing’s OWC Memory selector page. It’s highly visual, cleanly organized by Mac model, and makes very clear what your specific machine’s RAM options are — including online installation videos to show you what needs to be done.

I’ve also used Crucial RAM in the past, with mixed results — one of my “works today, fails a year later” RAM experiences was a Crucial upgrade, but if you’re tech-savvy enough to sort through confusing part numbers, Crucial’s RAM can be good. Sometimes Crucial’s prices are lower than OWC’s, but OWC’s installation videos and the absence of post-purchase problems have tended to be worth the small premium. I’ve been very happy with the OWC parts I’ve purchased for Mac upgrades, including the ones featured in my iMac SSD update guide.

As long as you follow a single guideline — get at least 8GB of RAM for your Mac — pretty much any older Mac you want to upgrade will be better off than it was before. The type and quantity of RAM you’ll need will depend both on the Mac you’re using and the things you personally do with it. Here are some Mac-specific pointers that could help guide your decision.

MacBook/MacBook Pro. These two-slot machines are typically limited to a maximum of 16GB of RAM, though older models are capped at 8GB. Use this OWC page to find the right RAM for your specific MacBook or MacBook Pro model, and go with a 4GB + 4GB (total 8GB) kit unless you’re in one of two situations: if your MacBook/Pro still has a non-SSD hard drive which you don’t plan to replace, or you do video editing on your laptop. In those situations, consider 12GB (4GB+8GB) or 16GB (8GB+8GB) kits instead. (Note that the Retina MacBook Pro does not have user-replaceable RAM.)

MacBook Air. Like the Retina MacBook Pro, you can’t upgrade the RAM directly in the MacBook Air, and strictly speaking, you’re out of luck for RAM expansion unless you’re willing to have the main logic board updated. But you can easily add more storage, either through an SSD upgrade (faster, more expensive) or the 13″ Air’s SD card slot (cheaper but slower). That slot is capable of holding a 64GB or 128GB flash expansion card that sits almost flush with the laptop’s edge. Transcend’s JetDrive Lite (64GB/$37, 128GB/$74) is a highly-regarded option with a 4.5/5-star Amazon rating; and The MiniDrive lets you self-supply a Micro SD card of your chosen capacity for $20. These tiny drives also work in the 13″ and 15″ Retina MacBook Pros.

iMac. Every iMac released since 2009 can be updated to at least 16GB of RAM, and quite a few models (mostly but not exclusively 27″ iMacs) can handle up to 32GB of RAM in four memory slots. OWC’s iMac memory page will take you to the correct RAM for your machine. I personally have 12GB of RAM in my 2011 27″ iMac and feel that it’s the right minimum amount of RAM for my daily professional use, but if you’re not planning on doing video editing or running a lot of apps at the same time, 8GB is fine. Similarly, if your iMac is being used heavily for professional, time-sensitive tasks such as creating videos, music, or complex documents, consider a bump up to 16GB of RAM, possibly more.

Mac mini. Mixed news here: starting with the 2014 Mac mini, Apple stopped including user-replaceable RAM in this machine, so that’s not an option. But Mac minis sold from 2010 to 2013 can be upgraded to 16GB, and 2009 models are capped at 8GB. This OWC page will guide you to the right RAM for each Mac mini; my general advice is to stick to 8GB unless you’re really leaning on your mini as a workhorse for professional apps or numerous apps at once. That’s not the common usage scenario for a mini, so a modest upgrade will be fine.

Mac Pro. This beast of a professional computer has the ability to use up to 128GB of RAM — Apple notably says 64GB (using four 16GB RAM boards), and ships with a minimum of 12GB (three 4GB RAM boards) installed. OWC’s Memory page spotlights all of the available Mac Pro RAM options, explaining in small print that you’ll need OS X Mavericks or newer to make use of over 96GB of RAM. As a general statement, if you’re using a Mac Pro, you probably need at least 12GB for whatever professional applications you’re using, and 16GB or more certainly won’t hurt.

If you’re looking for more (and much faster) storage rather than more RAM, check out my guides to replacing Mac hard drives with solid state drives, starting with iMacs, continuing with Mac minis, Mac Pros, and regular MacBooks, then finishing with MacBook Airs and Retina MacBook Pros. The installation of SSDs requires a little more work and precision than swapping RAM, but you’ll notice even bigger performance jumps, particularly if you’re willing to buy the latest and greatest SSDs recommended inside.