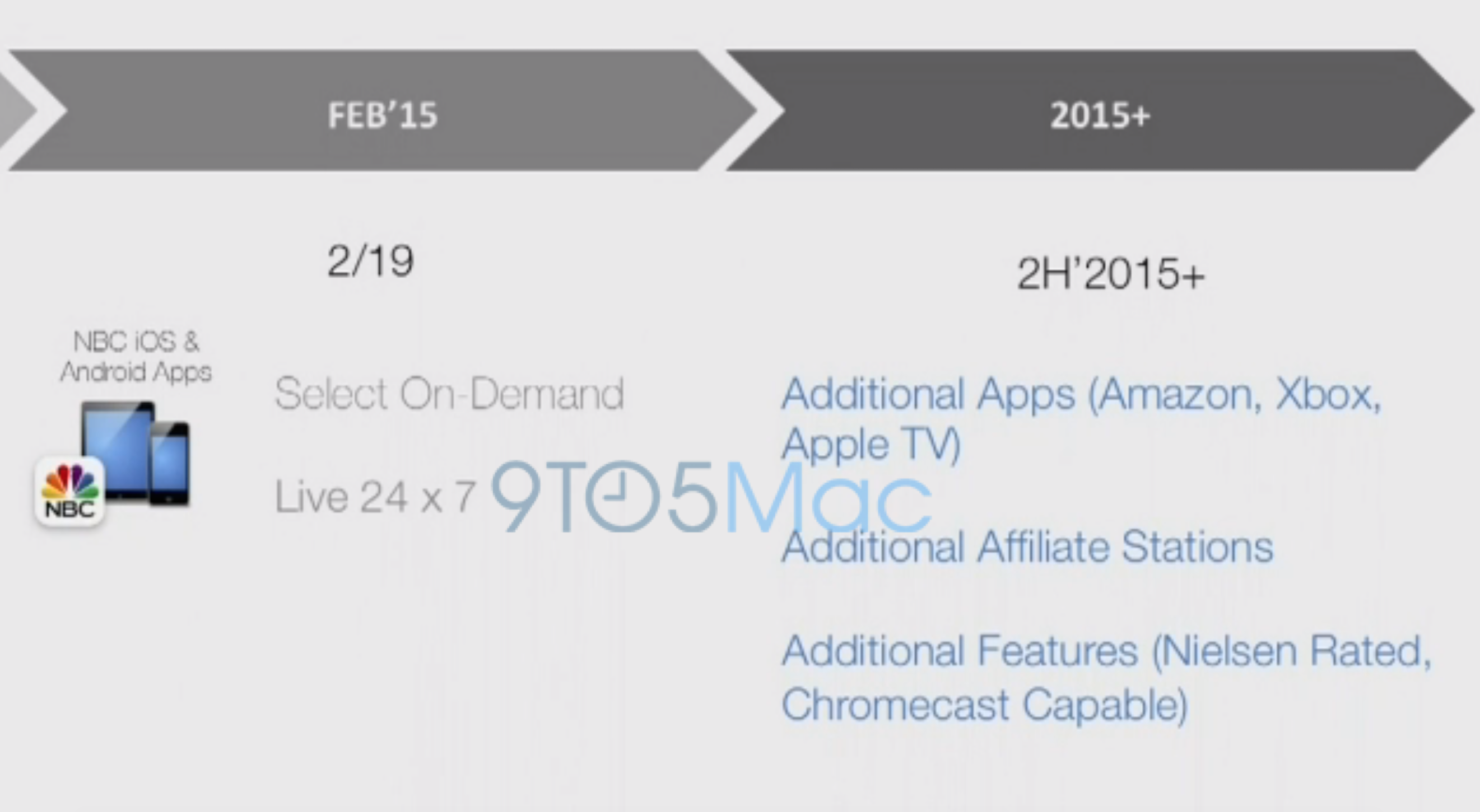 Despite reports that NBC Universal is not involved in negotiations for Apple’s upcoming subscription TV replacement service, NBC still hopes to arrive on the Apple TV as soon as the second half of 2015, according to a source with knowledge of NBC’s digital roadmap. A recent presentation slide provided by the source shows that NBC wants to launch Apple TV, Amazon Fire TV, and Xbox apps during the second half of this year, following its existing apps for iOS and Android devices. NBC also would like to add new affiliate stations, Nielsen Rating integration, and support for Google’s Chromecast…

Yesterday’s report from The Wall Street Journal said that NBC is not involved in negotiations for the new Apple subscription television service due to a “falling-out” between Comcast and Apple, which likely affected Apple’s planned mid-2014 launch of new Apple TV hardware, software, and services. Despite this falling out, it appears that NBC executives still want NBC on the Apple TV regardless of whether it’s included in the $30-$40 service. According to the source, the NBC Apple TV application currently in the works will function similarly to other content apps on the current Apple TV model.

Like some of the Apple TV’s other television streaming apps, NBC’s upcoming app will require a cable subscription, requiring the user to verify an existing cable account. That’s the model NBC hopes to continue this year on the Apple TV if talks for the Web TV service continue to stall. According to the source, NBC Universal is still in negotiations with local affiliate networks across the United States to ensure that cable box customers will be able to verify themselves across the country on the Apple TV. The NBC Apple TV app will allow customers to “tune into local news and syndicated programming” at no additional cost, according to the source.

Yesterday’s report indicated that 25 channels, including ABC, CBS, Disney, and Fox, are in talks for the Apple Web TV service. Currently, Apple TV users can access content from the likes of CNBC, ABC, Fusion, and The History Channel, in a fashion identical to the NBC application currently in development. Apple recently announced a brief exclusivity deal with HBO Now, which will kick off in April. According to sources, Apple is working on a new Apple TV box with a thinner form-factor, redesigned user interface, and upgraded remote controller with improved button tactility.