Even though the long-delayed Up3 isn’t shipping until later this month, Jawbone this evening has taken the wraps off of two new fitness trackers, the Up4 and the Up2. The latter is a replacement for the Up24 released in 2013, while the former is a new fitness tracker by the company. The Up4 most notably adds support for on-band wireless payments from American Express. Both watches pair with your iPhone over Bluetooth.

Other than the addition of NFC for wireless payments, the Up4 is nearly identical to the Up3. It features heart-rate tracking and sleep analytics. The Up4 will be available later this summer for $199, which is $20 more than the Up3. 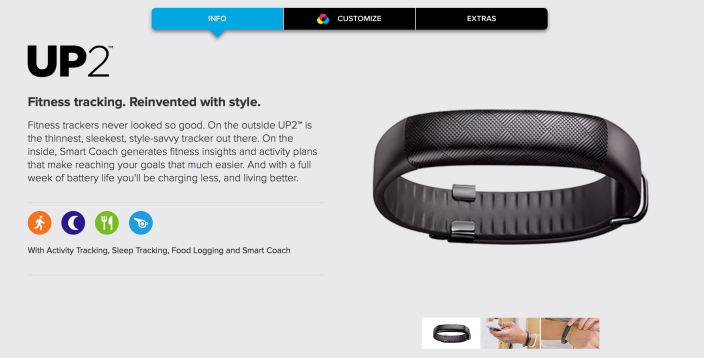 The Up2 is similar to the Up3 in terms of design. It features an adjustable strap and is 45 percent smaller than the Up24 that it is replacing. The Up2 offers vibrating notifications and Jawbone’s smart alarm clock, which tracks your sleep and wakes you up at the best possible time. The Up2 is available now from Jawbone, Amazon, and BestBuy for $100.

Both of Jawbone’s new offerings come at an interesting time in the wearable space. The Apple Watch is set to start arriving to pre-order customers on April 24th and also includes the ability to wirelessly pay for products when paired with Apple Pay. While the Jawbone Up2 and Up4 are cheaper than the Apple Watch, we’ll have to see if they compare in terms of quality.