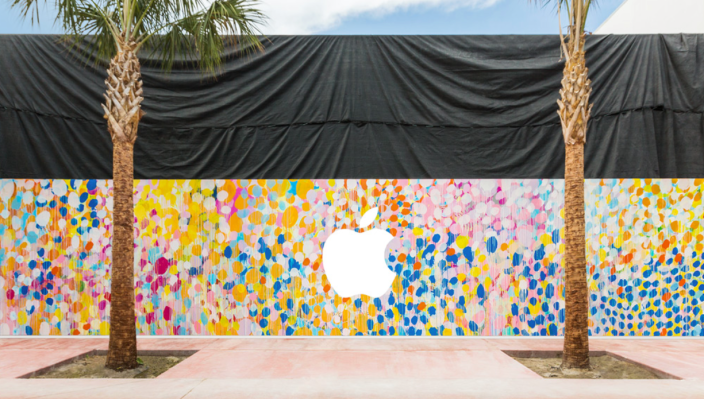 Apple has been using murals created by well-known artists to launch new Apple Store a lot recently. In Hangzhou, China the company debuted a calligraphy mural alongside a new retail location, while a store in Chongqing, China got a similar treatment. Earlier this month, Apple revealed that its upcoming retail location in Miami would launch with a mural designed by internationally acclaimed artist HENSE. Apple this evening has updated its website with an image of the mural at its new Miami store, as well as specific opening information.

The Apple Store on Lincoln Road in Miami Beach, Florida will have a grand opening on Saturday, April 25 at 10:00AM EST. The store replaces an existing location at 738 Lincoln Road. The new location is 1021 Lincoln Road.

As for the mural, Alex Brewer, also known as HENSE, combined the techniques of street art and abstract painting to create the incredibly colorful design. Brewer is able to capture the dynamic energy of street culture, which is something for which Lincoln Road in Miami is known. You can view a gallery of images from HENSE’s design process of the new Apple Store mural below: