The best Mac and iPad keyboards 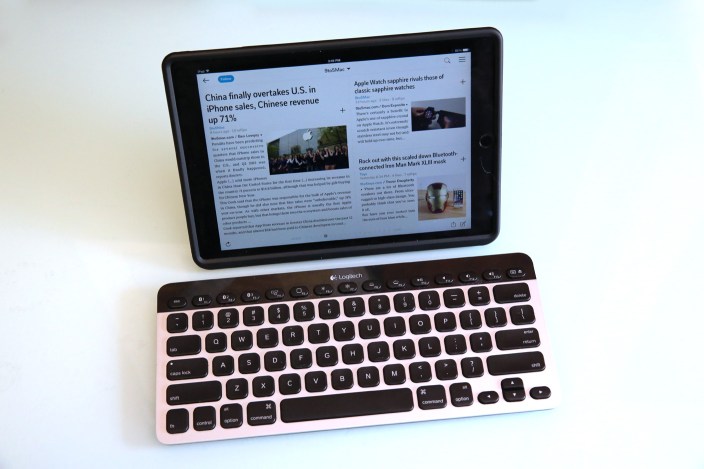 Keyboards are important — so important that many people won’t “work” on their iPads without real keys to type on. No one complained when desktop mice gave way to laptop trackpads, or when trackpads evolved into tablet touchscreens, but the switch from physical to virtual keyboards has been met with plenty of resistance… specifically because virtual keyboards offer no resistance. There’s something about the responsive, up and down movement of actual keys, known as “travel,” that people clearly prefer over tapping on completely flat glass.

I’ve tested a lot of keyboards, and since I rely upon them professionally every day, I have some strong opinions as to the best options for different types of Mac and iPad users. You might be surprised by my advice, as it bucks a couple of Apple’s trends (“smaller!” “thinner!”), but if you’re like me, you’ll be a much happier typist if you “think different” on this topic than the folks in Cupertino… 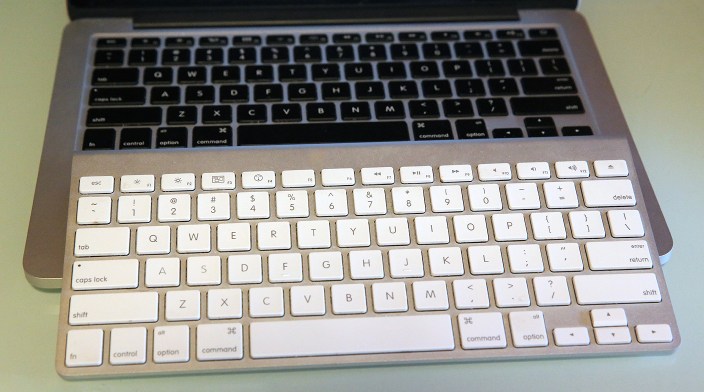 Are You Better Off With A Wired Or Wireless Keyboard?

Over the past five years, wireless keyboards have become the default choice for both Mac and iPad users. Apple’s 2010-vintage iPad Keyboard Dock never took off, while third-party iPad Bluetooth keyboards flourished. On the Mac side, Apple made its $69 Bluetooth-based Apple Wireless Keyboard the standard pack-in for iMacs in late 2009, bringing its desktop computers and MacBook laptops into harmony with nearly identical designs. As you can see above, the Wireless and MacBook keyboards are so similar (except for key color) that you can move from one to the other without any effort. Whether you’re using an iPad or a Mac, the Apple Wireless Keyboard is a great keyboard. But it does have one major issue, which is particularly annoying if you’re using it all day long with your work computer.

That’s battery life. The current version of the Wireless Keyboard requires two AA batteries, down from three in the original model. But even if you’re using the official Apple Battery Charger with Apple-branded rechargeable batteries, you can expect to see the “Keyboard Batteries Low” warning pop up on your screen often, becoming even more frequent as the batteries age. No third-party solution (including Mobee’s well-intentioned Magic Bar and Battery Pack) truly fixes this problem; the best workaround I’ve found is Mobee’s Power Bar (shown below), which lets you permanently connect a micro-USB cable to the Wireless Keyboard for power. It’s not ideal, but it worked for me for a while. 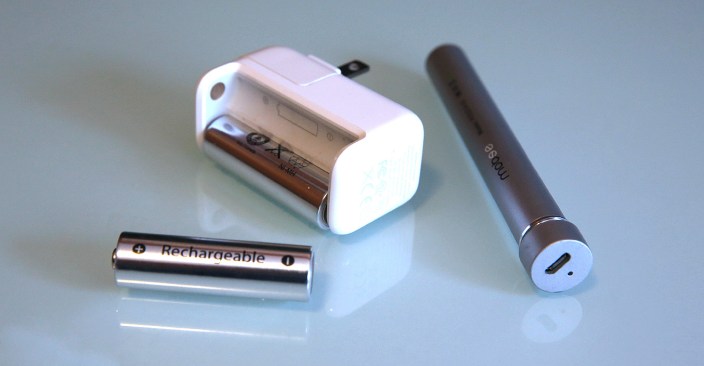 My first piece of advice is to seriously consider how you plan to use your Mac’s or iPad’s keyboard. If it’s going to be sitting on the same desk all the time, and used with the same Apple device — particularly a Mac — you may well be better off with a wired keyboard that doesn’t require batteries and doesn’t compromise your typing comfort in any way. But if you plan to move your keyboard around a lot, or really hate having a wire connected to your Mac or iPad, a portable wireless keyboard will probably be a better option for you. Both types of keyboards are discussed below. 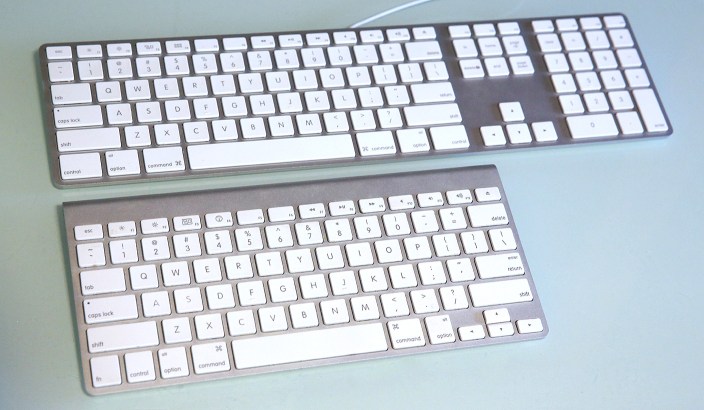 The Mac keyboard I personally use is something different: Apple’s Wired Keyboard with Numeric Keypad (above), which can currently be had for around $49. Made from a solid piece of aluminum with plastic keys, it’s obviously wider than the Wireless Keyboard, but not as deep, and uses USB 2.0 rather than Bluetooth to connect to your Mac. The main keys are in the same places as the Wireless Keyboard’s, but the wired version gives the arrow keys more breathing room while adding dedicated page up, page down, and other buttons, most notably a full numeric keypad. While I personally don’t use the extra keys all that often, the keypad is handy during tax season and for using the Mac’s Calculator app.

The Wired Keyboard with Numeric Keypad is the only USB keyboard Apple currently makes. In 2009, it briefly introduced a version without the numeric keypad that was alternately called the Apple Keyboard or the Wired Compact Keyboard (shown above). But it was oddly discontinued very quickly, disappearing from Apple’s lineup in late 2010, and is now only available online at a fairly steep premium.

Apple’s Wired Keyboards hide a useful feature underneath their keys: twin USB ports. There’s one on each side, and they can be used to connect certain USB accessories as needed. Unfortunately, the ports don’t work properly with iPhones or iPads, which really should be plugged directly into your Mac for charging. It’s been years since I’ve relied upon keyboard-mounted USB ports for anything, but Apple’s wired keyboards have included them for wired mice, flash drives, and other low-power peripherals. 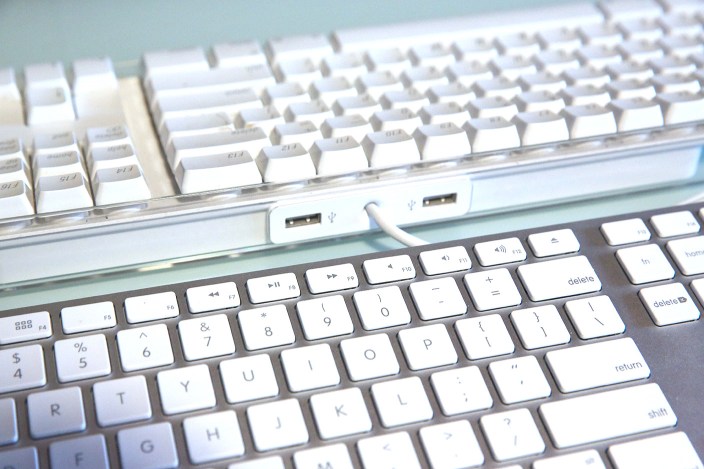 This is how Apple previously implemented USB ports in its 2003-vintage (and long-discontinued) Apple Keyboard, which weighed around 2 pounds on its own. The company hasn’t sold a typing surface anywhere near as large or as heavy as this in many years, and is currently testing an even thinner keyboard with noticeably less key travel in the 12″ Retina MacBook. Notice how tall the old keys used to be compared with the current ones. They used to be noisier and extremely tactile, responding with audible “plunk” sounds as you pressed them.

If you want a part-time numeric keyboard, Newer Technology now sells a $55 Bluetooth Aluminum Keypad (left) that perfectly matches the look of Apple’s Wireless Keyboard in white, with a black version (center) that matches MacBook keyboards instead. Alternately, Satechi has an Aluminum Finish USB Numeric Keypad for $20 (right) if you want a wired solution that is a pretty close but not quite perfect match for Apple’s keyboards, at a lower price.

Wireless Keyboards for Mac and iPad 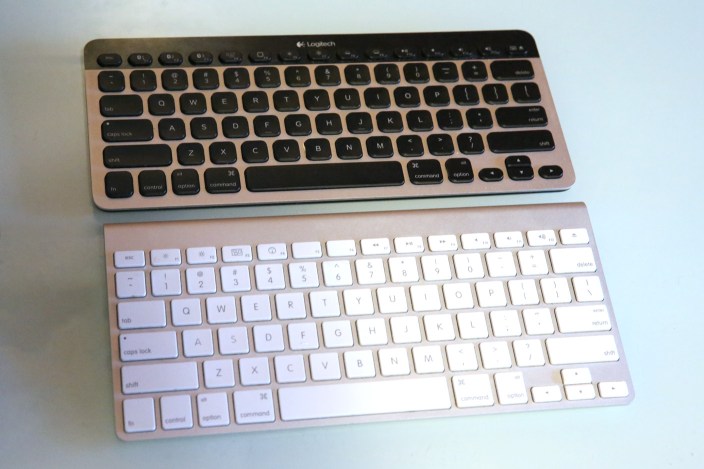 Although the aforementioned Apple Wireless Keyboard is the easiest Bluetooth option to recommend to Mac and iPad users, it’s not the best. That honor belongs to Logitech’s Bluetooth Easy-Switch Keyboard K811, which addresses every one of the Apple keyboard’s issues. Battery drain isn’t a problem, because it has a rechargeable battery inside, and can be refueled while you type using an included micro-USB cable. The keys are backlit like the ones in MacBook laptops, so you can see them in the dark. They’re also extremely comfortable to type on, despite the fact that K811 is thinner and easier to pack up for portable use than the Apple Wireless Keyboard. 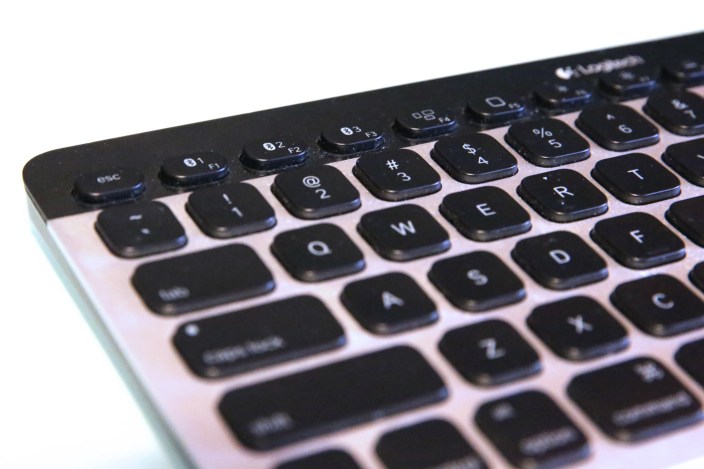 The killer feature can be seen above on the F1/F2/F3 keys. K811 can be paired with three separate devices, such as your Mac, iPad, and Apple TV, with buttons that let you switch between them in one or two seconds. This feature works incredibly well, and the keyboard’s function keys have features that are useful across multiple Apple devices. While K811 isn’t cheap — it has a $100 MSRP — its aluminum top makes it feel like an Apple product, and its great collection of features makes it worth serious consideration for Mac and iPad users alike.

Contrast the K811 against the iPad mini-specific and iPad Air-specific keyboards shown to the left in this picture; you can get a sense of how cramped wireless keyboards become when developers narrow them to match the width of Apple’s tablets. I have never tested an iPad mini-sized keyboard that feels good enough to recommend over an Apple Wireless Keyboard, so my recommendation for mini users is simple: get a separate wireless keyboard such as one of the options mentioned above. Similarly, only the very best of the iPad Air-sized keyboards are just wide enough to provide a typing experience on par with Apple’s keyboards. Anker’s Bluetooth Folio Keyboard Case for iPad Air 2 (shown at left above, reviewed here) is a great budget-priced option for only $40, primarily because it is actually a little wider than the iPad it holds, and doesn’t cramp its keyboard to achieve unnecessary thinness. 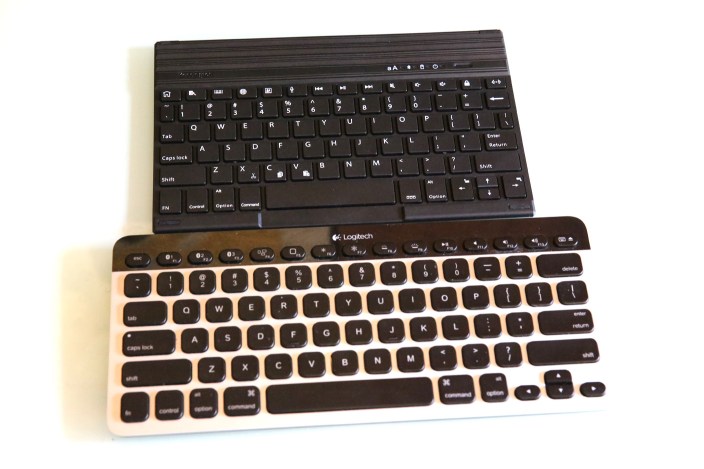 There are many other options for iPads, such as the boxy jet black keyboard above, which is found inside the $50 Kensington KeyFolio Pro for iPad Air. But the compromise is almost always the same: finger comfort — sometimes also missing keys — in order to achieve a smaller size. A conspicuous recent lull in new third-party keyboards for iPads suggests that Apple and third-party developers are working on something new for release later this year. For now, the safest iPad model-agnostic alternative is to pair a ZeroChroma stand-equipped case with either Apple’s or Logitech’s keyboard, giving you the benefit of an excellent keyboard whenever you need it, and a thin, well-protected iPad the rest of the time. 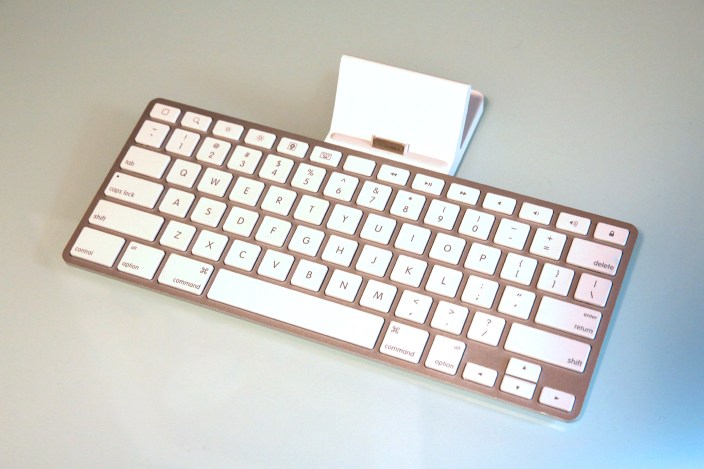 The most obscure of all keyboards is the iPad wired keyboard, a near-mythological beast that shuns Bluetooth and USB in favor of Apple’s proprietary Lightning connector. Apple gave up on making wired keyboards for the iPad after releasing the iPad Keyboard Dock (above) in 2010. It wasn’t popular, perhaps because the rigid plastic dock in the back made it awkward to carry around; subsequent wired keyboards haven’t attempted to include integrated docks. 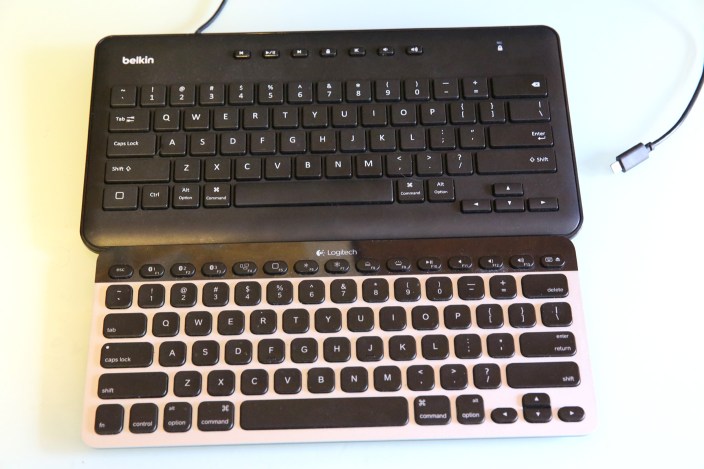 Today, Belkin sells a sub-$60 option (above) called the Secure Wired Keyboard with Lightning Connector for iPad, which is very similar in price and features to not particularly popular Lightning keyboards from Logitech and Macally. All of these keyboards are plasticky, not particularly compact, and no bargain compared with even well-made wireless alternatives. But if you can’t use Bluetooth for some reason, need a keyboard that doesn’t transmit whatever you’re typing wirelessly, and don’t want to worry about swapping or recharging keyboard batteries, these are options. I’ve never actually seen anyone else using one of them, but having tested a bunch, I can confirm that they do exist and work as expected.