Steve Jobs business cards up for school auction, one each for NeXT, pre-1985 Apple & Pixar 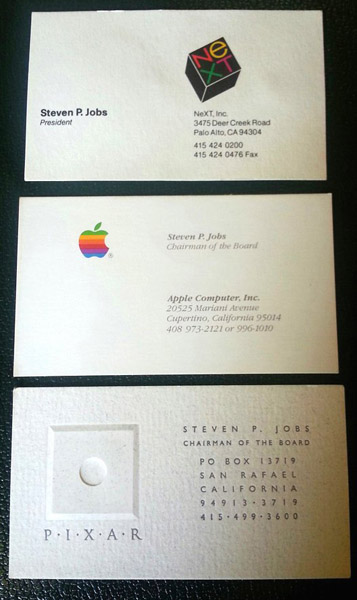 If you like a little Steve Jobs memorabilia and want to contribute to a good cause, the Marin School has three Steve Jobs business cards up for auction, spanning 1984 to 1990, providing one each for NeXT, Apple and Pixar.

Bidding started at $600, and was up to $2,405 at the time of writing. The cards were collected by a family who used to do catering for the former Apple CEO, reports Business Insider.

The Marin School is a private school offering financial assistance to 18% of its students to allow access to students from all socio-economic backgrounds.

The recent biography Becoming Steve Jobs was backed by Apple, in contrast to Walter Isaacson’s earlier biography which was attacked by several Apple execs. Tim Cook, recently named by Fortune as “greatest leader,” spoke extensively about Jobs during an interview with the magazine.