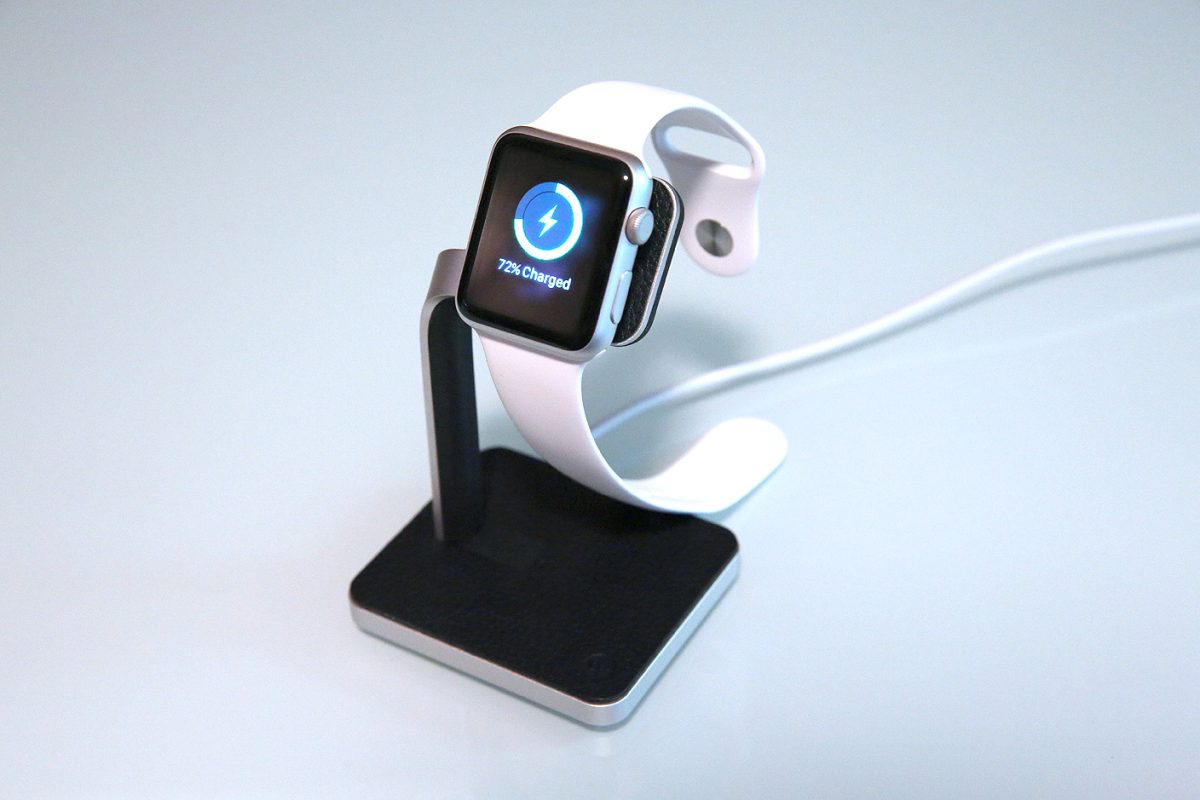 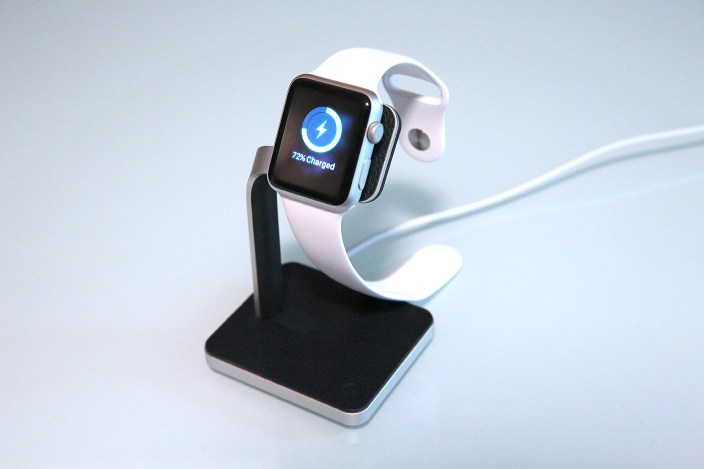 As I noted in yesterday’s review of the Nomad Stand for Apple Watch, I wasn’t initially certain that the Apple Watch needed a dock, but actually using a Watch changed my mind: just as the Apple Watch Edition’s custom charging cases hinted, it’s best to keep metal or metal-accented Watch bands from rubbing against nightstands during charging, and even Apple’s fluoroelastomer Sport Bands tend to flop around when the Watch’s charging puck is connected. My guide to the best Apple Watch stands and docks spotlights many potential solutions, some of which are a lot more compelling than others.

Mophie’s Watch Dock ($60) is completely different in looks from the Nomad Stand, but their identical price points reflect one critical area of overlap: class. Each has the materials and design necessary to look great with everything from Apple’s $1,100 black stainless steel Apple Watch to the entry-level $350 silver aluminum Apple Watch Sport. Unlike the wide Nomad Stand, Watch Dock goes for height, combining black leather with a mostly aluminum stand that has a compact footprint. Thanks to its clean lines and manageable size, Watch Dock could easily become the retail Apple Watch display stand of choice when more watch and jewelry stores start selling Apple timepieces… 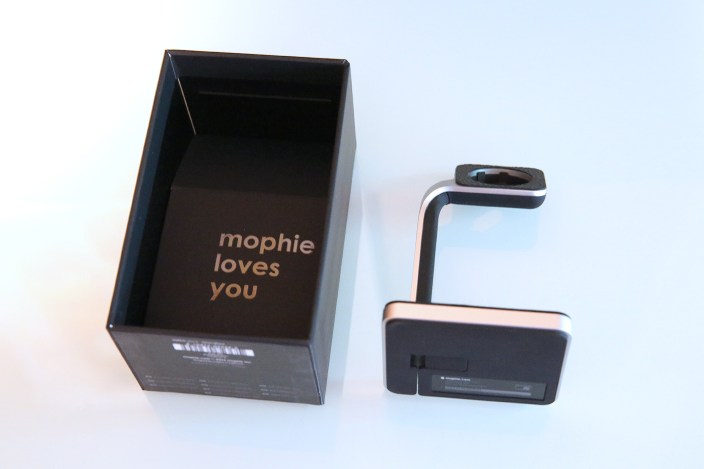 Watch Dock arrives in a nice matte black box that opens to reveal a familiar phrase — “Mophie Loves You” — in glossy black text. While it’s somewhat lighter than one might expect, Watch Dock’s gunmetal-colored aluminum looks great, thanks to a jewelry-like sheen that recalls the iPhone 4’s stainless steel frame. Mophie has mixed leather and rubber deftly enough that you probably won’t care which is which, but grainy leather pads are found on the top of the 2.85″ by 2.5″ base, and the front of the 1.6″ by 1.35″ Apple Watch holder. Smooth black rubber is used on the back of the holder, the bottom of the base, and the inner edge of the metal bar that connects them. If you’re concerned about scratching your Watch on Watch Dock, Mophie’s done pretty much everything to make that impossible. 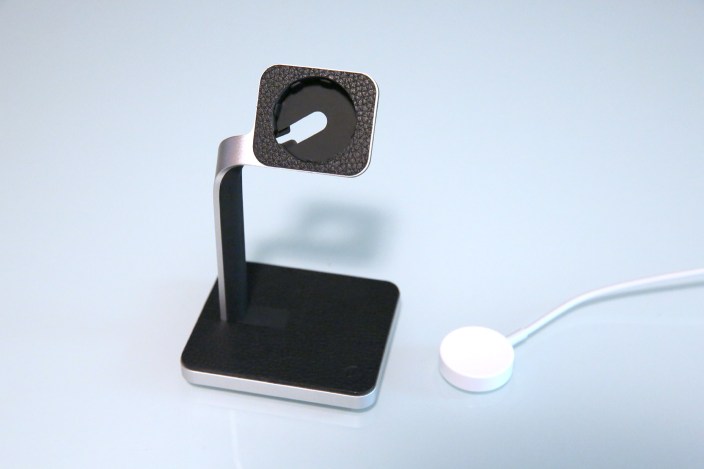 To assemble the Watch Dock, you remove a small rubber peg from the base, then feed the USB plug of Apple’s Magnetic Charging Cable through the top hole, into the rubber channel on the left side, and finally through the base. You replace the peg, sealing the hole in the otherwise leather base topper, while the remaining cabling runs out from the dock’s back. Like the left side of the stand, the base has a rubber channel that keeps Apple’s cable properly managed. 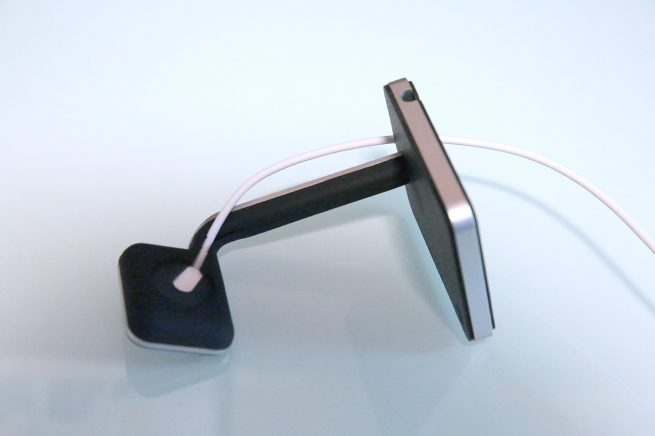 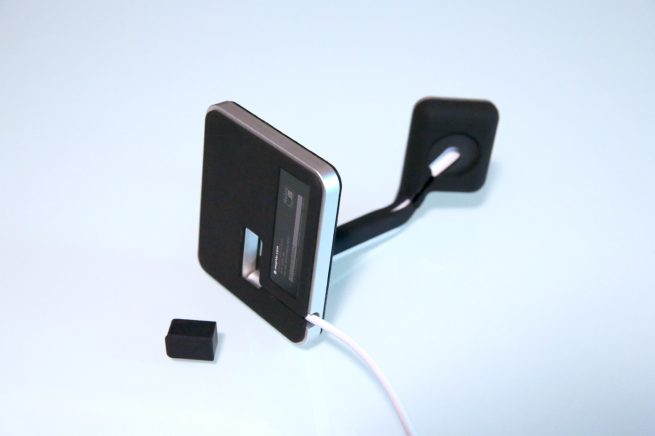 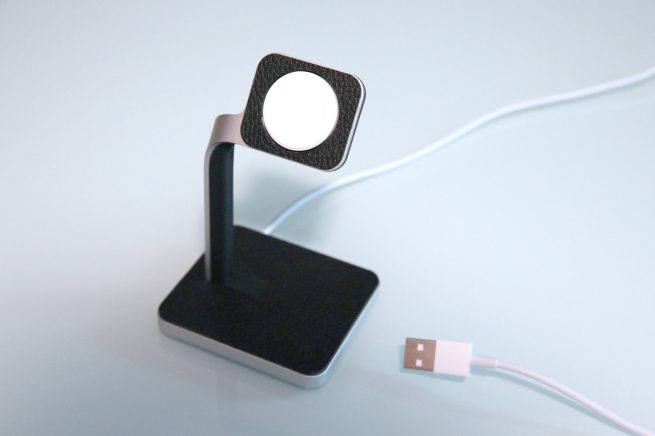 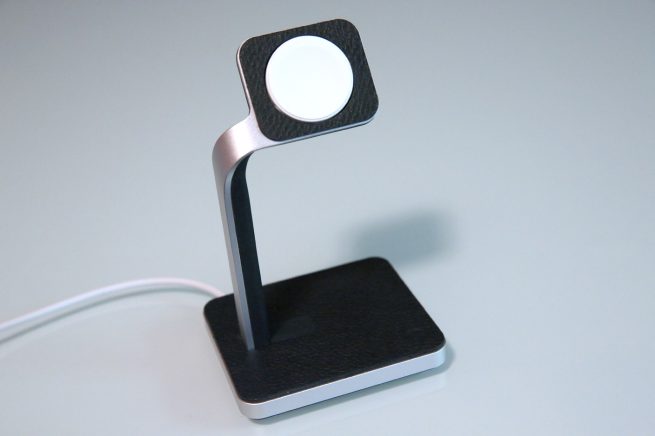 Completely assembled, the Watch Dock has an almost Dieter Rams-like design sensibility, interrupted only by Apple’s white charging surface on the top. Deliberately tilted on a roughly 30-degree angle, the Apple Watch holder has the curved metal appeal of the Nomad Stand, but in a more muted form that’s closer to “modern” than “futuristic.” It’s almost magical to see the magnetic puck holding your Watch 3.5″ in the air without a support underneath; the height gives loose Apple Watch wristbands an ample chance to stretch out, while loop and link bands can hover in the air. 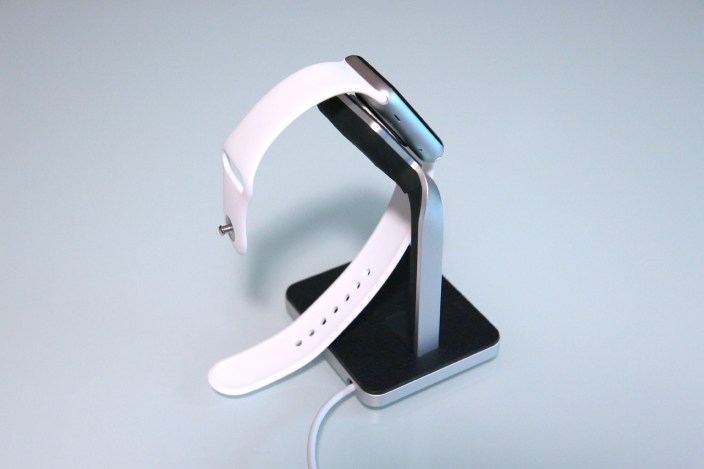 Although your personal design sensibilities will guide you to the “right” choice between Mophie’s Watch Dock, Nomad’s Stand for Apple Watch, or other alternatives, Mophie’s and Nomad’s options both strike me as particularly strong options. The smaller Watch Dock may be a better pick if your nightstand or desk space is at a premium, or if you care about nearly an inch of extra Apple Watch elevation, while the larger Nomad Stand sprawls out to the sides and feels decidedly heavier. Mophie currently offers a single color scheme that’s halfway between Apple’s bright silver and space gray/space black options, while Nomad has separate colors without leather accents. Unless a low price is critically important to you, in which case there are cheaper but also cheaper-looking options, it would be hard to go wrong with either of these nicely-designed choices.