The USB-C port first introduced by Apple in the new 12-inch MacBook looks likely to be used across the MacBook range as Intel has adopted the standard for Thunderbolt 3.

Thunderbolt was developed to simultaneously support the fastest data and most video bandwidth available on a single cable, while also supplying power. Then recently the USB group introduced the USB-C connector, which is small, reversible, fast, supplies power, and allows other I/O in addition to USB to run on it, maximizing its potential. So in the biggest advancement since its inception, Thunderbolt 3 brings Thunderbolt to USB-C at 40Gbps, fulfilling its promise, creating one compact port that does it all.

Apple was an early adopter of the Thunderbolt standard, which allowed a single port to be used for both high-speed data transfer and DisplayPort monitor connections. Intel’s integration of the two standards would allow Apple to replace the Thunderbolt port in the MacBook Pro range while still maintaining full compatibility with existing peripherals …

Thunderbolt 3 doubles the speed of Thunderbolt 2 to 40Gbps, allowing high-speed transfer of large files, as well as support for high-resolution external monitors. Intel notes that the standard supports the simultaneous use of two 4K monitors at 60Hz. 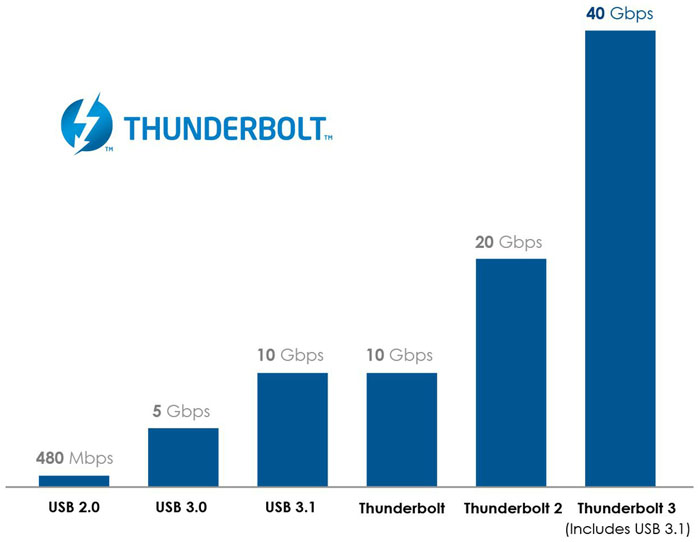 An adapter will maintain compatibility with existing Thunderbolt 2 devices. Intel says that the first Thunderbolt 3 devices will begin shipping “before the end of the year.”

While the development strengthens the case for USB-C, it’s unlikely that Apple would adopt the radical single-port approach for MacBook Pro machines, where it’s common for professional users to connect multiple devices simultaneously. We’re most likely to see the existing Thunderbolt port replaced with one or two USB-C ports with Thunderbolt capability.