Apple ranks in at number 5 on latest Fortune 500 list 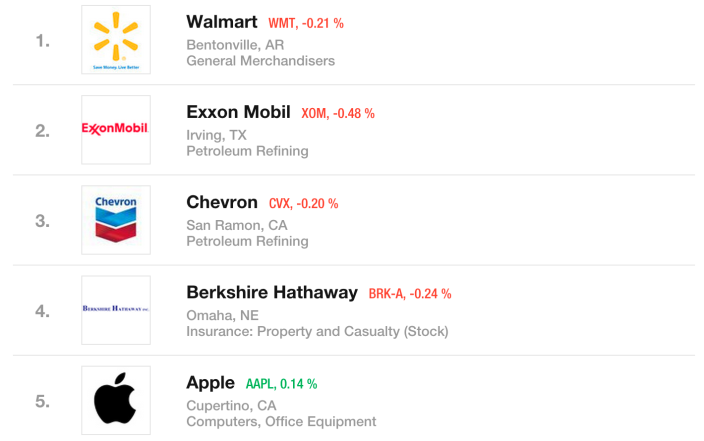 Apple ranks in at number 5 on the latest Fortune 500, the annual list that ranks US companies by revenue, this time for fiscal year 2014. The company maintains its same position as last year behind Berkshire Hathaway (no. 4), Chevron (no. 3), Exxon Mobil (no. 2), and Wal-Mart Stores (no. 1).

While Apple comes in at fifth place for revenue, Fortune notes that it “boasts both the biggest profits of any company on the list ($39.5 billion) and the highest market value (more than $700 billion).”

After a bumpy start to 2014, Apple’s stock finished the year up 40%, adding nearly $200 billion to the company’s market value. A product pipeline that’s gotten Apple fanboys lining up all over again has certainly helped reenergize revenue growth: In addition to unveiling new categories like Apple Pay and Apple Watch, the company launched the iPhone 6, selling a record-breaking 10 million units in the first three days. As CEO Tim Cook recently told investors: “It’s tough to find something in the numbers not to like.” The normally low-profile Cook is breaking new ground in other ways too—in October, 2014 he came out as the first openly gay CEO of a Fortune 500 company.