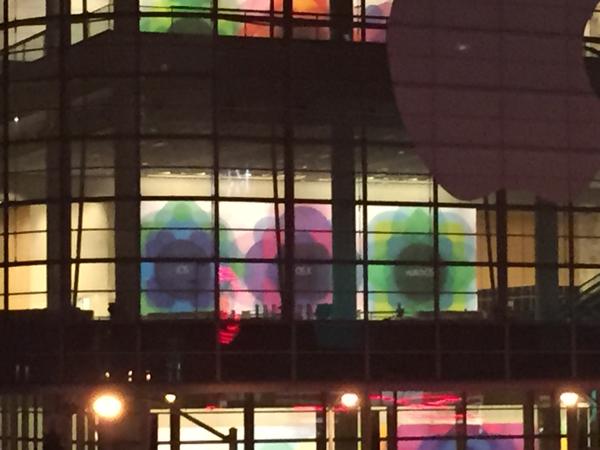 MacStories’ Federico Viticci has posted an interesting image of WWDC banners from the second-floor of Moscone West, the WWDC event venue.

These images show Apple highlighting its three platforms: iOS, OS X and watchOS. These banners do not follow the same pattern as previous years with dramatic photography in rectangular banners. These are more like full-height wall posters with simpler geometric logos. Each image has the name of Apple’s OS written in a light font-face (the image is not clear enough to see whether this is Sans Francisco) on a simple background of multicoloured translucent shapes.

What’s particularly striking about this photo is that it confirms a rebranding of Apple’s smartwatch operating system. On Apple’s current public marketing, the Apple Watch is described as running ‘Watch OS’. By these banners, it can be seen that the new name for this platform is actually ‘watchOS’. The updated WWDC app also includes this way of writing the platform in its Filter view, but I had assumed that this was a mistake as it was not supported by any other Apple marketing. With these banners spotted at WWDC, it seems that this was not actually a mistake and shows a bit of a rebrand for Apple’s smartwatch operating system.

Wait. Is this really how it is written – 'watchOS'? pic.twitter.com/AFNWlmtWmX

watchOS looks quite odd initially although makes some sense if you consider taking iOS and replacing the prefix ‘i’ with the word ‘watch’. It is also quite amusing that Apple is branding watchOS as a separate platform, when it really is more of a layer on top of an iOS base. Note that the banners also confirm that Apple’s desktop operating system will continue to be called OS X, as some people had speculated it was time to drop the X nomenclature.

This lines up with Apple’s pre-announcement that the event will feature a native Apple Watch SDK, giving developers more functionality (with access to sensor data, the Digital Crown and other parts of the hardware stack) as well as better performance than the current WatchKit app extension system.

Moving further on to the speculative front, it’s interesting to note that whilst OS X is depicted on a rounded rectangle shape both the iOS and watchOS text is superimposed onto a circle. Meanwhile, the superellipse shape which is iconically connected to the iOS App Store is used for the OS X banner.  For the Watch, this makes sense as app icons on that device are masked into circles. For iOS, it is less clear as the app icons have always been traditionally rounded-rectangles and we don’t expect major design changes on this front to be a part of iOS 9.

Catch all our WWDC coverage live from June 8th at 10 AM PST. On Friday, we posted a roundup of everything to expect from Apple’s flagship event: the next-generation software platforms as well as an unveiling of Apple Music, the streaming music service. Apple will also be streaming the event live from its website.