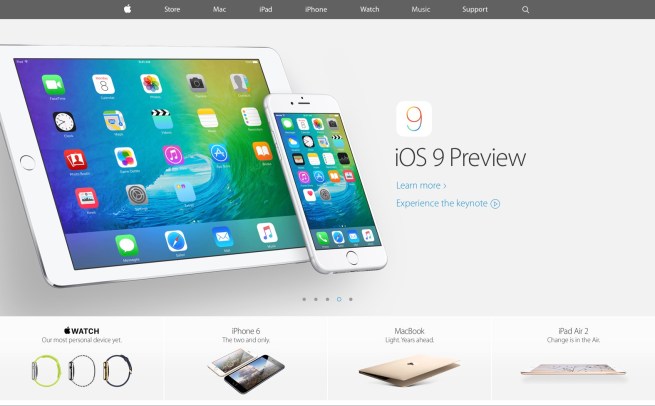 The iPod, which has had its own tab on the Apple.com web site’s homepage for over 13 years, today disappeared from Apple’s homepage and menu bar  — replaced with and subordinated under a new Music button. iPod sales have been slipping for years, the result of both steadily increasing demand for iPhones and reduced support from Apple, which has left previously-introduced iPod hardware untouched and undermarketed. iPod shuffle, iPod nano, and iPod touch models remain available from Apple (and discounted elsewhere), but their de-emphasis suggests that Apple isn’t particularly concerned with promoting them to customers.

Music, a button primarily dedicated to the upcoming Apple Music service based on Beats Music, includes a small iPod section near the bottom of its tall, scrolling page. Clicking on the “Learn more about iPod” link takes you to the Apple.com/ipod section of the web site, notably including — for now — a link to the similarly under-the-radar Apple TV, which was reportedly slated to receive an update at WWDC up until the last minute.