Apple announces Walk the Moon will perform at WWDC Bash 2015 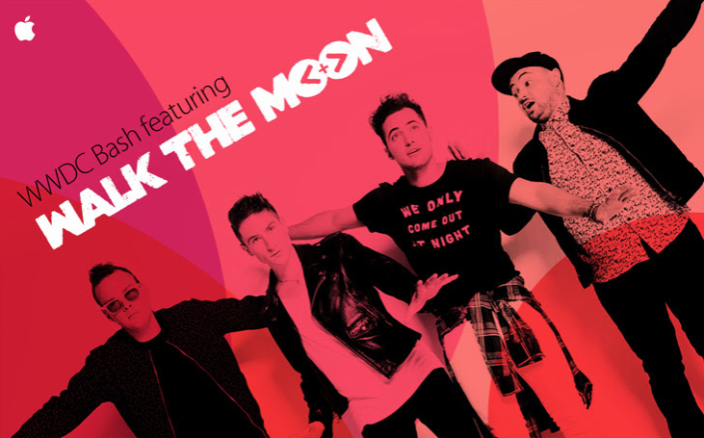 Apple today has announced that popular pop band Walk The Moon will perform at the annual WWDC Bash on Thursday, June 11th. The 2015 WWDC Bash is set to take place at 6PM at the Yerba Buena Gardens and is open to all WWDC attendees 18 years or older.

In 2014, Bastille performed at the WWDC Bash. Vampire Weekend headlined the event in 2013, while Neon Trees performed in 2013.

On stage during the keynote on Monday, Apple played Walk The Moon’s breakthrough single Shut Up and Dance while showing off Apple Music. The band tweeted their appreciation for Apple’s support following the event.

The WWDC Bash is intended to allow developers to take a break from the long week of sessions and coding. Apple invites everyone to “program yourself to party.” Apple is offering WWDC attendees two free songs from Walk The Moon to prepare for the event, as well.

Program yourself to party. Come watch WALK THE MOON perform Thursday night at the WWDC Bash. The party starts at 6:00 p.m. at Yerba Buena Gardens.

Check out Walk The Moon’s breakout single Shut Up and Dance below.

Huge thanks to @AppleMusic for showing us some love yesterday for the #WWDC15. Congrats on the big launch, yall!