Following on from the Apple Watch native apps hack, Steve Troughton Smith has also found that the keyboard view in iOS 9 has much better adaptability support on Apple’s latest operating system. As shown by the screenshots, at larger resolutions, the iPad keyboard rearranges itself to make use of the space. Tab and Caps Lock keys are notably added onto to the left side as well as an entirely new top row of symbols.

This new row reflects the symbols normally found on hardware keyboards above the number keys: @ # $ % ^ & * ( ) _ +. Next to the ‘p’ on the first row, the keyboard also gains curly braces and a pipe symbol.

The alternate second page of keys has also changed in this new layout. The toolbar row of symbols is replaced by the numbers. These symbols appear larger in the first full-size keycap row, again along with some new additions compared to current iPads. The larger layout means that Apple can eliminate the ‘third page’ of symbols (usually activated by pressing the #+= key) as all the keys can now fit on just two pages.

The reason behind this design effort seems obvious. A larger 12-inch iPad Pro has been rumored for a while and it seems that this will be how the keyboard is presented on this new (although currently unannounced) device. The large iPad is expected to be unveiled by Apple in the fall, targeted at education and business. The new iOS 9 Split-Screen features will also work especially well on a 12-inch screen canvas.

For comparison, this is how the keyboards currently look on the iPad Air running iOS 9. 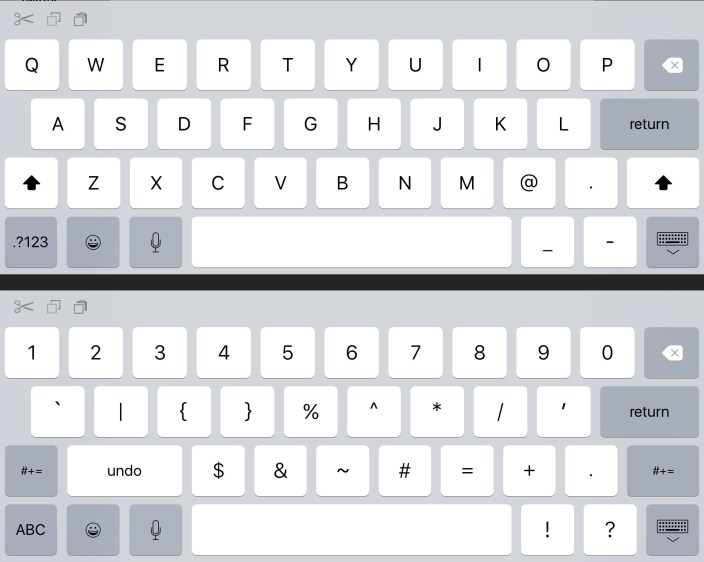 Update: Code around the larger keyboard also suggests the bigger iPad will carry a 1366×1024 resolution screen. The new dimensions at 12.9″ amount to the iPad Air’s 263ppi: