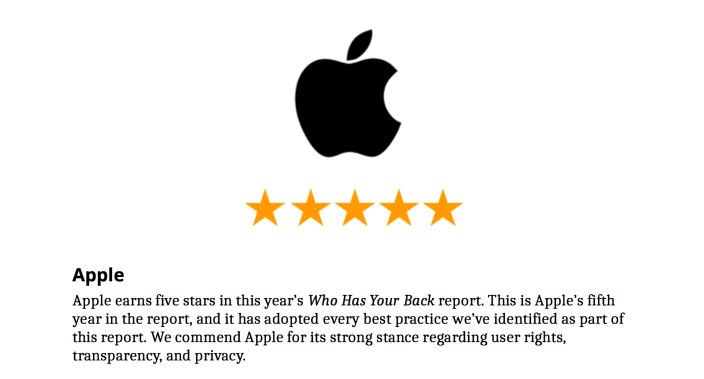 The Electronic Frontier Foundation has today published its rankings of technology companies regarding how they handle user data. Apple this year has received praise from the EFF for how transparent it is when it comes to handling requests form government agencies and standing up for user rights and privacy.

On the EFF’s ranking scale, Apple received five out of five stars, as did Dropbox. Google, however, received three stars out of five, while Facebook received four stars. For its ranking to increase, the EFF says that Google needs to be better about informing users about requests for their data and needs to provide more transparency into its data retention policies. Other companies that earned five stars are Adobe, CREDO, Sonic, Wickr, Wikimedia, WordPress.com, and Yahoo. AT&T earned just one out of five stars, while Verizon earned two.

Regarding Apple, the EFF had the following to say:

This is Apple’s fifth year in the report, and it has adopted every best practice we’ve identified as part of this report. We commend Apple for its strong stance regarding user rights, transparency, and privacy.

Last year, Apple also received five out of five stars, while for the three years before that, it received just one.

Apple and Tim Cook have been vocal about their support for user privacy and security. Earlier this year, Cook gave a speech regarding cybersecurity during an award reception. Apple launched a new security page on its website last year as well, which was accompanied by an open-letter from Cook regarding Apple’s policies. The Apple CEO also spoke about cybersecurity at the White House Summit earlier this year, as well as during a German interview.