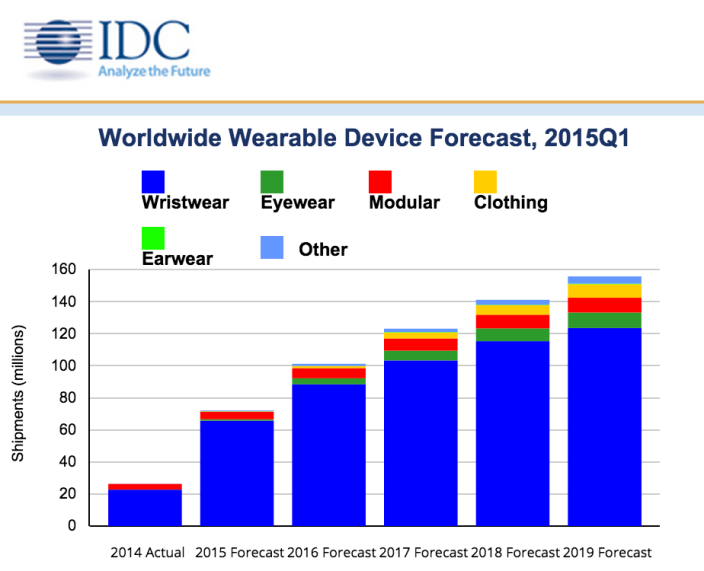 Following the launch of the Apple Watch in April, IDC’s latest estimates for wearables shows the market is set to grow approximately 173% this year as shipments increase from 26.4 million in 2014 to an estimated 72.1 million worldwide for 2015.

While IDC doesn’t break down the estimate by device, and we don’t know official numbers yet from Apple for Watch sales, it does say it’s expecting that “smart wearables, those capable of running third party apps, to take the lead in 2016.” By 2019 it estimates the market will more than double with an estimate of 155.7 million total units made up of 66.3 million basic and 89.4 million smart wearables.

“Smart wearables like the Apple Watch and Micosoft’s Hololens are indicative of an upcoming change in computing, and the transition from basic to smart wearables opens up a slew of opportunities for vendors, app developers, and accessory makers…Android Wear, Tizen, and WatchOS are moving ahead with improved user interfaces, user experiences, and applications. These will raise the expectations of what a smart wearable can do, and each platform is vying for best-in-class status. We’re not there yet, but we’re seeing the building blocks of what is to come.”

Apple hasn’t revealed Apple Watch sales yet, and we might not ever get a specific breakdown outside of the iOS device category as a whole, but there are some estimates from others. The latest came just today courtesy of data complied by Slice Intelligence, estimating the Apple Watch has sold close to 3 million units in the U.S. alone. That number doesn’t include any sales in the other markets where the Apple Watch is currently on sale including the United Kingdom, Australia, Canada, China, France, Germany, or Japan. And the latest from KGI Research puts total shipments worldwide at around 5-6 million so far with an estimate of just under 15 million units for the year.