The Logic Pros: Moog Sub 37 is one of the best hardware synths for the money 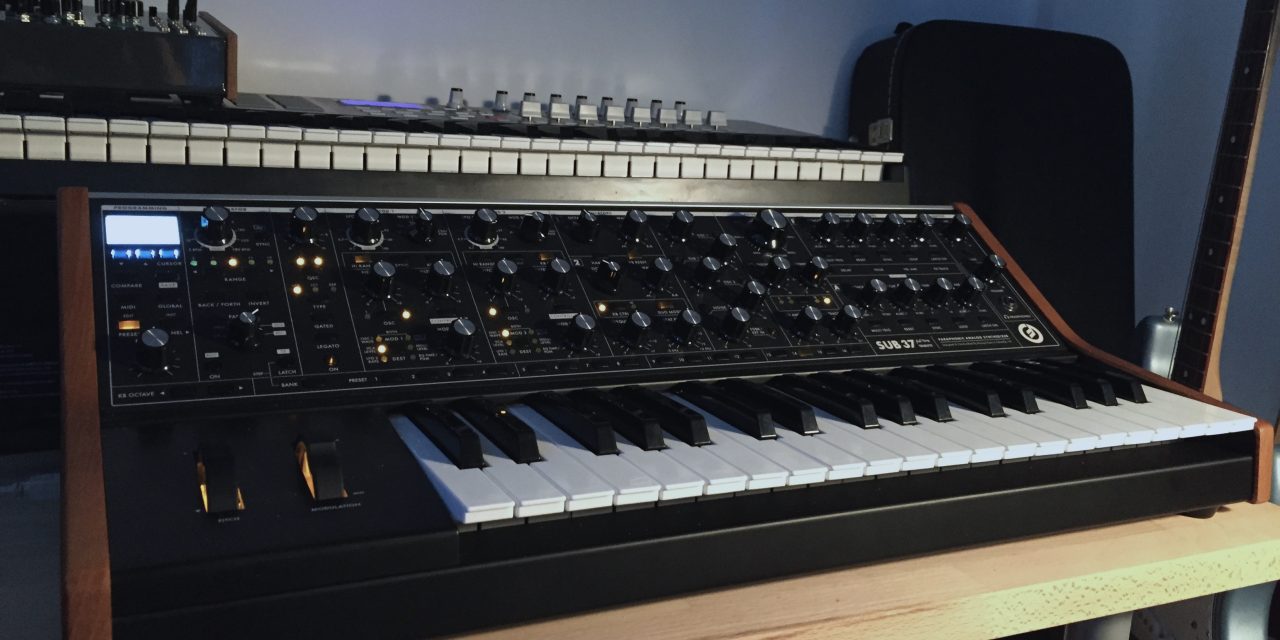 In this week’s episode of The Logic Pros, we are taking a look at the Moog Sub 37. Another analog instrument from legendary synth powerhouse Moog, the Sub 37 takes it up a notch offering a much deeper feature set and refined workflow compared to its baby brother, Sub Phatty.

In last week’s review we found that Sub Phatty was a more than capable instrument that brings Moog’s world famous sound at an, all things considered, affordable price tag. While the Sub 37 will certainly be reaching into your pockets a little deeper, it comes with just about everything the Sub Phatty has to offer, and then some. I might even make the argument that in some ways, for the price, it outshines Moog’s $3,000 – $5,000 Minimoog Voyagers: 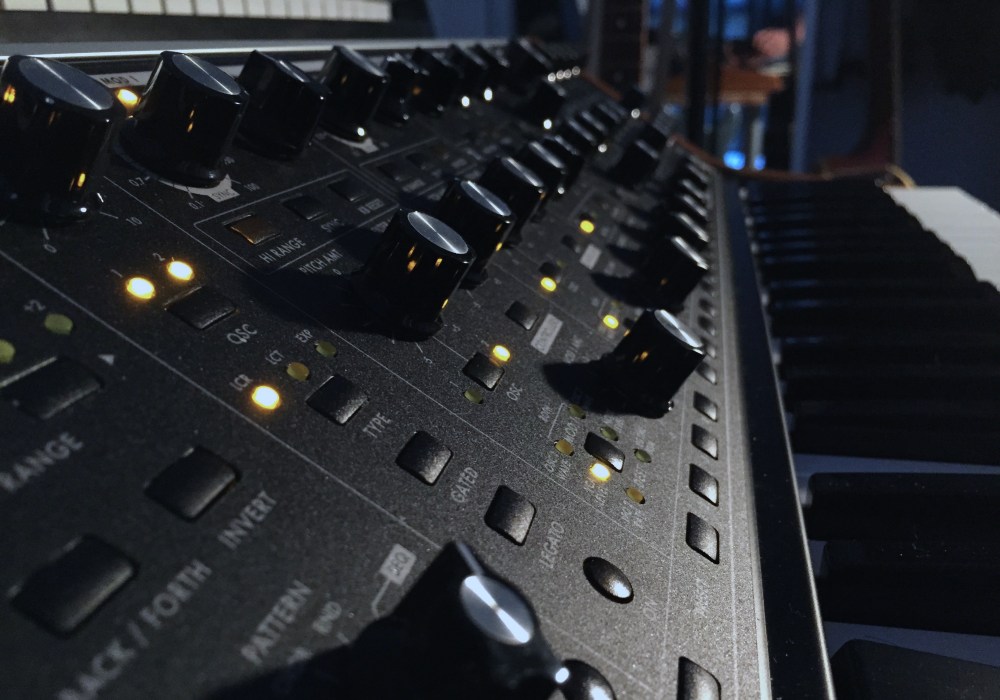 Once again, this is a serious piece of machinery straight from the Asheville, North Carolina factory. There is absolutely nothing cheap about it. Every knob, switch and button is made with impeccable quality. The Sub 37 is not only one of the best made instruments I have ever played, but it’s also one of the nicest looking synthesizers out there in my opinion.

This time around we are getting a 3 octave, 37-key keyboard with aftertouch for additional expression/modulation possibilities (no aftertouch on Sub Phatty). Moog certainly didn’t spare any expenses on the keys themselves either, as this is a great feeling keyboard all around. You’ll also find a couple orange backlit wheels for pitch and modulation, a headphone out, a handy master mute button and the typical I/O options: audio in/out, pitch/filter/volume/gate CVs , plus din and USB MIDI. Much like the Phatty, Sub 37 is friends with your Mac, easily communicating with Logic, Pro Tools and other DAWs (more on this below). 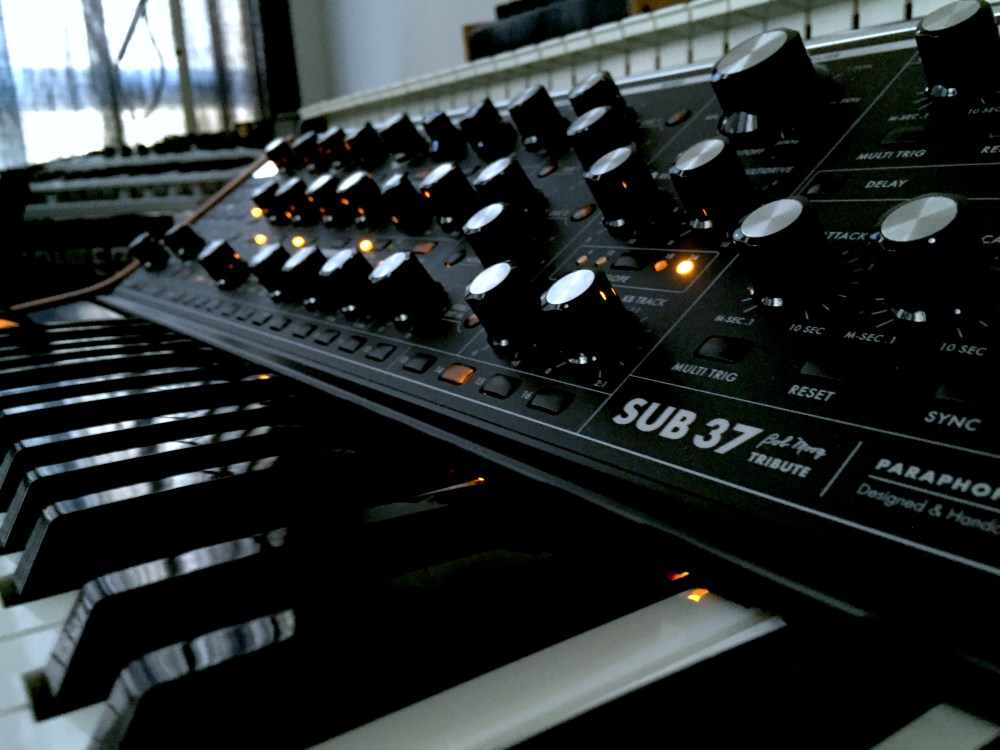 As the name suggests, Duo mode allows us to play two notes at once. Seemingly more and more popular with mono synth makers, this is actually a paraphonic synthesizer. Ok so you aren’t going to be making big lush chord progressions like with a true poly synth, but I found the dual voice paraphonic option to be quite amazing and that it opened up the instrument’s possibilities significantly. In many cases I found myself making tweaks to sounds specifically pertaining to the way the two notes interacted with one another.

This idea, in combination with the looping envelopes, Mutli-Drive and Feedback loop, can be a dangerous combination. It allows the Sub 37 to go from a typical, solid sounding Moog, to a nasty over-the-top and even experimental beast. Here is a track we put together to show off the Sub 37’s filter along with the aforementioned Duo mode and drive possibilities. You’ll hear some Sub Phatty in there along with a ton of parameter automation via Logic on the Sub 37:

The arpeggiator or sequencer is generally fairly basic and much of what you would expect, outside of the fact that they are built-in to a Moog! Most $3,000+ Voyagers don’t even have this capability, adding a ton of value to the already much lighter price tag. This is a 64-step sequencer, and it will allow you to drop two note events on each step with Duo mode, once again expanding the synth’s sonic possibilities. Both the arpeggiator and the sequencer will sync with MIDI clock and provide all the usual options altering your patterns: back/forth, invert, up, down, order, etc.

You get two fully fleshed out modulation busses, both with a multi-wave LFO and two pre-wired modulation destinations for pitch and the filter. Along the bottom there is a small destination matrix that allows you to choose where the third pre-wired amount knob sends. There are 7 preset destination options in the matrix, but we can set it to PGM, and then choose from the massive list of routing possibilities using the instruments built-in LCD display. All three knobs are bi-polar with a sweet little center dent, which is something I missed a little bit on the Sub Phatty.

While I found the Sub Phatty to be well worth its weight in gold, its alien hieroglyphics laden enigma machine of a preset/function button section was some what tedious. Knob-per-function is in full effect here. Where as with the Sub Phatty there was some sound shaping functions hidden a layer back, outside of global parameter settings and a few advanced options, Sub 37 has just about everything laid out on the front panel, and its glorious. When it comes to oscillator/LFO resets, the filter slope and envelope loops, I do not want to have to crack a code to get at them, and on Sub 37 you don’t have to: 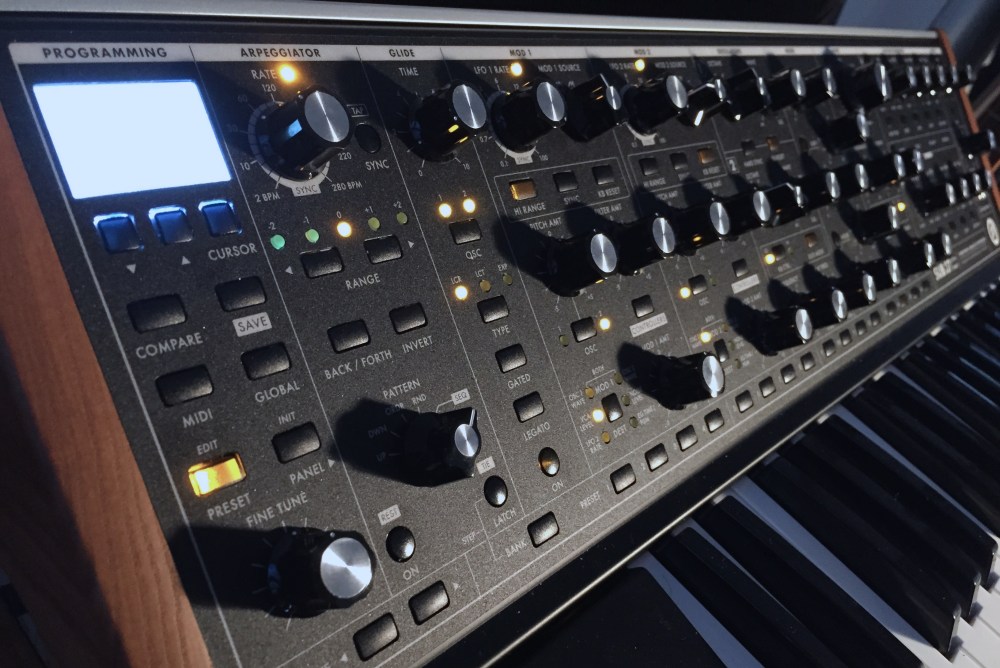 This beast of a synth talks with your Mac no problem. Just like the Sub Phatty we can send/receive MIDI performances to Logic (or any other DAW). Whether it be complex edits and automation style programming inside of our DAWs, or live performance style moves directly on the front panel, everything from the filter and envelope controls, to the modulation bus options and more can easily be recorded into Logic. Be sure to check out our episode on connecting external instruments/synths to Logic on how to hook this thing up in seconds.

One noticeable omission here is the lack of a Sub 37 software editor. It seems as though it is still on its way, but it’s been quite a while so don’t get your hopes up. While it would be nice to have a preset manager, it is not nearly as important as it is with Sub Phatty and its hidden controls. We get 16 banks of 16 presets easily accessible to us along the bottom of the panel just above the keys, allowing us to recall patches on the fly during performances. Ok so I want a Sub 37 editor, and will download it the second it comes available. However, with 256 presets storable right on the machine and a front panel as fully featured as Sub 37’s is, I don’t really need/want an editor. 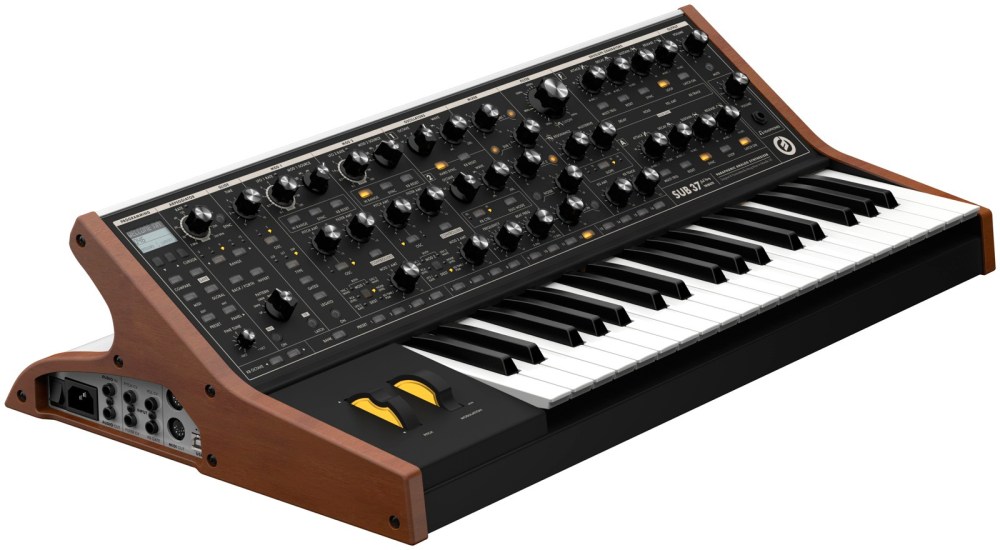 Wow, this thing is great. The simple to use modulation busses, incredible Muti-Drive circuit distortion, Feedback loop, built-in sequencer/arp, dual loopable envelopes, and the way we can drive the filter with the mixer are all major highlights here. For me personally, the 1-pole 6db filter slope is a game changer. While in some ways the differences between the 12, 18 and 24db slopes can be subtle to the untrained ear, this somewhat rare 6db option is extremely characteristic. It allows the filter on both the Sub Phatty and the Sub 37 to stand out from just about anything else I’ve ever used in the hardware space.

I’d also like to point out that this thing can get pretty crazy in general. It can go from an amazing sounding workhorse that can do all the usual sounds better than most, to an over-the-top, borderline modular sounding synth with just a few button presses. That’s rare with big name, keyboard based synths, and I love it.

Update (8/24 3:30pm):  My mistake here, you can actually can get some cross modulation going and there is a Sine wave LFO option found within the Mod PGM Sources. Likely a testament to how fully- featured this thing really is. Nonetheless, I would still have wanted a separate front panel cross mod option.

If I had to pull a few negatives out (and it isn’t easy), I’d like to have seen some simple cross modulation features that allow us to use the oscillators themselves as modulation sources. Another would be, and I know this is going to sound ridiculous to the OG Moog/synth guys out there, I want Sine waves on the LFO and a white noise option. Lastly, an editor would be nice, especially for sharing presets with bandmates, friends and other musicians.

In the end, I really don’t have anything bad to say about this thing. It’s fantastic. I’d like to be able to say it’s $1,499 price tag is too expensive, but in my opinion it isn’t, at all. We are still in the “Tribute Edition” phase, so it may very well come down in the future without the wood ends or something. With such a quality build, an impressive feature set (even for a Moog) and the Asheville factory’s attention to detail, it is something that can be passed down for generations. While I would like to give a special shout out to the DSI Pro 2 at an extra $500, I’d say the Sub 37 is the world’s best mono/paraphonic synth for the money that works with your Mac. You’re going to have to pry mine from my cold dead hands.

You can see our full break down of the Moog Sub Phatty in last week’s episode.