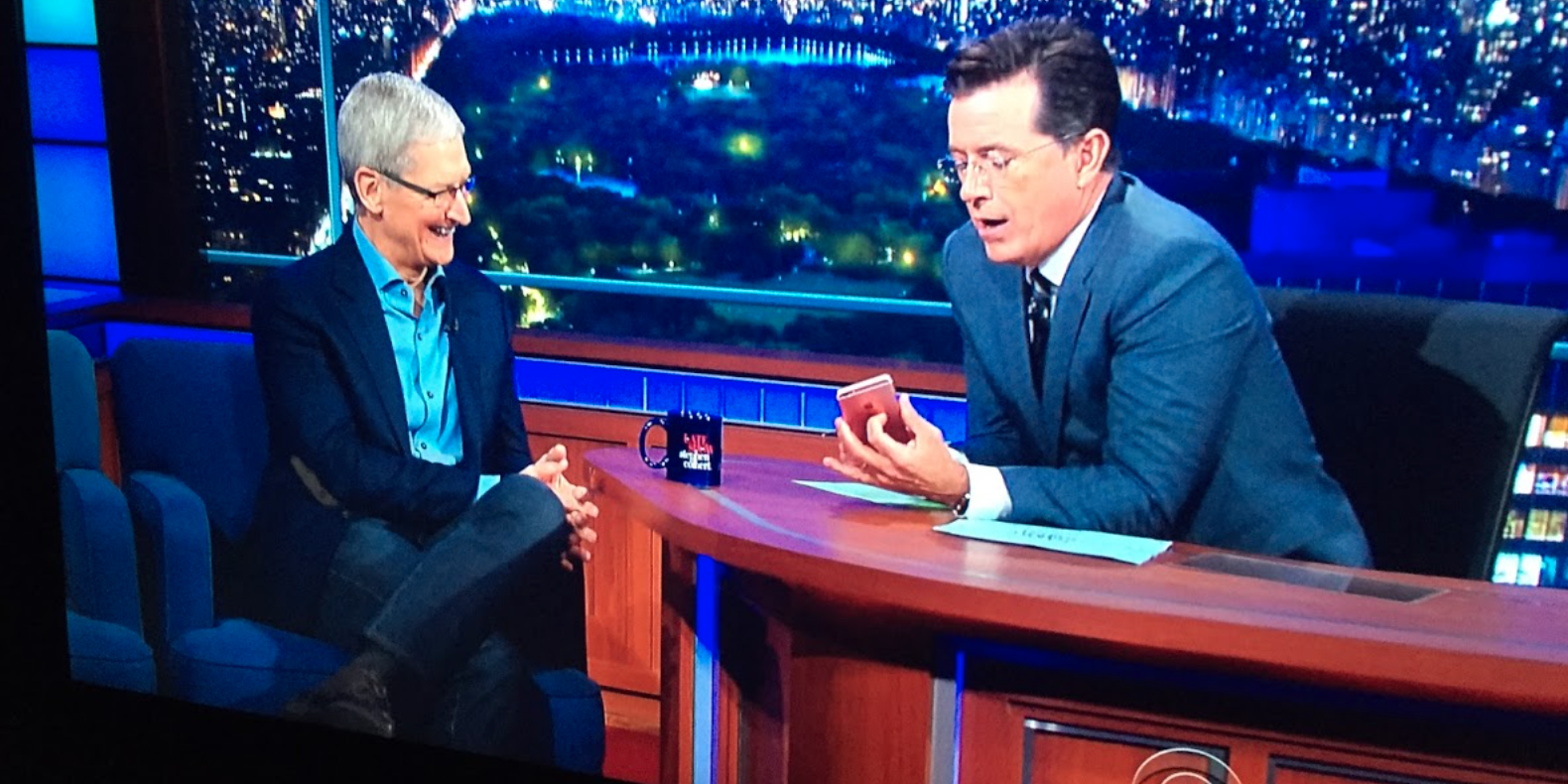 As expected, Apple CEO Tim Cook appeared on Late Show with Stephen Colbert tonight following his surprise appearance at the Fifth Avenue Apple Store yesterday. During the 10-minute discussion on the show, Cook and Colbert touched on a variety of topics, including the new iPhone 6s, Steve Jobs, Cook’s personal life, and Apple’s charitable efforts.

First off, Cook and Colbert discussed the announcement of Apple’s new iPhone 6s. Colbert had a Rose Gold iPhone 6s that he was showing off, joking that he was not going to give it back to Apple. Colbert asked Cook about 3D Touch and Live Photos, two of the flagship features of the new device, and was impressed with both.

Colbert then explained that while he was interviewing Uber CEO Travis Kalanick last week, Kalanick stated that Apple had already started work on a self-driving car. Cook, of course, danced around this question. “We look at a number of things along the way and we decide to put our energy into a few of them,” Cook said on the show.

Colbert then shifted the subjected to Steve Jobs, the Apple CEO for whom Cook took over. Cook, of course, praised Jobs dearly and said that he loves him and misses him every day. Colbert then brought up the handful of movies that have been made regarding Jobs’s life and portray him in a less-than-positive fashion. Cook noted that, while he hasn’t seen any of them, he isn’t a fan of the “opportunistic” nature of society today.

“I haven’t seen them, but the Steve I knew was an amazing human being. He’s someone that you wanted to do your best work for He invented things that I think other people could not. He solved things other people could not. He had this uncanny ability to see around the corner and to describe to the future. He was a joy to work with and I love him and I miss him every day. I think a lot of people are trying to be opportunistic and I hate this. It’s not a great part of our world.”

Following the discussion on Steve Jobs, Colbert asked Cook about how he has made Apple more charitable and involved in social issues since he became CEO. Specifically, Colbert mentioned Cook’s decision to come out as gay last year. Regarding that decision, Cook explained that he needed to do something to help the kids and adults being bullied and made fun of for their sexuality.

“While I value my privacy significantly, I figured I was valuing it too far above what I could do for other people, so I wanted to tell people my truth. Many people already knew, so it was no revelation. But it was maybe for the broader world. And I felt the tremendous responsibility to do it.”

Cook also explained, yet again, that Apple’s main goal is to leave the world better than they found it. The Apple executive noted that is why the company focuses so heavily on ensuring it is protecting the rights of its employees, the environment, and its supply chain.

Colbert wrapped the interview by explaining that he worked with Apple to have Siri prepare a few questions for Tim Cook. “Siri, what should I ask Tim Cook?,” Colbert spoke into his iPhone. On the show, Siri responded with, “Do me a favor. Ask him when I’m going to get a raise.” Asking Siri what you should ask Tim Cook really does bring up a variety of responses, some of which can be seen below.

A full video of Cook’s interview can also be seen below.