According to Google’s latest data, Lollipop is running on just about 21% of devices. 2013’s KitKat still has 40% share of the ecosystem, while Android Jelly Bean also holds a very large stake of the market — combining the three minor revisions of Jelly Bean makes up more than 30%. The much-older Ice Cream Sandwich, Gingerbread, and Froyo, even, still total almost 10% combined. 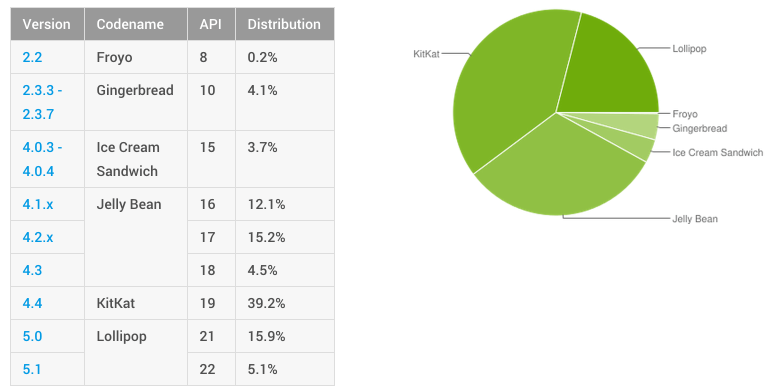 Ecosystem fragmentation has been an ongoing discussion, and it’s one area that Apple very clearly has the advantage. While Google is still struggling to push users to last year’s OS (and planning to introduce another update, Marshmallow, in just a few weeks), Apple has — thanks to its control of the entire ecosystem — managed to update users at a relatively astounding pace. In fact, more than 70% of 9to5Mac readers have updated to iOS 9, although the audience leans heavily toward tech savvy compared to the average iOS device user.