In this week’s episode of The Logic Pros, after looking at some high quality hardware over the past few weeks or so, we are going back to basics with busses, aux tracks, sends and more. While Apple has made it about as easy as we can imagine for new users jumping into Logic for the first time, from Garageband or otherwise, a general understanding of these features can make a huge difference in the quality of a composition. The basic but powerful features allow creators to get a lot more mileage out of their DAWs, while providing features commonly used by professional producers/engineers on a daily basis:

A Bus is essentially a digital pathway that allows us to route audio to various places within Logic. Two of the most common uses for Busses are for FX Sends and grouping tracks together to what are generally referred to as Submix or Submaster tracks. Logic Pro X is very user friendly when it comes to busses. In most cases, it will intelligently create appropriate auxiliary track(s) with corresponding busses setup on everything from complex Track Stacks, multi-channel Drummer instruments and, as mentioned above, on much more common moves like setting up Sends for FX processing and Submix (or Submaster) tracks.

It is a common technique to group individual tracks, like say your drum or vocal tracks, using Busses and Auxiliary tracks. This allows us to both organize the audio signal of these groups of tracks onto a single fader on the mixer in LPX and apply FX (more on this below) to entire group of tracks, which is another very common technique use by professionals every day. Applying compression can provide a more cohesive (or “glued” together sound), while Submix EQ can help to balance the overall frequency spectrum of various groups of instruments. 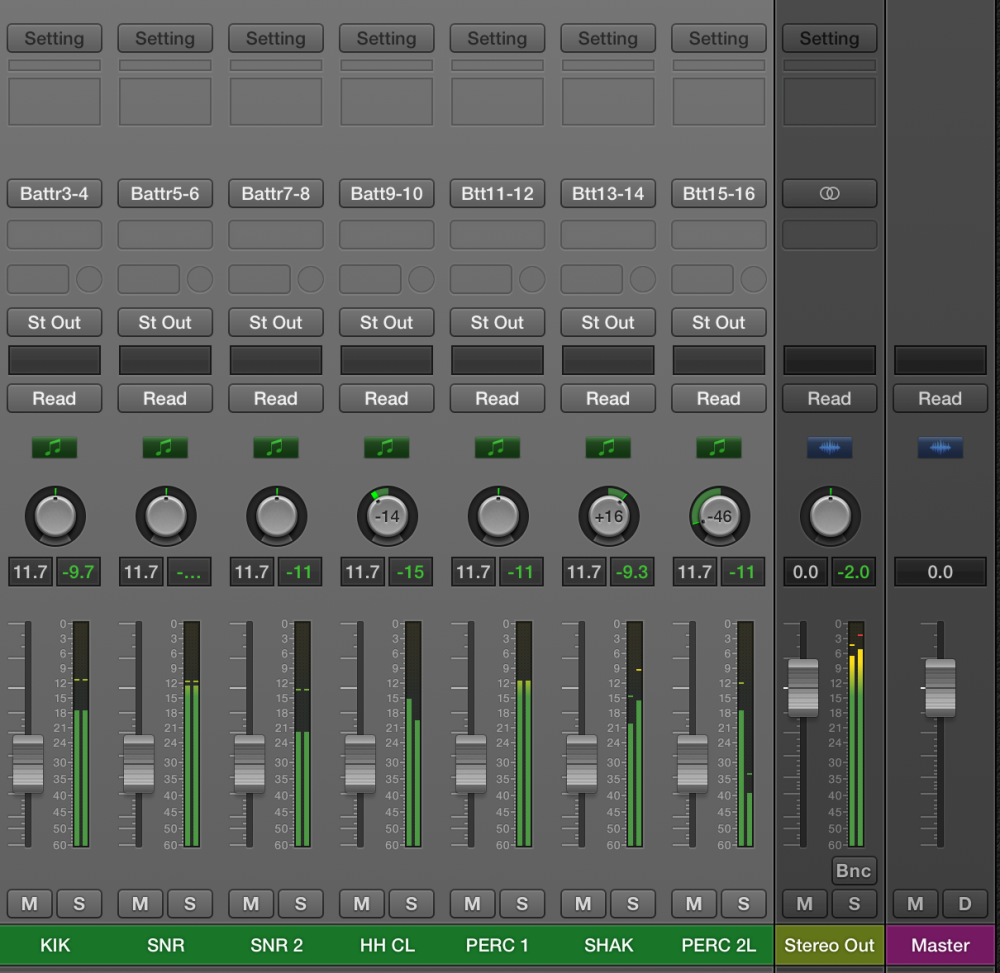 1. Let’s say we want take a group of drum tracks and send them to a Submix track. First select the desired tracks from the mixer in Logic by clicking them while holding Shift or Command, until they are all highlighted (or click and drag across the icon section of the desired channel strips). 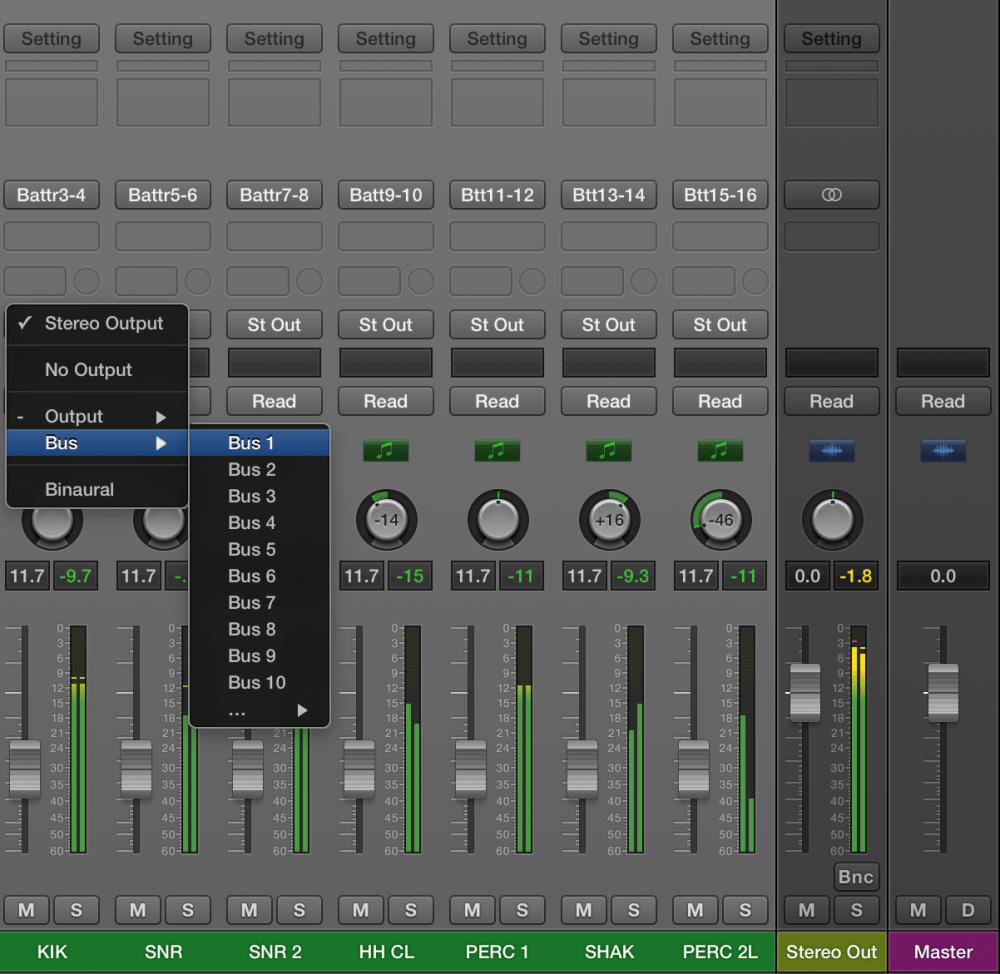 2. Now, go to the output slot (as seen above) on one of the selected tracks and choose a bus (in our case Bus 1) to route your tracks to your new Aux Submix track.

3. Logic will now automatically create a corresponding Aux track for you. The selected track’s outputs are now being summed to your Submix track. The fader, pan, FX and Sends will be applied to all of the tracks being sent here.

Note: it is a good idea to balance the faders of individual tracks being routed this way to so the new Submit Aux track is clipping or being overloaded. Bring down the individual faders that being sent to a Submit track until the red clipping indicator is going crazy. Giving yourself ample headroom is usually a good idea, so don’t be afraid to turn them down quite a bit if needs be.

While in some cases using FX directly on the individual tracks of your composition makes perfect sense, some FX like reverb and delay are commonly used as FX Sends. Not only will this reduce your CPU usage (considering how much of a beast Space Designer can be), but it will also allow us to separate the wet or effected signal, with the dry or non-effected signal. It can also bring the various instruments of a piece into the same “space”, again, to create a more lush and cohesive sound.

As we mentioned above, Logic will automatically create an Auxiliary track for you, so creating a reverb or delay FX Send is as easy as choosing a Bus or pathway from the Send section of your desired channel strip(s). If that sounds at all complicated, don’t worry, here’s how to set it up set-by-step:

1. Now we want to Send our drum tracks to a single reverb. First select the desired track from the mixer in Logic by clicking them while holding Shift or Command, until they are all highlighted just like above. 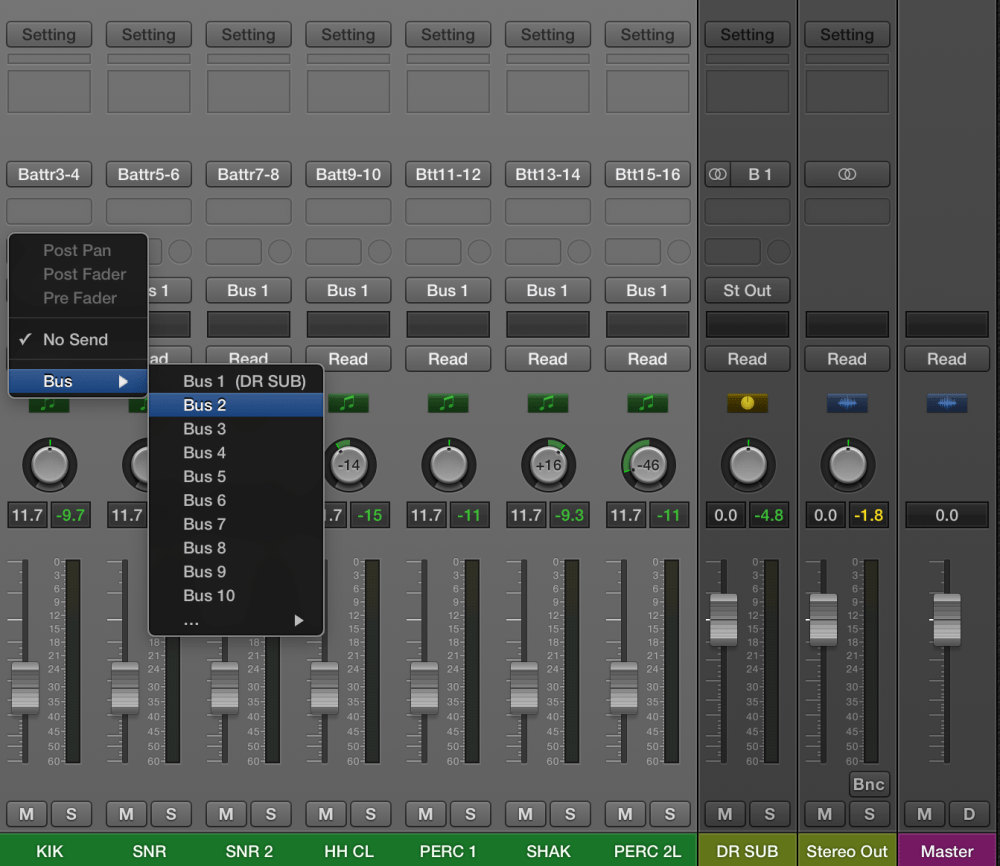 2. Now, go to the first Send slot (as seen above) on one of the selected tracks and choose a Bus (in our case Bus 2) to use for your new FX Send. Logic will now automatically create a corresponding Aux track for you to apply FX on. 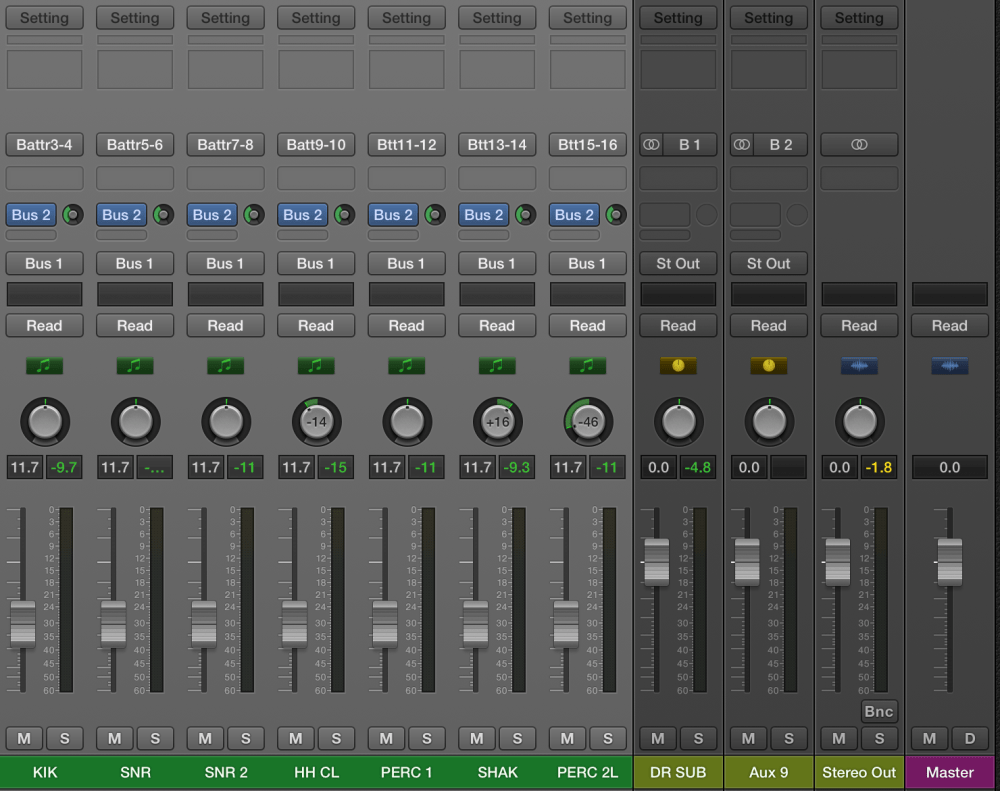 3. While we still have all those tracks selected on the mixer with a new Send set-up, you’ll see that a little knob has appeared in the Send slot. This determines the amount of signal we split off or send to our new FX Send Aux track. For now let’s turn that knob up to about halfway to send to some signal from each of the selected drum tracks.

Note: This can all be altered to taste on a track-by-track basis at anytime.

4. Your new FX Send Aux track will appear at the far right of your mixer, just to the left of the master output. Now we can apply reverb, delay and well, just about any FX we own for Logic to this Aux track. Then use the Send slots on any track in our session. For our example today, we have a Space Designer reverb setup above. 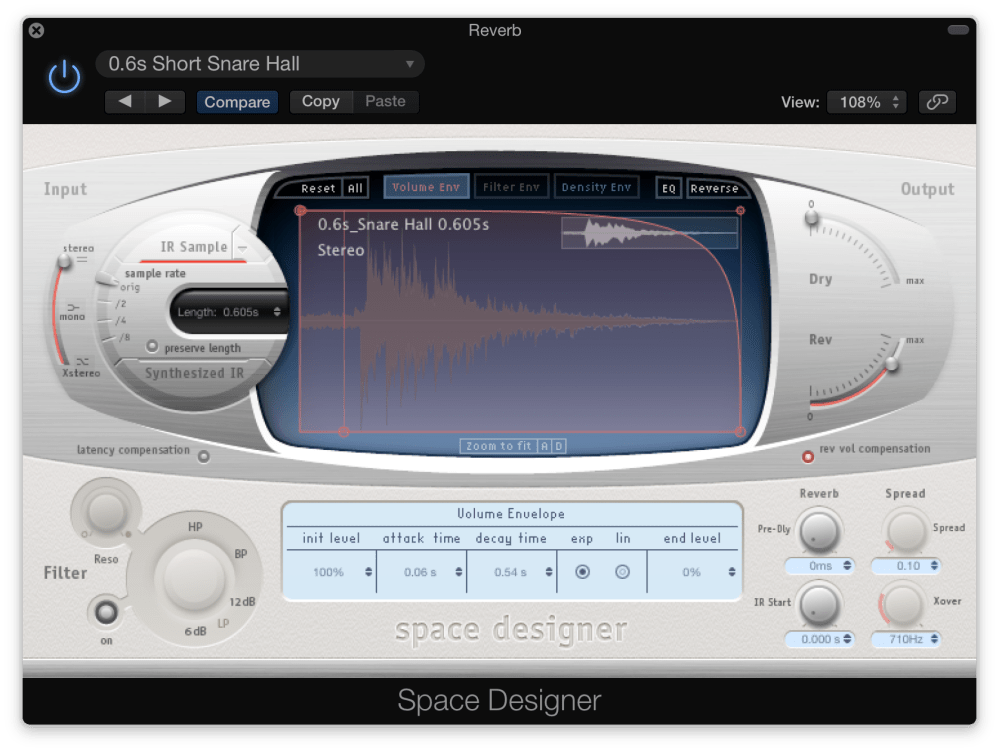 Note: it is very common to use 100% wet and 0% dry settings when using reverb and delay FX Sends (as seen above), but as with anything, it is always recommended to use your ear and experiment. 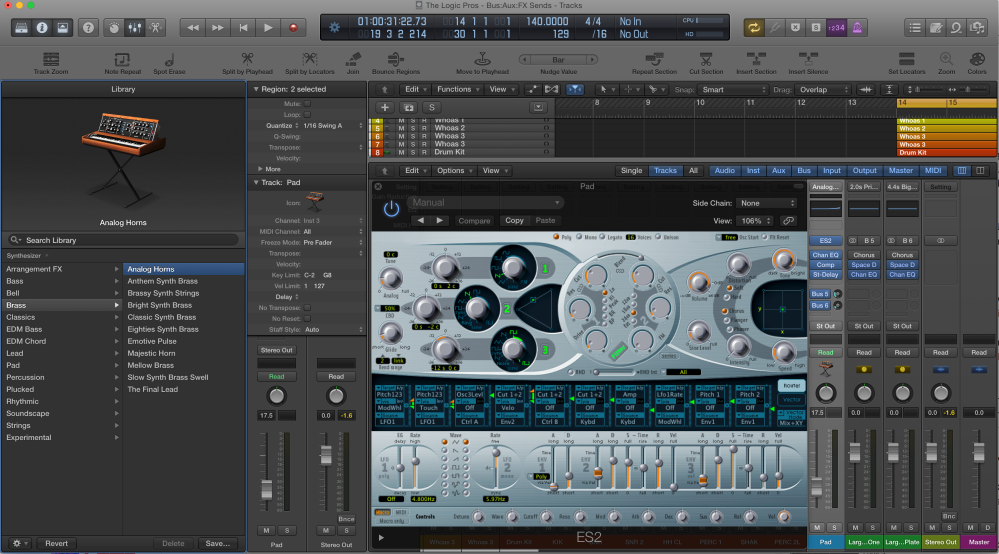 Logic users that frequent the Library of preset instrument patches on LPX will likely have noticed that in many cases Apple has setup bus sends for us. We are basically going over how to set these things up manually, allowing us to fine tune our mix. Personally, I prefer to have just a few reverb/delay FX Sends for an entire song, so some Library patches with spacial/time effects can actually be a bit overkill/annoying from time to time.

And there we have it, some of the most useful applications for busses, aux tracks and Submixes. There are a number of ways to get creative we these techniques by experimenting with which tracks get sent where and which FX you use. There various uses described here are just starters and can be a great way to understand some of the more complex patches and setups found in LPX and just about all other DAWs. Have any interesting uses for busses and aux tracks in Logic? Let us know in the comments below.