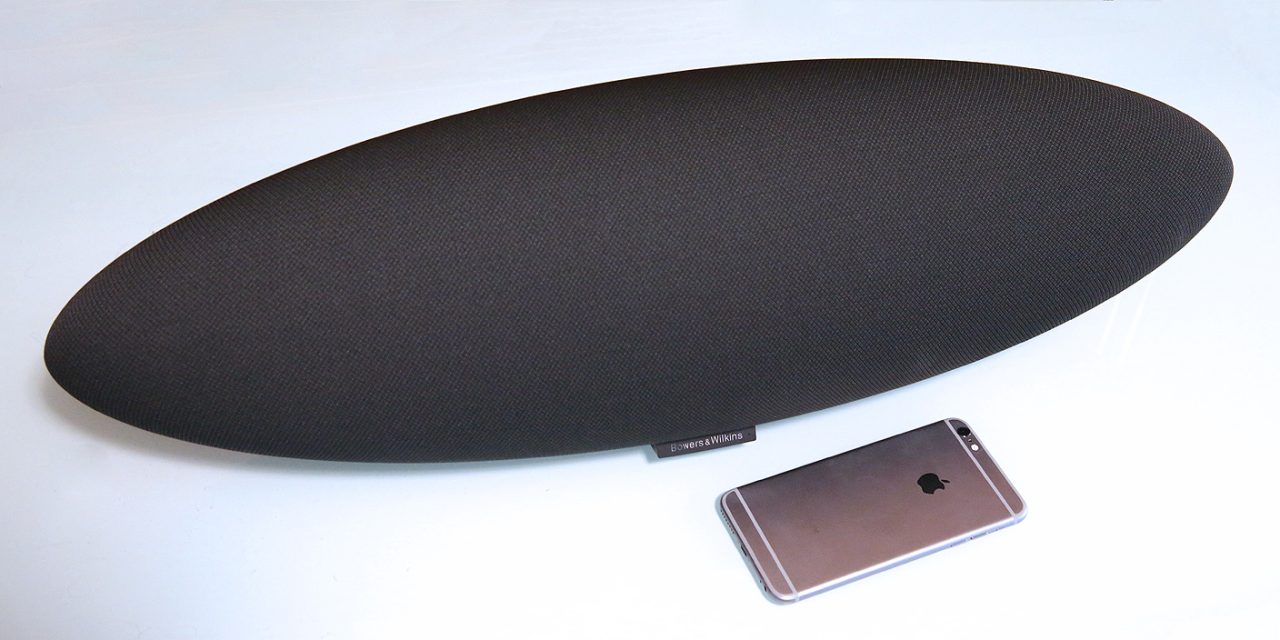 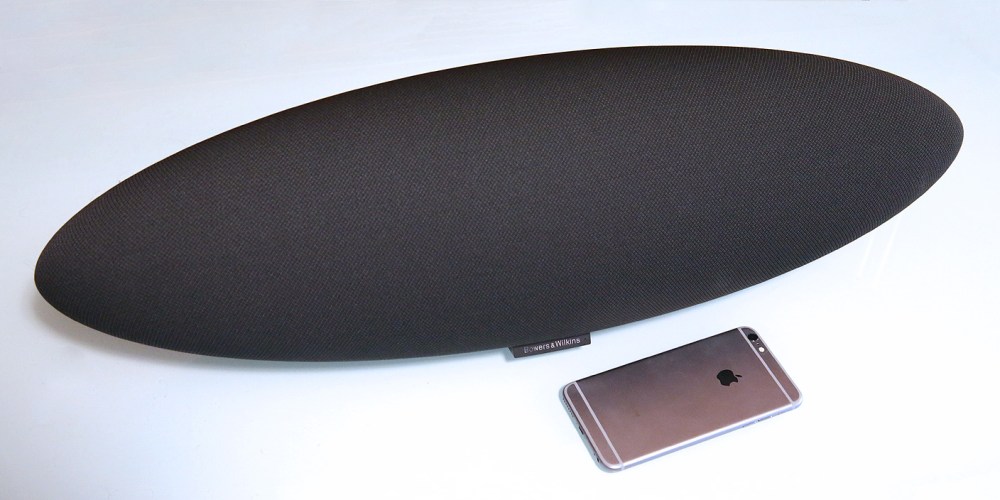 I don’t envy any vendor of legitimately premium audio accessories made for Apple’s devices. After established audio companies including Bose, Klipsch, and Bowers & Wilkins demonstrated that Apple device owners were willing to pay $300, then $400, then $600 for all-in-one speaker systems with increasingly better sound quality, Beats by Dre materialized, hooking people on expensive, stylish, and sonically underwhelming alternatives. Between Beats and the Bluetooth revolution, it seems clear that the speaker market is all about flash and convenience rather than audio quality… right?

Of course not. There have always been low-end, mid-range, high-end, and ultra-premium audio options; Beats has succeeded at capturing (a lot of) low- to mid-priced customers. By comparison, the respected British speaker maker Bowers & Wilkins focuses on the upper end of the scale. It literally established the high-end Apple speaker category with its original Zeppelin back in 2007, then refreshed it with AirPlay support as Zeppelin Air in 2011.

Now that another four years have passed, B&W has returned with another “even better” sequel: Zeppelin Wireless ($700). Having spent years touting its atypically upscale design and components as alternatives to low-fidelity speakers, the company is offering a compromise to broaden the new Zeppelin’s appeal. Despite packing speaker and amplifier hardware that’s in the same league as B&W’s $800 A7, Zeppelin Wireless includes a key feature — Bluetooth — only found in its entry-level $350 model T7. But the new Zeppelin still has AirPlay, for those who care, as well as Spotify Connect. So while the price tag may limit the number of people who can afford this new all-in-one speaker, its feature set has broad appeal…

Zeppelin Wireless’s industrial design continues the ellipsoid shape of the earlier Zeppelins, though like Apple, Bowers & Wilkins has continued to iteratively refine the initial concept. Despite the polarizing shape, this is actually the most neutral-looking Zeppelin that Bowers & Wilkins has ever made, thanks to a series of small and large tweaks that are mostly positive. Compared with its predecessors, I prefer the way Zeppelin Wireless looks both up close and from a distance, as its updated textures give it more of an ability to blend into a room. 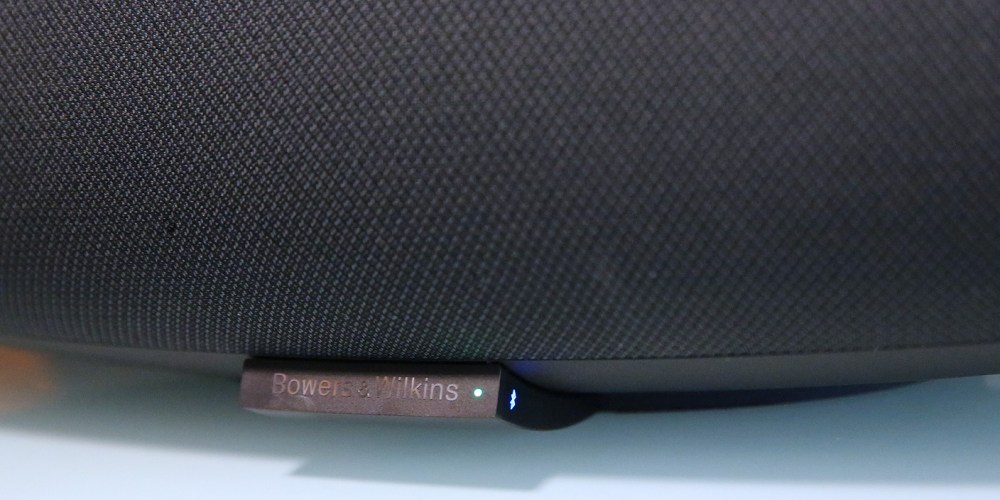 To start with the small changes, Zeppelin Wireless is now around 26″ wide rather than just over 25″, 7.4″ rather than 6.8″ tall, and 7.2″ rather than 8.2″ deep, changes that accommodate the new model’s larger speakers. B&W has removed virtually all traces of glossy plastic from the chassis, and upgraded the front fabric from a slightly shiny material to a more sophisticated black and gray grid. The back is now matte-finished, and there’s no bass port on the rear, a surprise since prior Zeppelins had prominent rear vents. 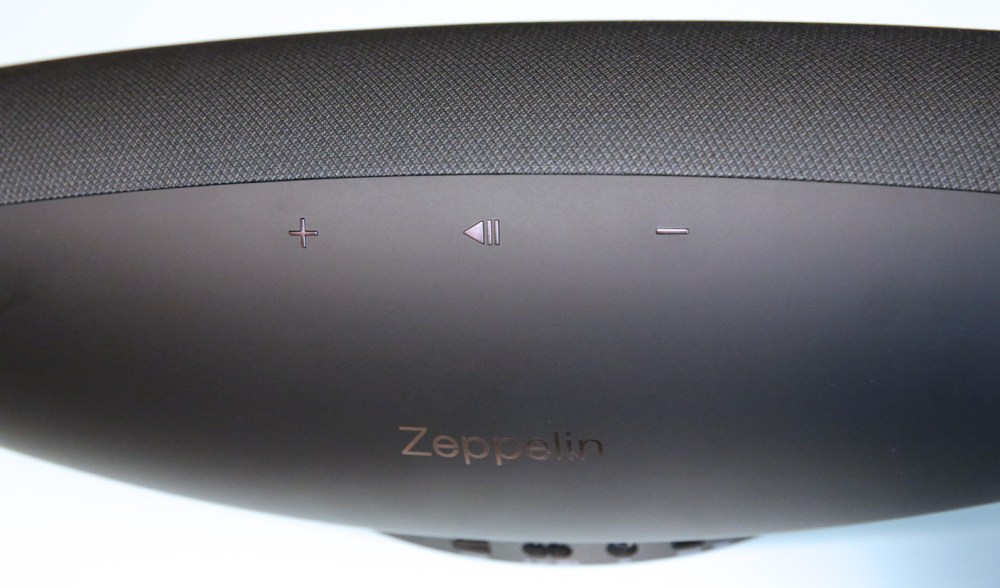 Three large buttons are obvious near the top rear, ready to adjust volume and play/pause status, while aux-in and Bluetooth buttons are hidden on the left and right front sides of Zeppelin Wireless’s stumpy new base. A tiny multi-colored dot off to the right of the metallic Bowers & Wilkins logo is the only power and status indicator, changing from off to red to green, while a small blue-glowing Bluetooth logo on its side indicates active Bluetooth pairing. This is another set of welcome design improvements; the original Zeppelin hid one large status light behind its speaker grille, and the smaller new solutions are more subtle, enhancing a pinhole-sized lighting design found on B&W’s A7. 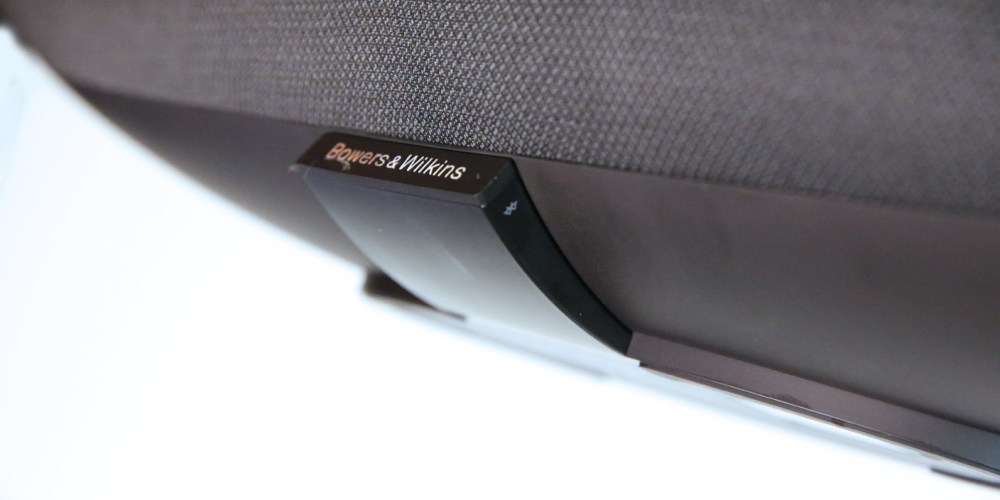 On the “highly noticeable” side, B&W has chopped off the chrome Dock Connector/Lightning dock that protruded from the Zeppelin and Zeppelin Air, eliminating Zeppelin Wireless’s ability to mount and charge a connected device. While the dock was a signature Zeppelin component back in 2007, it declined substantially in utility and desirability after Apple discontinued the 30-pin Dock Connector, making its omission in Zeppelin Wireless almost irrelevant. The 1″ savings in depth is primarily attributable to the missing dock. 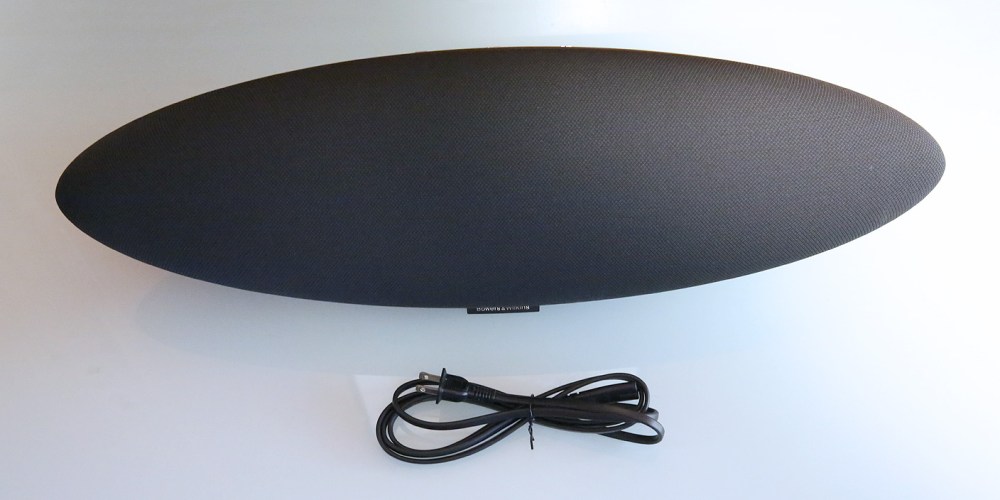 Because it’s expected that you’ll hold your device while streaming audio to Zeppelin Wireless, B&W doesn’t include a remote control or any other frills in the package: all you get is a wall power cord and a collection of printed materials. The rear ports now are solely for wall power, optional Ethernet connectivity, 3.5mm analog aux-in, and a micro-USB service port. A tiny reset button is there if the system’s settings need to be erased. 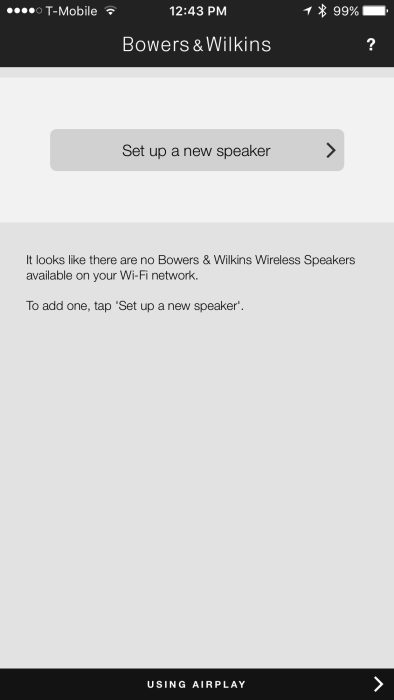 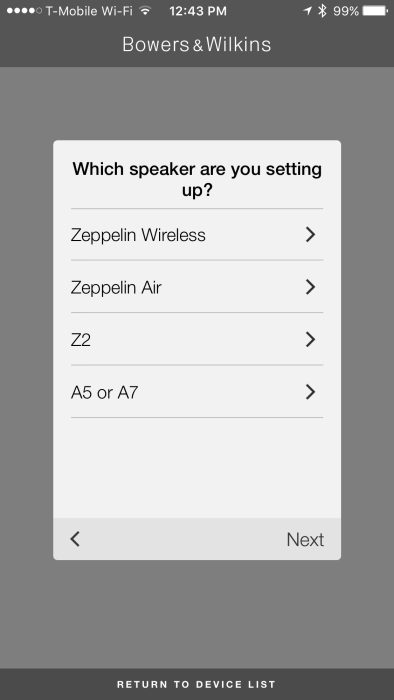 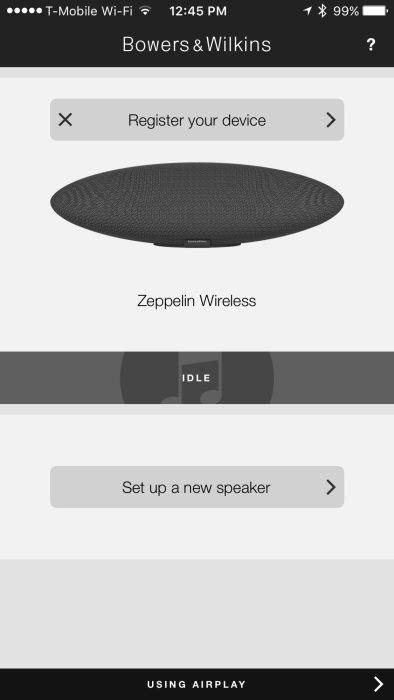 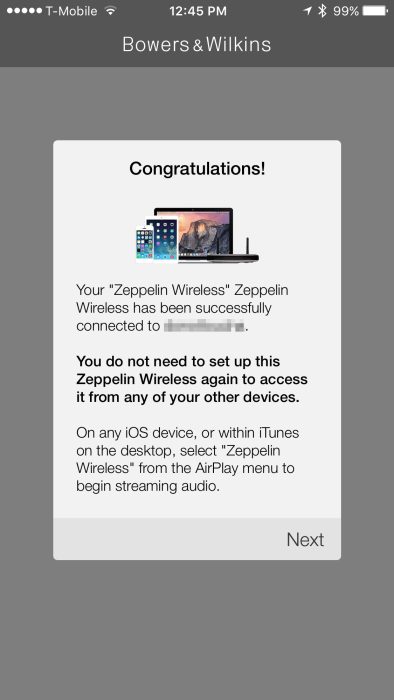 Setting up Zeppelin Wireless is easy. If you want to use it as a Bluetooth speaker, you just hold down the right-of-base Bluetooth button for a couple of seconds, select it from your iOS device’s Bluetooth menu, and start streaming. You can also use Bluetooth to automatically wake Zeppelin Wireless from sleep and begin playing a track, a great convenience. Alternately, if you prefer to use AirPlay, you download B&W’s free Control app (ab0ve), share your iOS device’s Wi-Fi settings with Zeppelin Wireless, select it from the AirPlay devices menu within Control Center, and press play. There’s a rear power button to turn the unit off, but it can be left on if you don’t mind the power drain. The system draws under 0.3W of power in standby mode, versus 0.8W in Zeppelin Air. 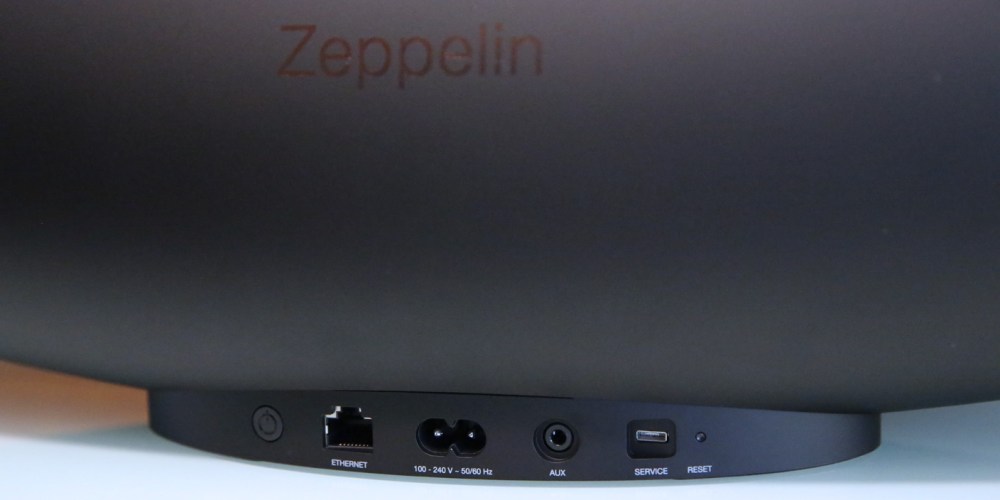 The part that’s no surprise but difficult to handle psychologically is that the Bluetooth experience is for the most part superior to AirPlay. Most audiophiles know that AirPlay offers higher bandwidth and the potential for lossless audio, thus the ability to take fuller advantage of Zeppelin Wireless’s 24-bit/192kHz DAC. AirPlay speakers can also be used — if controlled by a computer running iTunes — for simultaneous, synchronized audio, even across multiple rooms in a home.

Like Zeppelin Air, Zeppelin Wireless can do all of that. But the new model’s Bluetooth 4.1 chip is, despite its lower bandwidth, faster for pairing and more reliable for wireless streaming than AirPlay. During my testing, there was zero perceptible Bluetooth lag when changing volume, play/pause status, or tracks — something that can never be said for AirPlay streaming — and I was able to walk the entire length of a house without losing the Bluetooth wireless signal. By comparison, the AirPlay streaming (like virtually all AirPlay speakers I’ve tested) dropped out, most frequently when I went to change tracks or play/pause status; it’s unclear whether this is an iOS or speaker bug. I could switch effortlessly from an AirPlay to Bluetooth connection, but when I went in the other direction, there was an extended buffering pause. These sorts of issues with AirPlay are regrettably common, and the reason most people have stuck with Bluetooth. 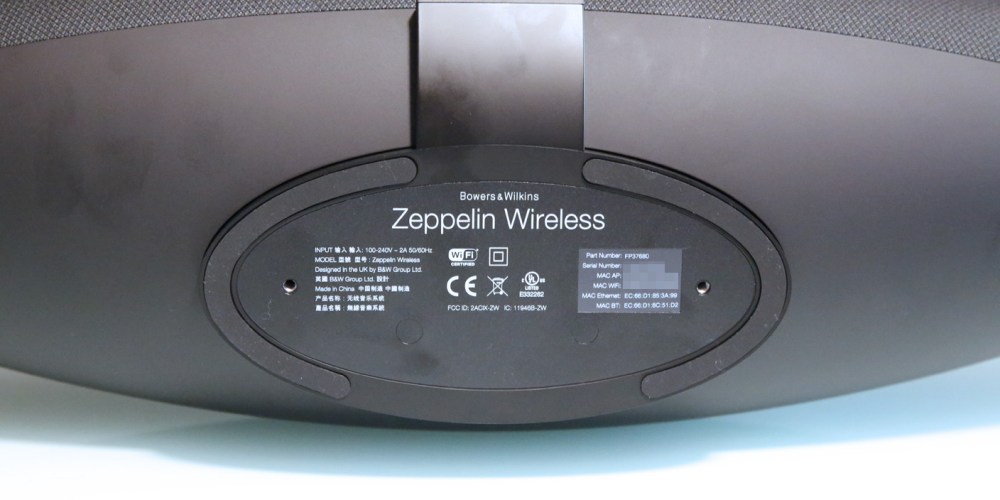 What about differences in sound quality using Bluetooth or AirPlay? Most people under most circumstances would be hard-pressed to find any difference in quality between music played over Bluetooth versus AirPlay — I ran a bunch of comparisons with songs across various genres, and couldn’t find a case where the difference was even apparent at normal volumes. It’s nice that Zeppelin Wireless supports both standards, but there’s a lot of reason to prefer the way Bluetooth works as a daily driver for even a $699 speaker.

Sonically, Zeppelin Wireless continues the performance trend the Zeppelin family has been on for eight years, making meaningful under the hood technical improvements that are hidden behind the fabric facade, which notably has been radically reinforced for extra stability. In addition to using dual 1″ double-dome tweeters, the new model upgrades from twin 3″ to twin 3.5″ midrange drivers, and from a 5″ to a 6.5″ subwoofer. B&W’s web site currently lists the subwoofer as 6″, but the company’s representatives (and external pages) note that it’s actually larger.

Collectively, the changes mean that most of Zeppelin Wireless’s speakers are at least a little larger than the ones in B&W’s boxy $800 A7, which combine with the larger chassis to deliver even bigger, wider stereo sound. However, amplifier power remains the same at 150W total, a hint that the systems aren’t as different as might be guessed from the outside. It’s also worth noting that the new model’s lack of venting ports in the back means that bass won’t change as much based on this Zeppelin’s proximity to a wall.

In practice, all of the components combine to create a system with the ability to perform wonderfully at both soft and very loud volume levels, though the same was true of the prior Zeppelins and the A7 as well. B&W’s five-speaker array is, by design, able to replicate virtually every bit of the audio spectrum people are capable of hearing, lacking only in the deepest, sub-sonic bass levels one might get from a large, dedicated subwoofer. Regardless of the genres of music I tested with it, Zeppelin Wireless provided impressively balanced, detailed renditions of the original audio, letting me hear both the nuances and the flaws in my test tracks. Only at its very top volumes, namely enough to fill a medium-sized room, was a hint of distortion apparent. 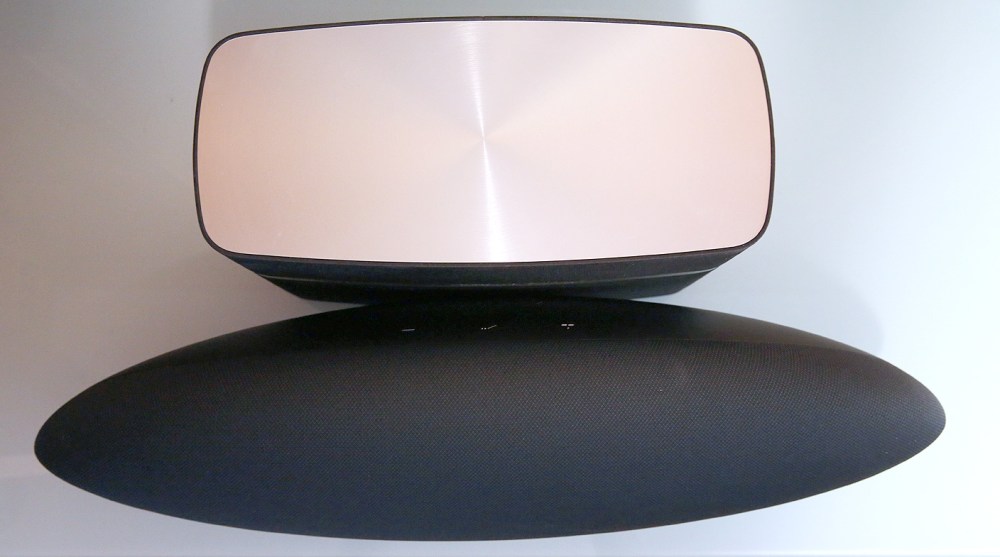 When compared directly against the more expensive A7, Zeppelin Wireless offered ample but more controlled bass, a strong, detailed midrange, and roughly equivalent treble. Given that Zeppelin Wireless has a larger subwoofer, I was surprised that its low end wasn’t as forceful as A7’s, but either the lack of a bass port or otherwise deliberate restraint on B&W’s part give the new Zeppelin a more refined, less gravelly growl. I preferred Zeppelin’s balance, but bassheads may find A7’s more pronounced low end to be superior. 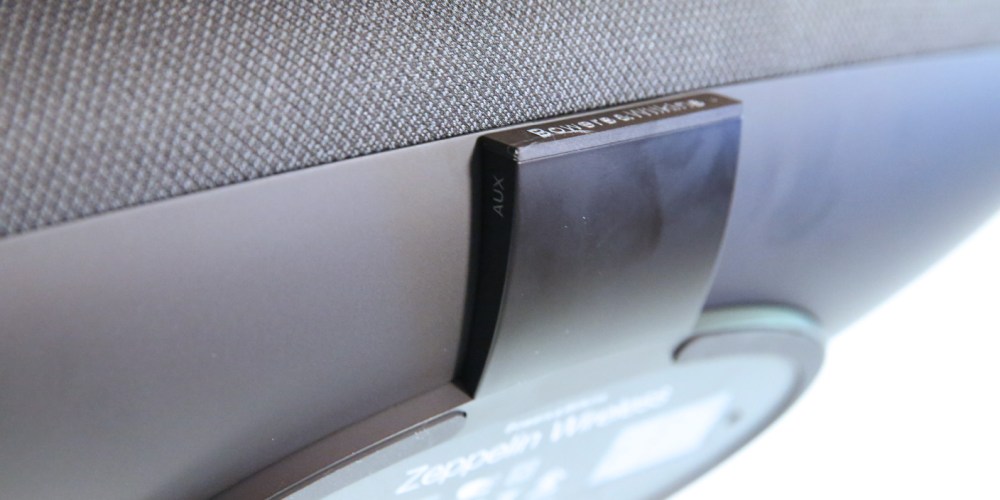 Overall, Zeppelin Wireless continues B&W’s legacy of delivering high-end Apple all-in-one systems that feel worthy of their asking prices. From my perspective, the addition of Bluetooth 4.1 is a legitimately game-changing new feature for this product, as its convenience and reliability are leagues ahead of AirPlay under most circumstances, with no perceptible sonic compromises. If you’ve considered a Zeppelin or A7 before but were holding back, Zeppelin Wireless provides real incentives to make the leap; regardless of the iOS device, Mac, or Apple TV you plan to use it with, it’ll look great while providing a ton of sonic horsepower. It’s the best Zeppelin yet, and dollar for dollar, the best overall speaker B&W has produced.