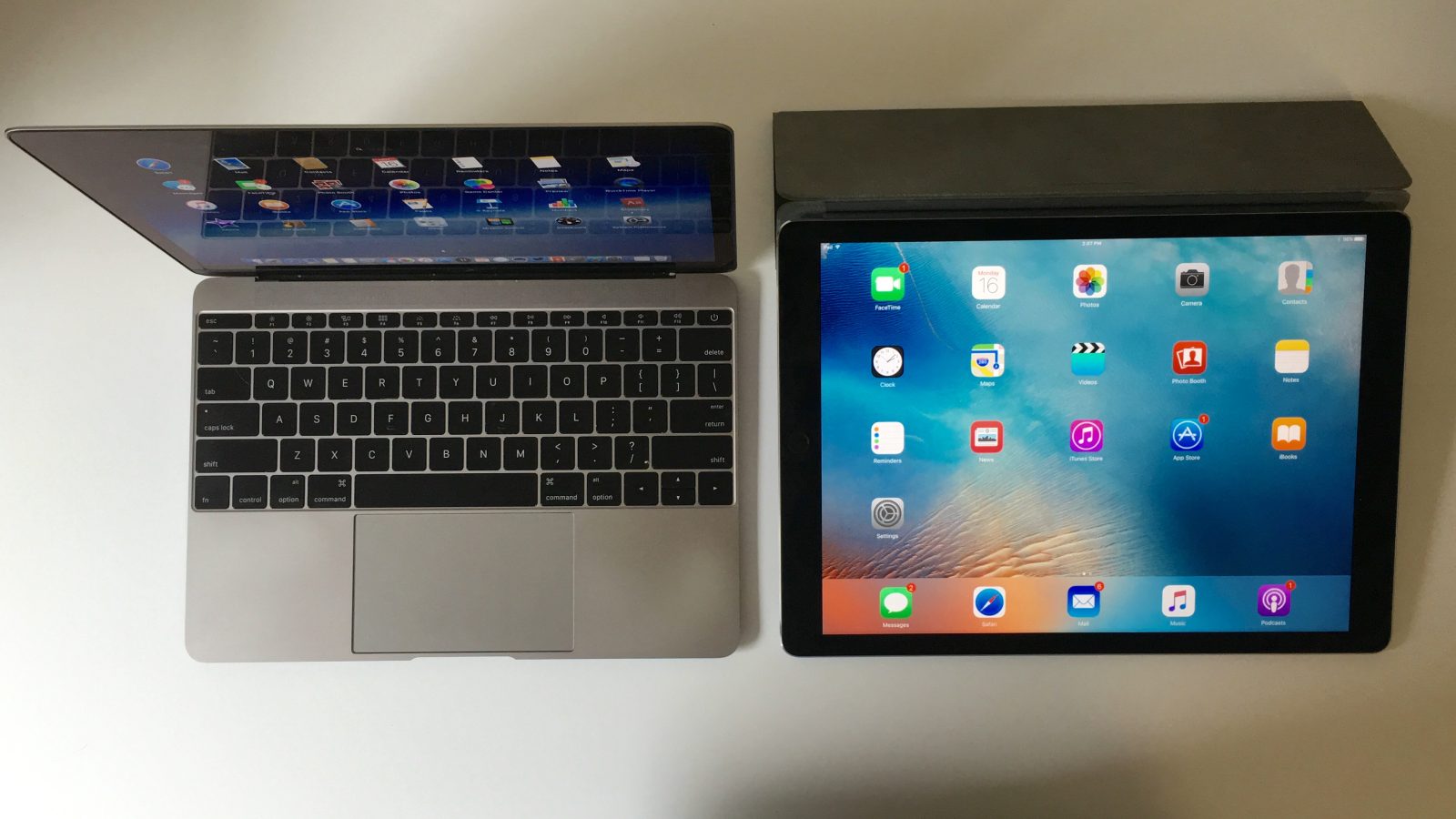 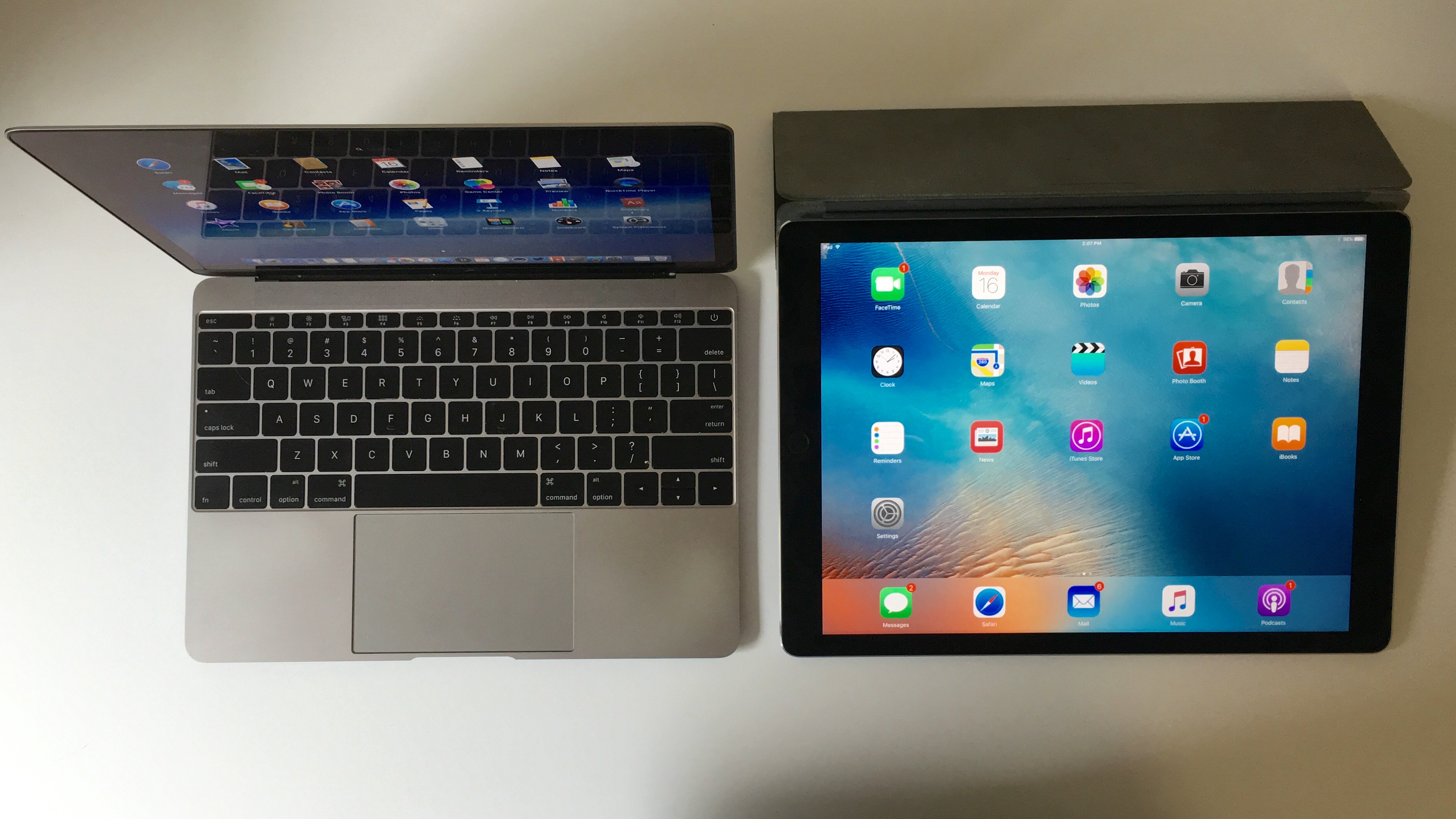 When I reviewed the 12-inch MacBook with Retina display earlier this year, my one question was this: could I possibly use such a low power machine reliably for work? For blog posting and editing, switching between chat apps and email, and keeping up with a few Twitter accounts, the single-port MacBook is totally fine, and the Retina display was an upgrade over the dated one on my old MacBook Air.

While I’d like to apply that same question to the iPad Pro, which has a slightly larger display and effectively twice the battery life of my MacBook, the difference in how iOS and OS X handle multitasking and window management currently limit my ability to apply my same workflows from the Mac to the iPad. That didn’t stop me from lusting after the iPad Pro when it hit stores last week. Despite the Pro in its name, I think the new iPad is the best content consumption tablet on the planet. 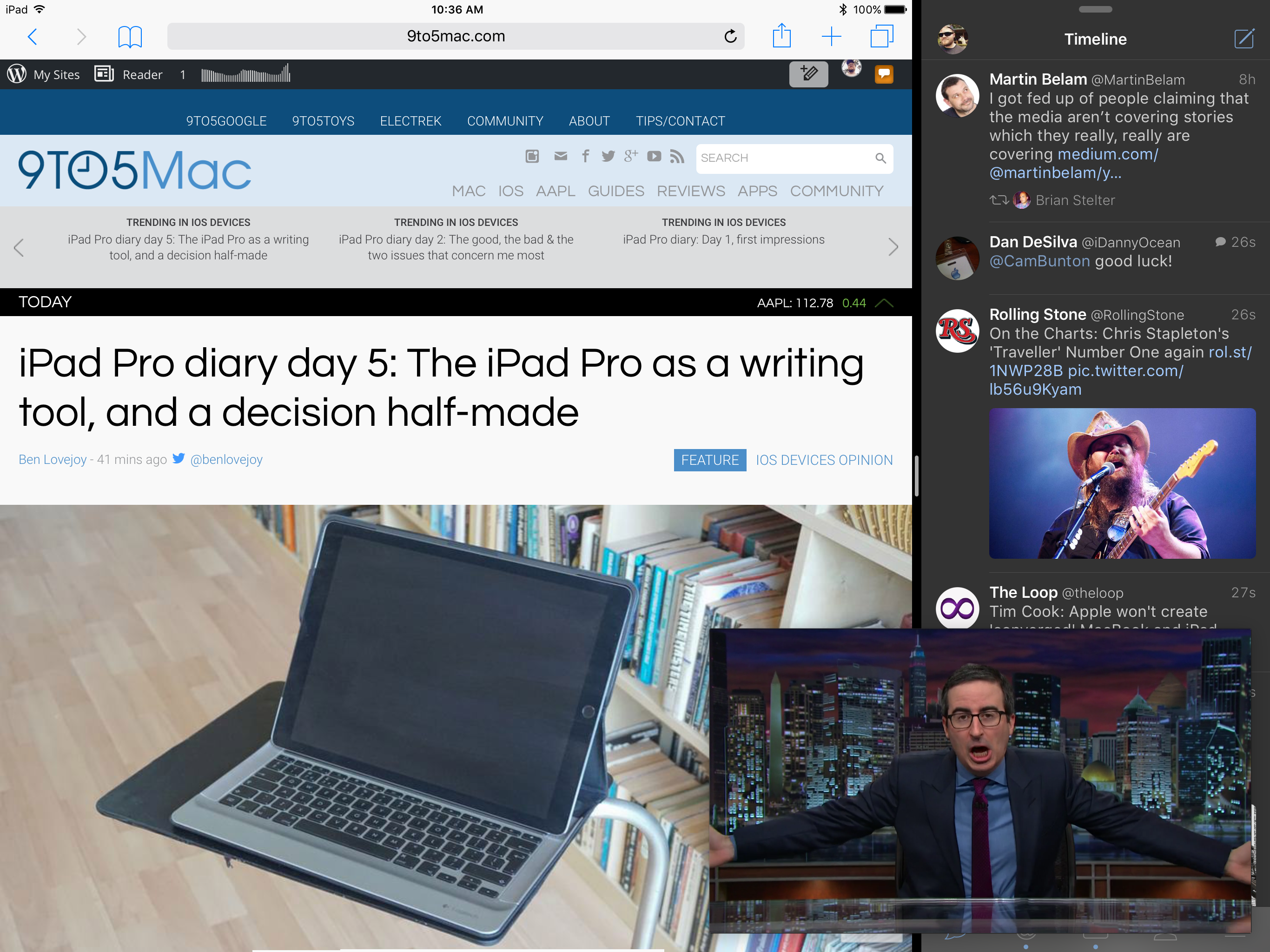 iOS 9 on the iPad added new multitasking features that let you use two apps at the same time. Slide Over lets you peek into new apps without leaving your current app: open Messages to send a quick message while browsing in Safari then dismiss it. Split View lets you actively use two apps side-by-side: parse your inbox on Mail on the left and view your Calendar on the right. And Picture in Picture, which I find completely brilliant, lets you overlay video from supported apps like Safari and Hulu over the Home screen and other apps including during Split View: browse online in Safari on the left, keep up with Tweetbot streaming on the right, and watch a TV show from HBO in any of the corners. 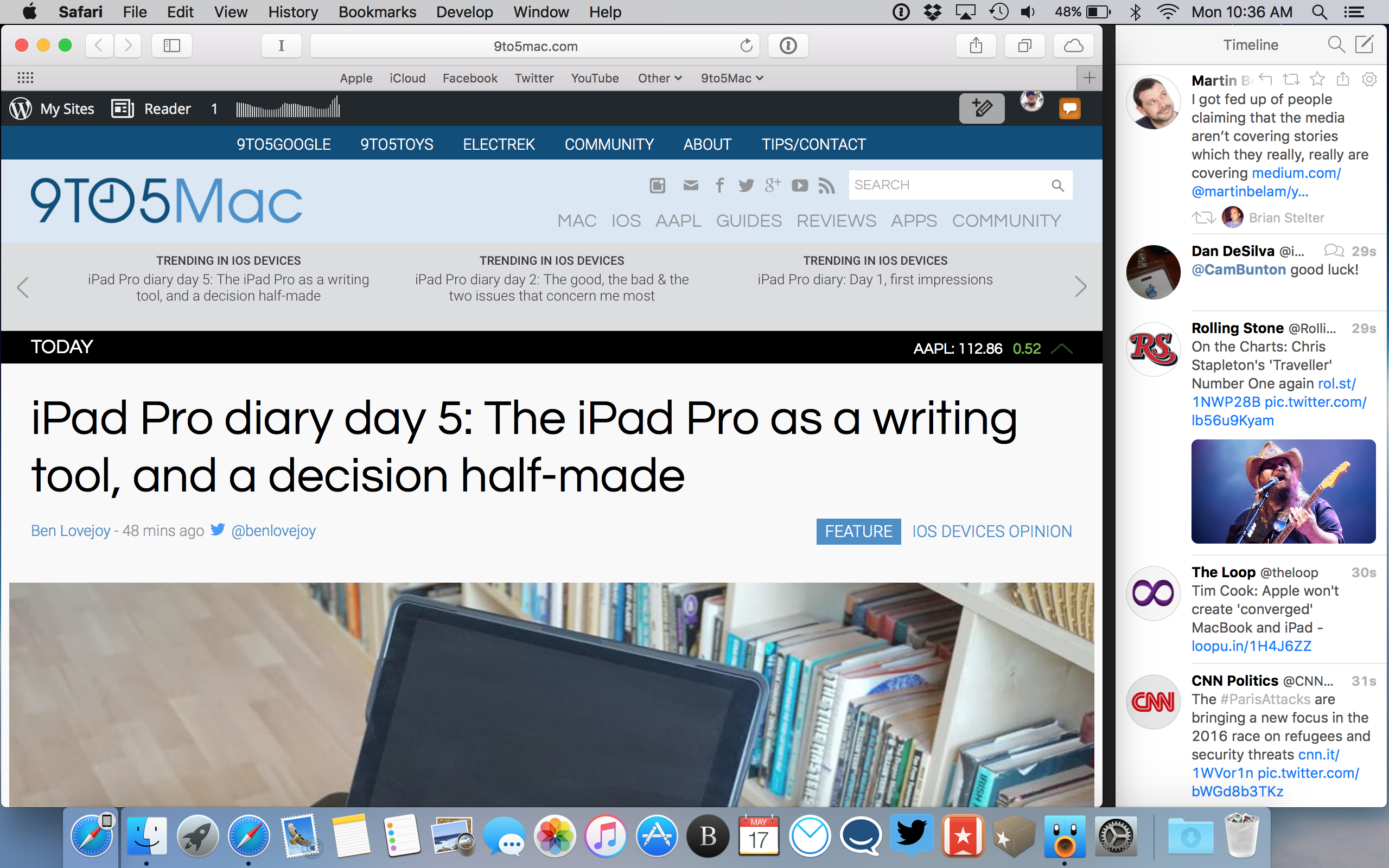 Here’s that same setup on my Retina MacBook. The Mac also gained Split View this year with OS X El Capitan, although Tweetbot doesn’t yet support it. Still, the Mac offers window management that lets you recreate similar arrangements as the iPad. The two displays both show about the same amount of content and I could hide both the dock and menu bar to gain a little more real estate if I wanted, but out of the box the Mac has no Picture in Picture feature and I’m not aware of any third-party software to emulate it without researching. While I could try resizing a window to fit below Tweetbot on the right, the convenience of real PIP just isn’t there yet. One more important thing to note in this example: when I view HBO NOW on my Retina MacBook, the site offers a ‘playbackTechError’ and warns that Flash Player version 17 or high is required. No thanks. 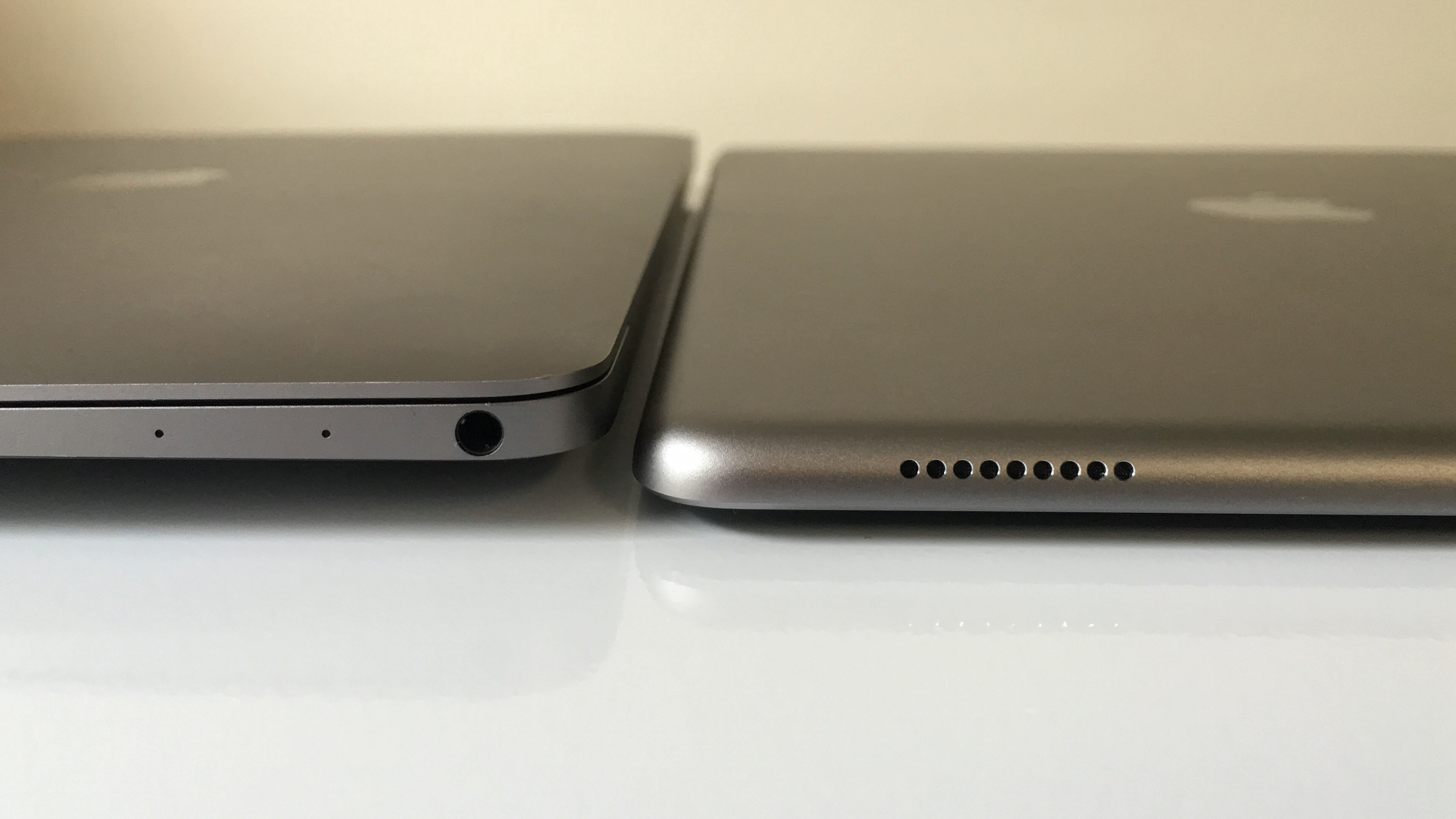 Battery life between the two devices is also a huge deal. Apple rather generously rates the Retina MacBook for up to 9 hours of wireless web usage, up to 10 hours of iTunes movie playback, and up to 30 days of standby time, but I never do any of those single tasks to achieve those numbers. Switching between at least Safari, Mail, Tweetbot, TweetDeck, Byword, iTunes, Reeder, Wunderlist, and Preview lasts for about 4.5 hours, then recharging in full during work takes another 2.5 hours. Not quite all day battery life, and that’s using the lowest-powered configuration.

It’s a totally different story on the iPad. Like every iPad since the original model introduced in 2010, Apple promises up to 10 hours of surfing the web on Wi-Fi, watching video, or listening to music, or up to 9 hours of surfing the web using cellular data on cellular models. I’ve owned the iPad 2, iPad mini, fourth-gen iPad, iPad Air, iPad Air 2, and now iPad Pro (these get sold or passed down to family, I’m not hoarding, I swear) and I’ve always found that Apple’s battery claims for iPad are accurate. When using any iPad on Wi-Fi, every 10% of battery remaining is roughly an hour of usage.

That’s not a totally fair comparison between the Retina MacBook and iPad Pro, though, because I’m not recreating my Mac workflow on the iPad yet. Another point to note: the iPad Pro takes roughly twice as long to recharge from empty to full at about 5 hours. iPad Pro uses a 12 watt power adapter with Lightning compared to the Retina MacBook’s 29 watt power adapter with USB-C. (This might have been dangerous and/or a bad idea, but using a USB-C adapter to try recharging the iPad Pro with the 29 watt adapter made no difference. 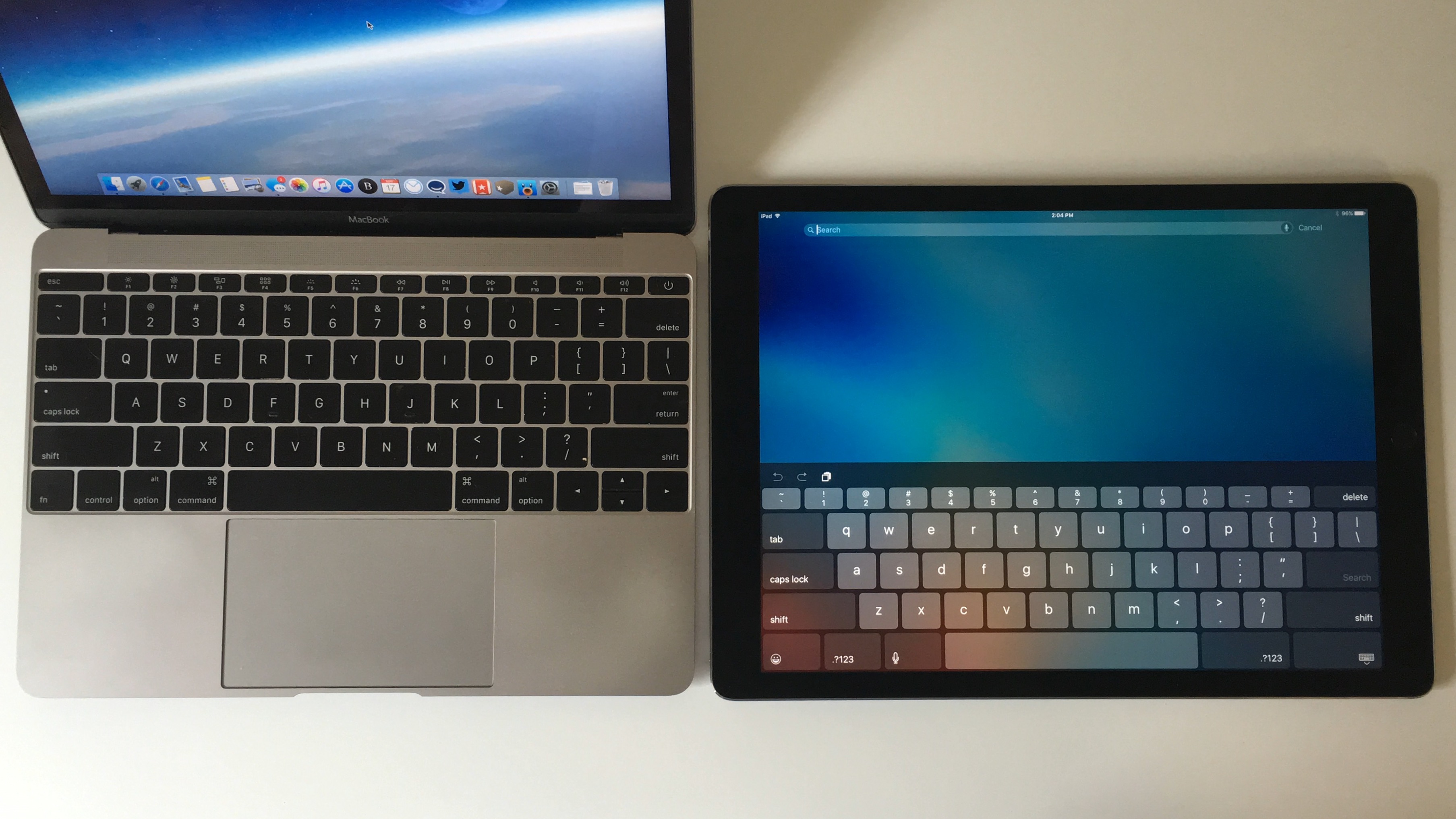 Storage is also a big difference. iPad Pro tops out at 128GB and the Retina MacBook starts at 256GB. I haven’t thought much about why, but I can live with a 32GB iPad Pro (the entry-level $800 model) and wouldn’t seriously consider a Mac with twice that storage. RAM is the same story, 4GB versus 8GB, although the difference here is less obvious considering iOS limits how many apps iPad Pro can run in the foreground. 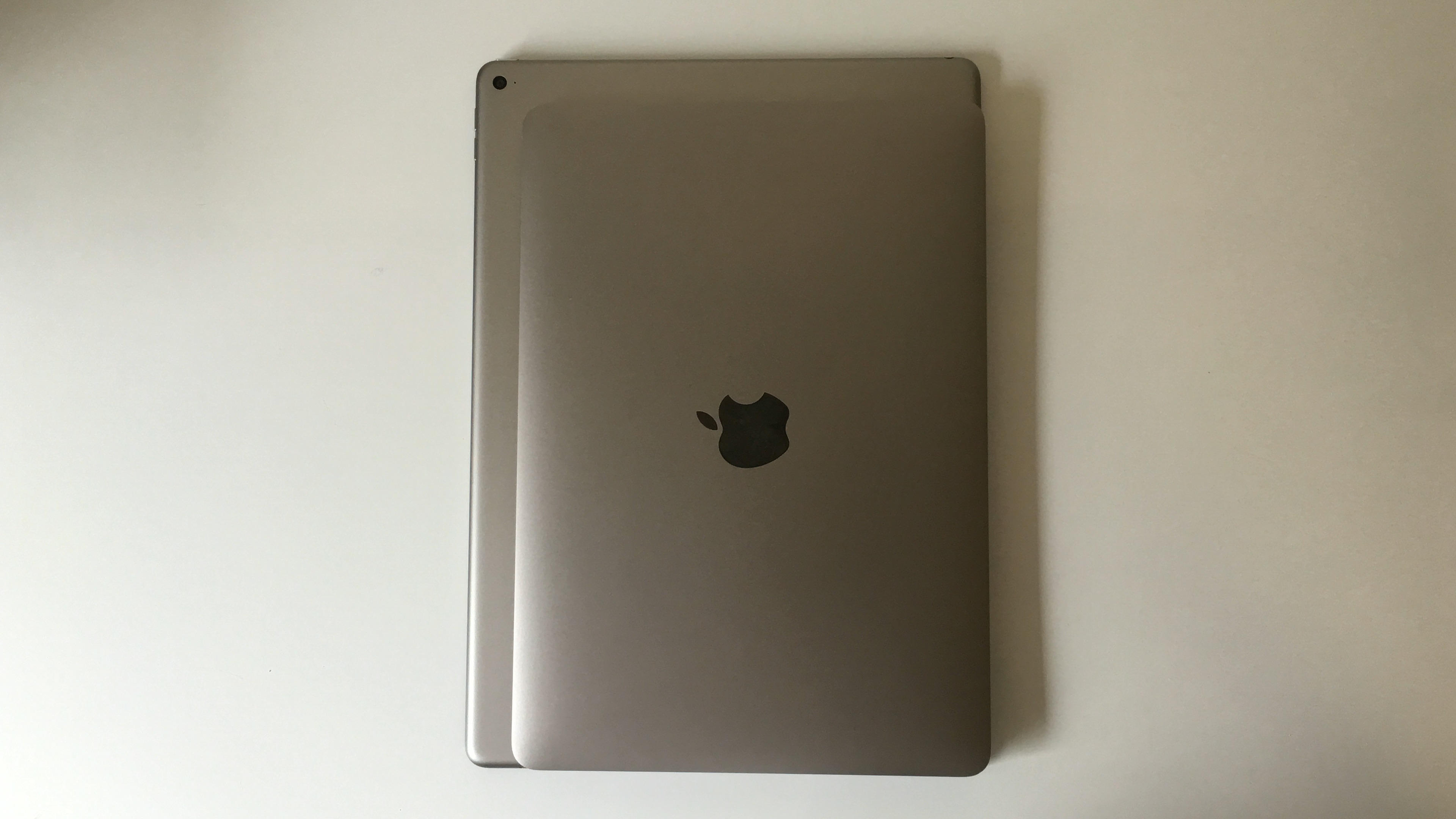 The bottom line here for me is that I’m hiring the Retina MacBook and iPad Pro for totally different jobs. There may be some cross-over for which workflows I can have on both devices, especially if iOS 10 continues what iOS 9 started and focuses heavily on catching the iPad’s software up with its hardware capabilities, but for now their roles are distinctly defined for me and there’s no temptation to replace one with the other.

I would love to see the Mac learn how to do Picture in Picture just like the iPad does. But I’d really be impressed if the iPad had free floating windows and an improved iCloud Drive app for moving files around. iOS has made a lot of progress in the last two or three years in this area, but there’s still some work to be done before the iPad Pro (or any iPad) become viable laptop alternatives for me. 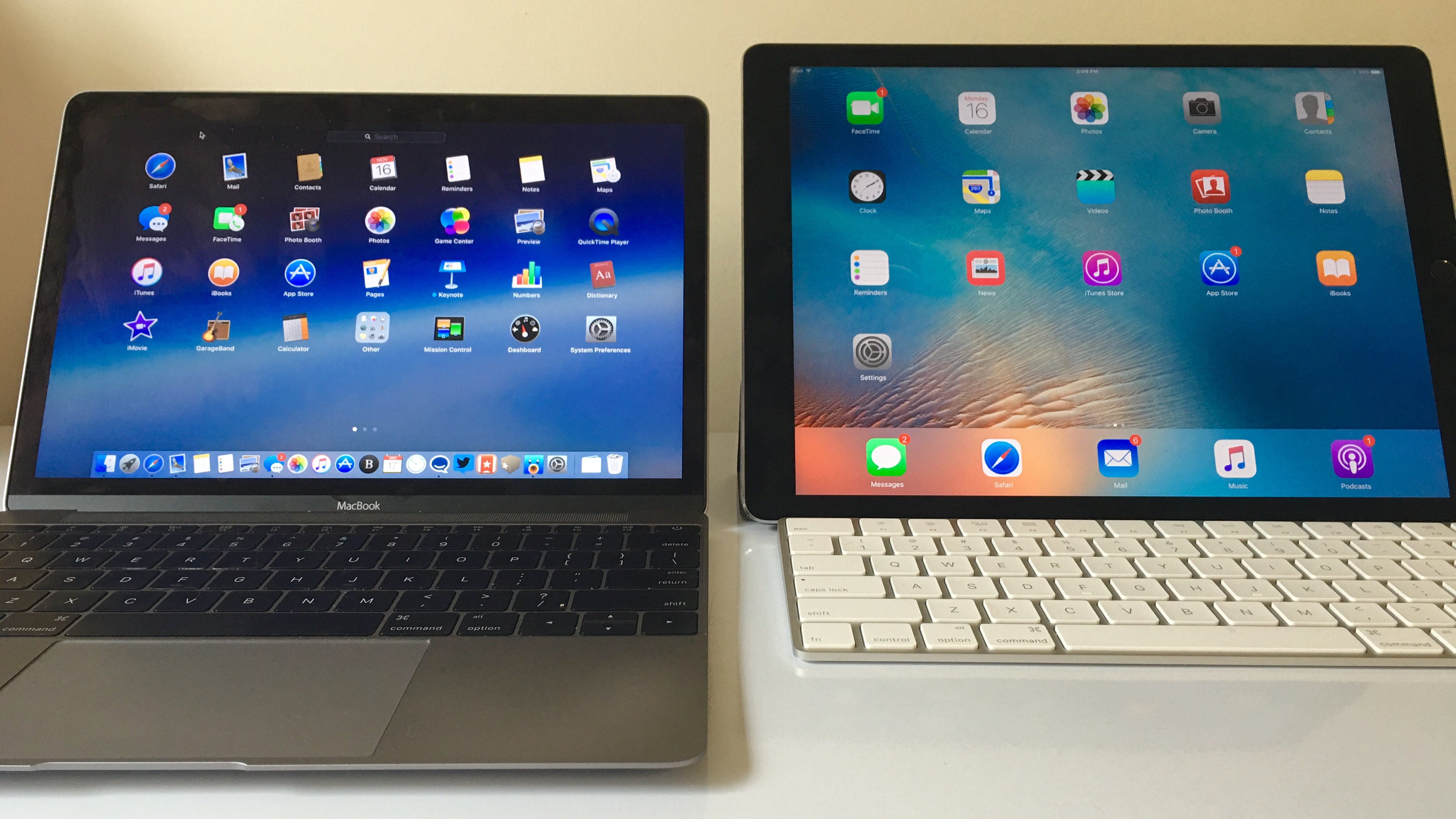 For me, the Retina MacBook is like a sleek motorcycle that gets me to and from work in style without sacrificing my ability to use the same roads as someone driving a MacBook Pro and iMac. iPad Pro for me isn’t in the same category; it’s more like a portable home theater with a big screen and killer sound system where I can lounge and be entertained. Everyone will use these devices differently, but that’s where I’m at with the Retina MacBook and iPad Pro in their current form. 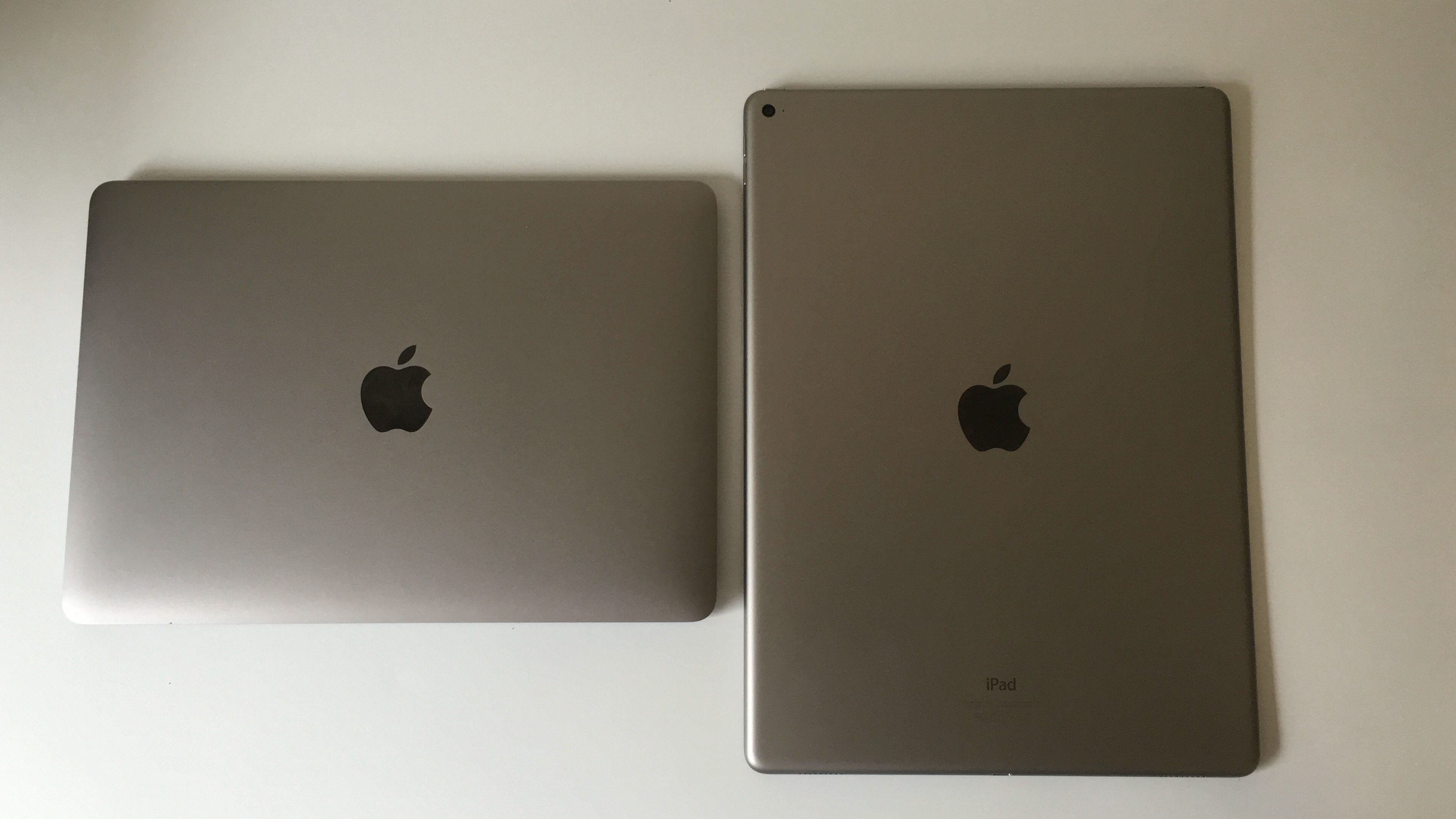 I’ll wrap this up with a couple of observations about the iPad Pro with the Retina MacBook in mind. First, the Retina MacBook feels way more portable. It’s physically smaller, only slightly thicker than the iPad Pro, and includes a physical keyboard and trackpad. iPad Pro takes up noticeably more space, but there’s something just plain cool about a really big touch screen to me.

Next is the Apple logo on the back of the iPad Pro and Protective Case. It’s the same position and orientation as the iPad mini and iPad Pro, positioned correctly when holding the iPad in portrait orientation. There’s really not a lot of times when portrait feels like the right orientation for a 12.9-inch tablet in my opinion. Add that the promoted Smart Keyboard puts the Apple logo totally sideways when used and it starts to feel a lot like when Apple notebooks had upside-down logos when in use.

So for me the iPad Pro isn’t a laptop replacement even though I had no problem using a single-port MacBook for work, but I’m still really glad the iPad Pro exists. The massive Retina touch screen takes some getting used to if you’ve spent a lot of time with smaller iPads, but it’s an awesome portable home theater.