Review: Apple Watch Magnetic Charging Dock is simple and elegant, but may not be for everyone [Video]

It’s been quite a while since Apple Watch came out (7 months!) and finally Apple has released an official dock accessory that might be worth a look. Maintaining typical Apple style, this watch dock is very simple…

There’s really not much to it at all. Inside of the box, you’ll find the dock itself and a 2-meter Lightning cable along with some simple documentation. The good news is that the magnetic charging puck for Apple Watch is completely integrated into the dock. You’ll use that Lightning cable and a power block, which does not come in the box, to hook everything together and charge your Apple Watch.

So what exactly are you getting for the $79 you’ll spend on this little dock? Well as far as build quality goes, the dock is weighted pretty nice, at least enough to where it won’t move when removing the Apple Watch. It’s off-white in color and seems to be made from the same material as Apple’s polyurethane iPad Smart Covers with a smooth top side and microfiber cloth lining along the bottom. Given the color and material, it may get dirty after a while, but only time and dirt will tell. 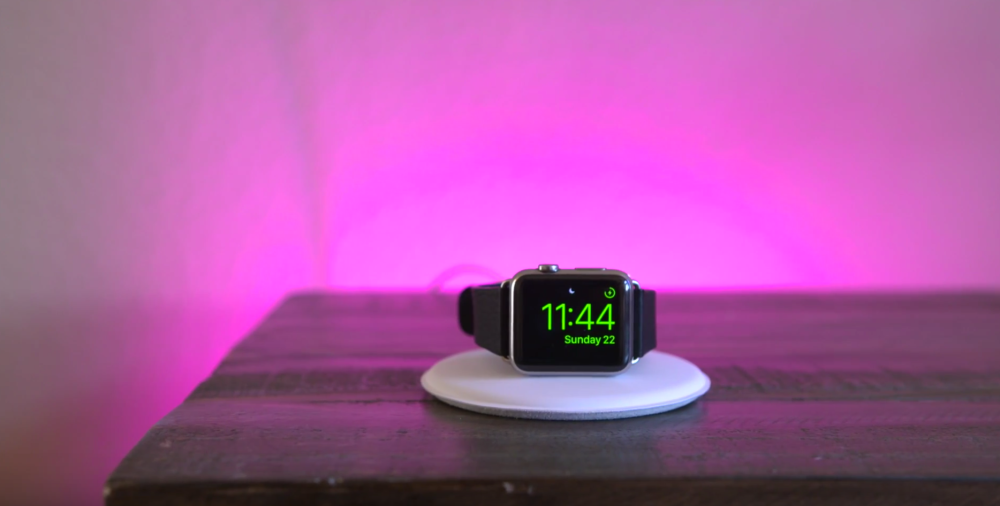 One of the main features with Apple’s official docking solution is the fact that it supports the new Nightstand mode added in watchOS 2. The puck in the center surrounded by a metal ring is supported by a hing that will allow you to lay the Apple Watch flat on its back or stand it up for the ultimate mini alarm clock. It’s easily pushed up through the recessed cutout on the bottom and can be pushed back down with ease as well. There aren’t too many Apple Watch docks out there that have hardware features to support Nightstand mode so if that’s what you’re looking for, this may be a good solution. And thanks to the circular design, it’ll support both open and closed band types and prevent them from scratching from the surface of a table top or nightstand. To me, this doesn’t really look like an Apple product. It’s a very interesting design nonetheless, and doesn’t feel cheap by any means. I wish it was available in other colors as I’d definitely prefer a dark gray or black version.

At the end of the day, it’s yet another quality (and high-priced accessory) from Apple, but I’m not quite sure it’s worth the money. If you’re the type who needs all Apple everything, it’s a no-brainer, but I’d highly recommend checking out some of the other docking solutions available on the market.

On the other hand, if you consider the $29 price of a standalone 2m Lightning cable, the dock itself wouldn’t be horribly expensive if there was a version without it, but unfortunately that’s not an option. At $79, it may be more appealing to $550 and up Apple Watch owners than $350-$400 Apple Watch Sport customers.

There’s really not much else to say here though. It’s a simple dock that pretty much just works, but only if you’re willing to pay up the Apple Tax.