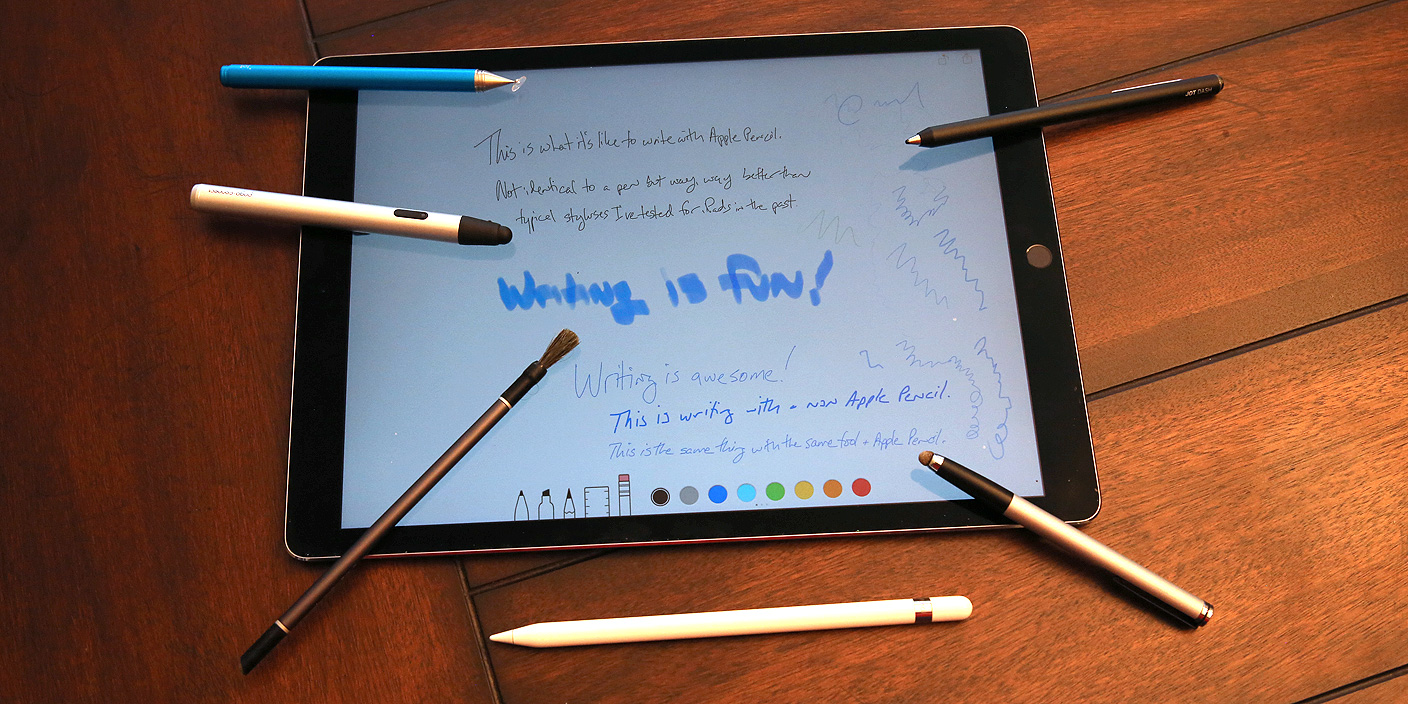 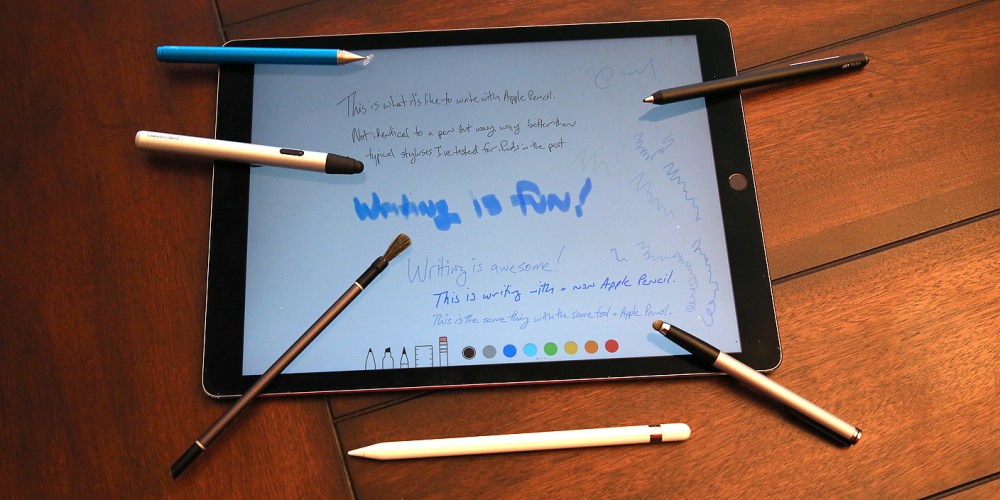 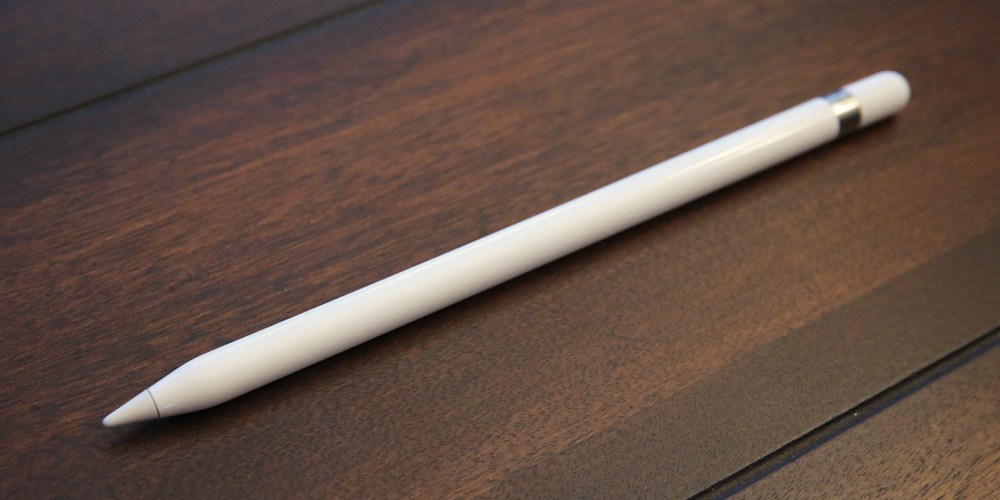 Apple Pencil: Fantastic If You’re Willing to Spend $99, Give Up Buttons, And Recharge Often

Once you’ve used the Apple Pencil, you’ll have no doubt that Apple’s first iPad stylus was worth the (very long) wait. Despite the fact that it’s unapologetically and almost entirely plastic, it’s unusually long and perfectly weighted to feel great in an adult hand, benefitting from excellent palm rejection so you can write or draw naturally as your wrist rests on the iPad’s screen. While including pressure and orientation sensors that help the iPad determine how forcefully and on what angle it’s being used, Apple has completely stripped it of buttons, removing the need to manually power it on. And rather than demanding disposable batteries or a charging cable, it has a hidden Lightning plug that lets it recharge directly from the iPad Pro it’s used with. Even if you (reasonably) question the wisdom of some of Apple’s design decisions, they collectively make the Apple Pencil a dead simple writing and drawing tool to use… assuming it has a battery charge.

The iPad Pro screenshot below shows how writing with the Apple Pencil (in Apple’s Notes app) differs from other styluses. What you can easily see is the tighter, thinner, and more detailed writing Apple Pencil delivers, but less obvious are the added hand comfort delivered by palm rejection, or the impact of pressure sensitivity, which makes some of the Apple Pencil writing look darker or lighter based on the way the stylus was applied to the screen. These features are found in a handful of rival styluses, but rarely supported by third-party apps. 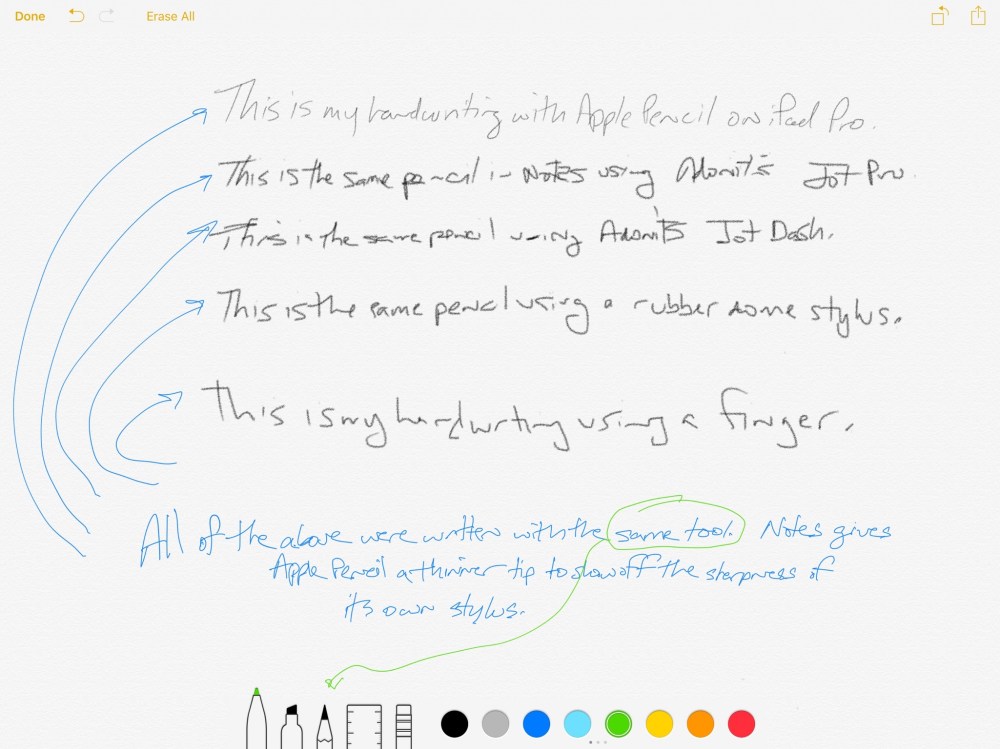 Apart from the price tag, which is higher than almost every other iPad stylus, Apple Pencil’s key limitations are in run time and buttons. Apple promises 12 hours of battery life per charge, which isn’t terrible in concept, but becomes a more serious issue than with other styluses because there’s no way to manually turn the Pencil off. Additionally, the iPad Pro’s Bluetooth remains on to maintain communication with the Pencil, modestly impacting its battery life as well. Add to that the Pencil’s lack of control buttons — say, an undo or eraser button — and it’s clear that Apple has left room for improvement in a future sequel.

If you want to skip the Apple Pencil, there are four broad categories of iPad stylus alternatives out there, differentiated by two factors: the presence/lack of a fine-point electric writing tip, and the presence/lack of Bluetooth support. Some styluses have both a fine-point electric tip and Bluetooth, while others have one feature or the other, and many have neither. Here’s how the Apple Pencil compares to each category. 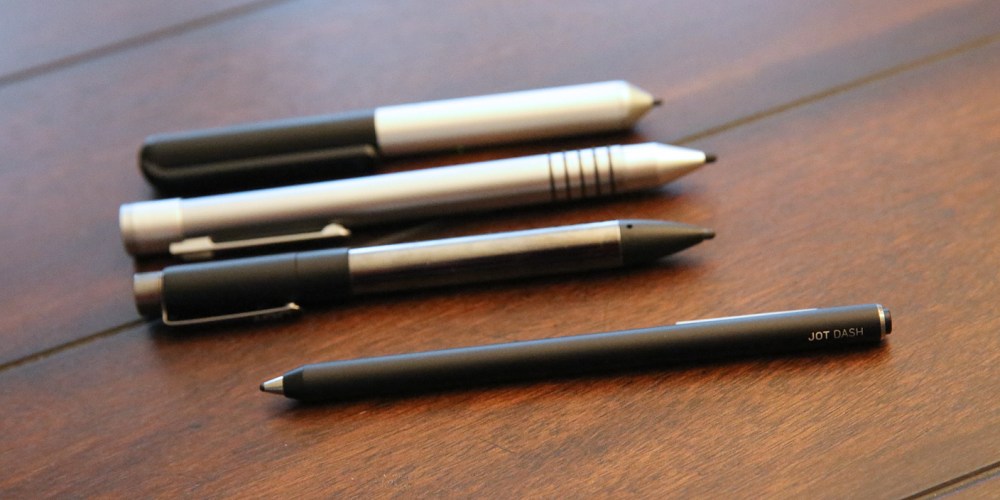 Shorter by an inch but otherwise wonderfully designed, Adonit’s Jot Dash ($40-$50, shown above in gunmetal) can be had for under half the price of the Apple Pencil, and is easy to recommend as an alternative for earlier iPads. Made from anodized aluminum and built with a shirt clip, Jot Dash has an electronically-powered 1.9mm fine tip and a very subtle but wonderfully implemented button — on the back, in the same place as the retracting mechanism of a ballpoint pen, you can press down to turn Dash on or off, conserving its battery. So while it promises 14 hours of run time, those hours don’t evaporate while Dash is actually sitting unused, which happens with Apple Pencil. Dash also includes a magnetic USB recharging base, and works with multiple iPads, through it seems to have some sensitivity issues with the iPad Pro.

In real world use, Jot Dash has three primary disadvantages relative to Apple Pencil. First, it doesn’t have palm rejection, which in most cases means that you’ll need to hover your hand over the screen to write with it. Second, while Dash’s tip can be precise when writing on screen, Apple’s Notes app cheats a little, automatically giving Pencil a thinner version of whatever pencil or pen other styluses are using. That makes Pencil’s output look crisper — a difference Apple might attribute to increased pixel-level confidence in Pencil’s location compared with other styluses. (In other apps, the results of Dash and Apple Pencil look far more similar.) Third, Dash doesn’t use Bluetooth, and so can’t share pressure sensitivity or orientation data with the iPad. As more developers start to support these features in the Apple Pencil, the gulf between Pencil and rivals will grow.

Jot Dash is noteworthy because it’s so small and wonderfully designed, but there are a bunch of other capacitive non-Bluetooth styluses out there. The Joy Factory’s AAAA-batteried Pinpoint ($30) and rechargeable Pinpoint X1 ($50) work with pre-iPad Air 2 models, while Lynktec’s Apex Rechargeable ($55) is a little larger, but works with all iPads, and is micro-USB rechargeable. Just Mobile’s AluPen Digital ($49) has one of the nicest designs but is quite thick to accommodate a AAA battery. Overall, I’d pick Jot Dash as the winner in this batch, but you may prefer the design of another option. 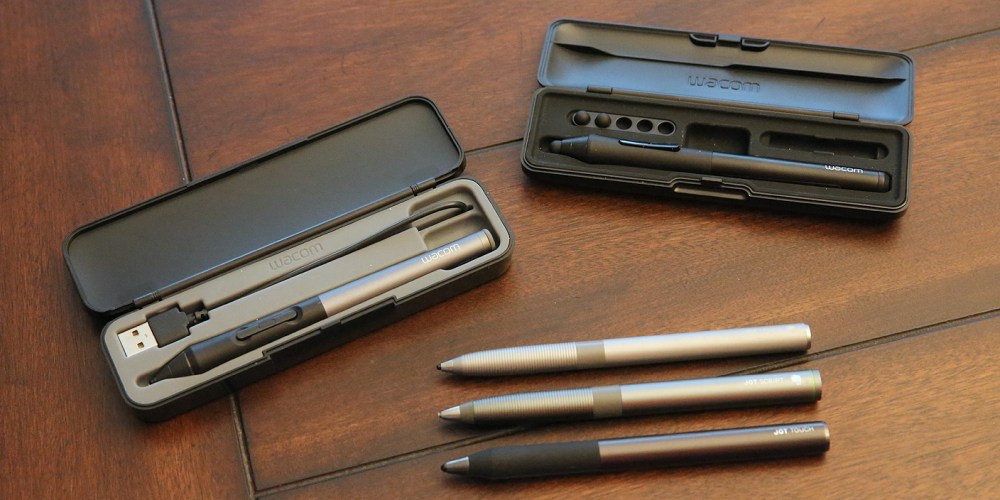 Several of Apple Pencil’s super powers are attributable to its use of Bluetooth hardware, which enables the stylus to wirelessly communicate tip pressure and angle data directly to the iPad Pro. Thus far, this data can be used to make writing look light, medium, or dark depending on how hard you’re pressing, or make thicker pen strokes, or simulate how the edge of a drawing tool adds thicker bars of color when raking across a surface. Apple Pencil isn’t the first iPad stylus to offer these features, but earlier rivals had to lobby third-party developers to support their tools, individually. App support barely materialized for third-party styluses, an issue the Apple Pencil certainly won’t have to worry about.

Perhaps the best-known of the electric-tipped Bluetooth styluses is Wacom’s Intuos Creative Stylus 2 ($61, shown in silver above), sequel to the earlier, rubber-tipped Intuos Creative Stylus ($17-$22, shown in black). Both Creative Styluses make a great first impression as they arrive in hard plastic boxes with replacement tips and power accessories, sporting pressure sensitive tips, side shortcut buttons, and the promise of palm rejection support in software. Stylus 2 added a micro-USB 22-hour rechargeable battery and finer tip to the original model. Unfortunately, less than 20 apps were compatible with each of the new Styluses, and some only supported one or two of the Bluetooth-enabled features.

Adonit’s Jot Script ($35) and Jot Script 2 ($65) start with the 1.9mm capacitive tip of Jot Dash, but add Bluetooth 4 support to provide tip angle and palm rejection-assisting location data. Script is AAA-powered; Script 2 has a 20-hour rechargeable battery. The hitches are that the palm rejection and angle features are only supported by a handful of apps, and many people have found the palm rejection to be of limited value — in my testing, it’s certainly not as good as the Apple Pencil’s, and in most cases, not close. Adonit also makes a step-up model called Jot Touch with Pixelpoint ($75-80) that includes a 3.18mm capacitive, pressure-sensitive tip and two shortcut buttons. These features are compatible with a few apps — not enough to justify the expenditure, in my view, and Jot Touch doesn’t work properly with the iPad Air 2. 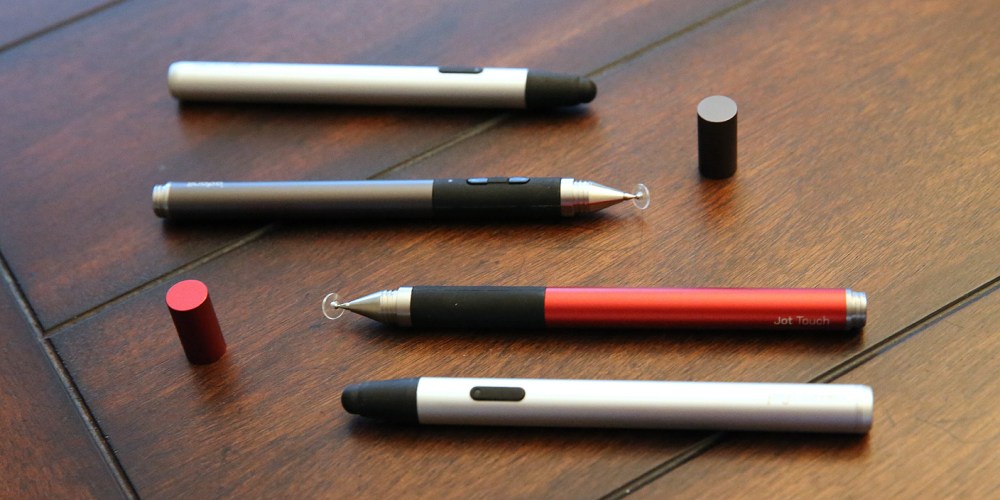 Perhaps the best known examples of Bluetooth styluses with non-electric tips are Ten One Design’s Pogo Connect 2 ($40) and Adonit’s Jot Touch 4 ($60). Both are sequels to earlier Bluetooth styluses, sporting data-driven features: Pogo Connect 2 includes pressure sensitivity, palm rejection, and a location beacon to help you find it if it gets lost. The software features all depend on third-party app support, which with just over 50 apps (albeit with varying levels of feature support) is stronger for Pogo than most Bluetooth styluses. Jot Touch 4 debuted as a palm-rejecting, pressure-sensitive, and twin shortcut button-laden version of Jot Pro (discussed below), but has vanished from Adonit’s site. It promised that nearly 20 apps would support the stylus, but compatibility status is presently unclear. Pogo Connect 2 is clearly the better pick overall. 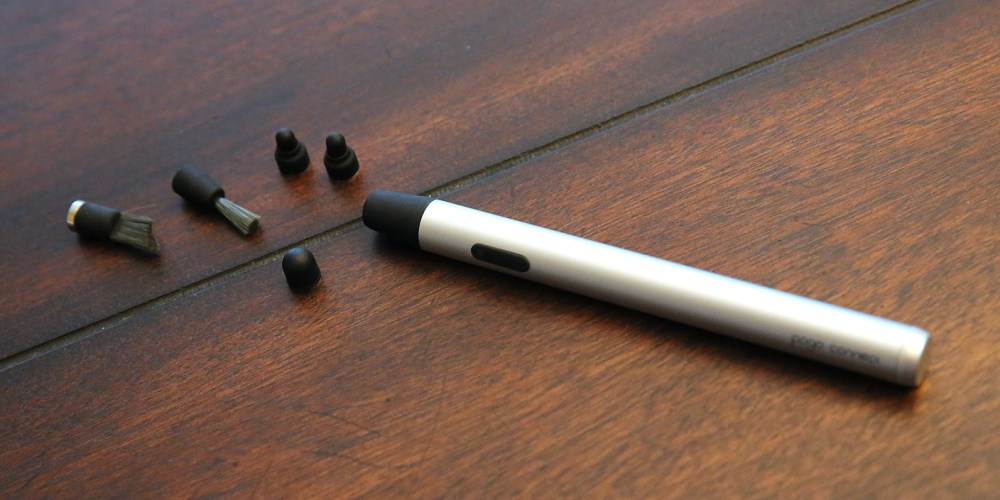 Pogo Connect’s other special feature: it actually supports replaceable magnetic tips, including finer-point rubber nubs and paintbrush tops, all of which are sold separately. It’s going to be interesting to see whether Apple “borrows” this feature for the Apple Pencil in the future. 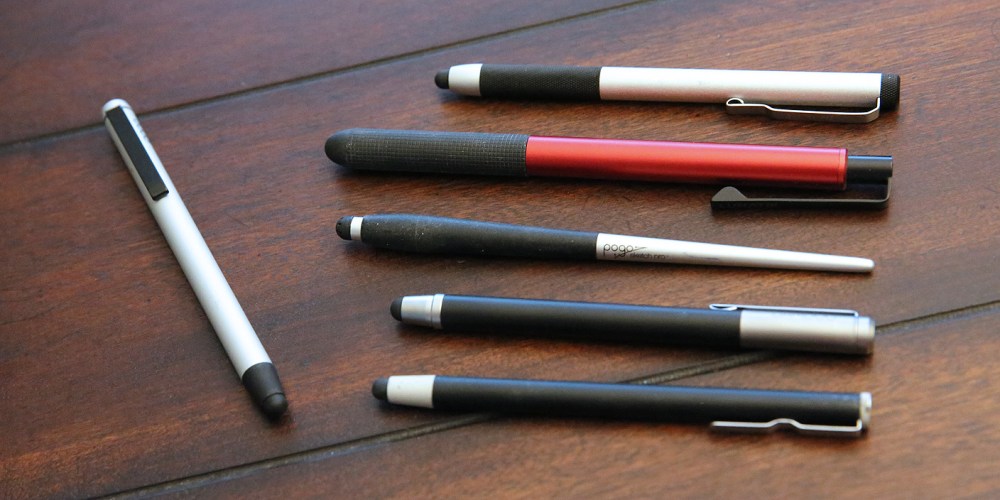 The easiest sort of stylus to make is one with a non-electric tip and no Bluetooth functionality; almost always rubber-domed, these styluses have been flooding the market for years. Their major differentiators are the material used for the shaft of the stylus (typically metal, sometimes plastic), whether or not they have a shirt clip (most don’t), and their length (most vary from around 3″ to 5″). In terms of accuracy, you might as well be using your finger to write or draw with one of these, but if you use your iPad with gloves on in cold weather, or prefer to hold something rather than using your fingertip, these aren’t terrible options. They are also compatible with all iPad apps, and all iPad models, with no restrictions; the iPad treats them just like fingers. 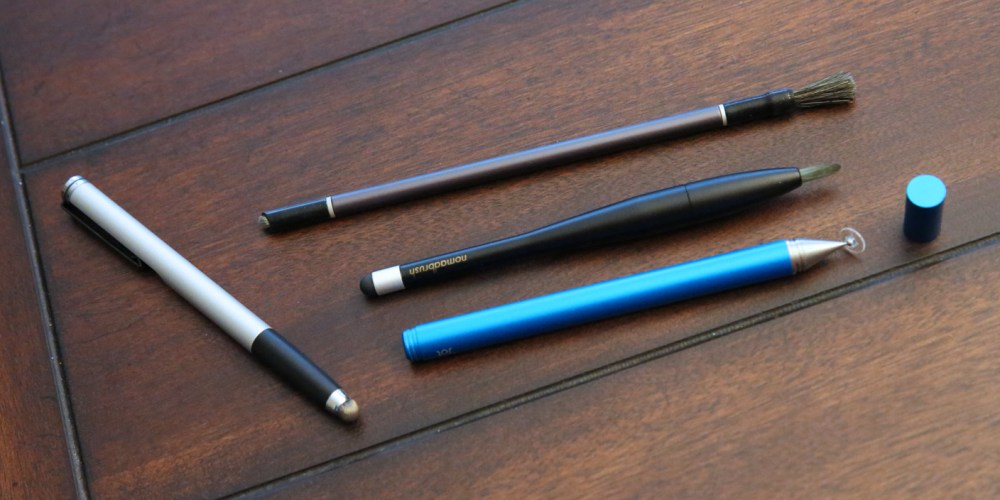 Lynktec’s TruGlide Pro ($15) is the rare stylus of this sort with a mesh rather than rubber tip; it doesn’t wear down as fast, but requires a little extra pressure. Nomad Brush’s FleX ($30) and Compose ($32) are even rarer variants, with capacitive synthetic paintbrush heads that can be used in painting apps; FleX has one head, Compose two, while a Mini 2 ($34) version has a retractable brush on one end and a dome on the other. The other standout is Adonit’s Jot Pro ($22-$30, color-dependent), which uses a special pivoting hard plastic and metal tip rather than a rubber dome; some people love (and continue to rave about) the accuracy of this tip, but I’ve never been a huge fan. 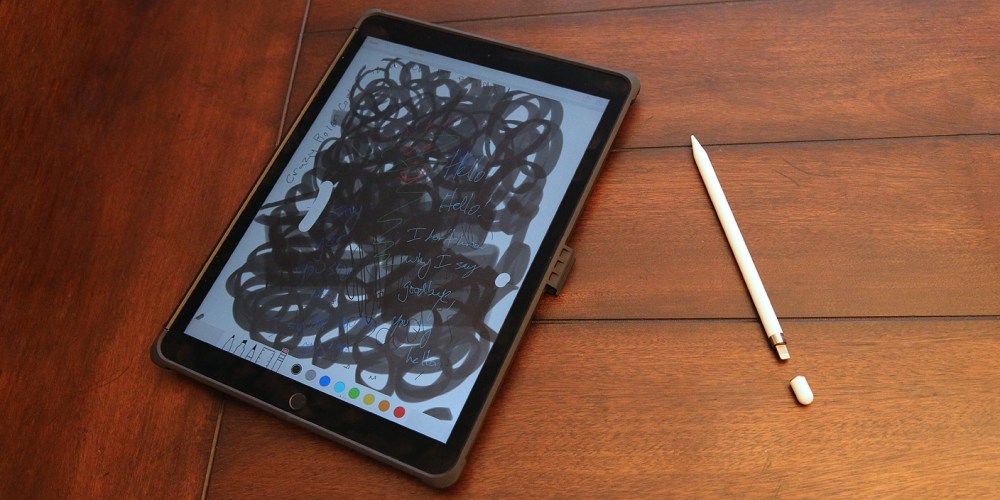 Thanks to the Apple Pencil’s release — and its complete incompatibility with all iPad models besides the iPad Pro — the stylus market will be changing over the next couple of years. If you have an iPad Pro and are thinking of getting a stylus, don’t hesitate to (try and) get the Apple Pencil; it delivers the best overall experience, even though it’s certainly not cheap, and presently difficult to find in stores.

For non-Pro iPads, my personal suggestions would be Adonit’s Jot Dash if palm rejection and pressure sensitivity aren’t important to you, Ten One Design’s Pogo Connect 2 if you need those features (with respectable app support), or a more basic non-powered stylus such as Jot Pro if you need the slightly improved writing precision you’d get from holding a pen-like tool. Their prices are all reasonable at this point, so you’ll certainly get your money’s worth from any stylus you use while the dust from Apple Pencil is settling.

Apple's third-generation iPad Pro, which launched in November of 2018, features an all-screen display, with minimal bezels and no Home button.