Yesterday, Apple released the first beta of iOS 9.3 and with it comes a new feature called Night Shift. Apple says that Night Shift uses your iOS device’s location and clock to automatically adjust the colors in your display, making them warmer and easier on the eyes at nighttime. In the end, Apple says this should make it easier to fall asleep as the bright blue light normally emitted from a display has been found to disrupt your circadian rhythms, making it harder to sleep. While Apple has solved this feature on iOS, it remains an issue on OS X…

Despite Apple touting it as so, Night Shift is not necessarily a new feature. Popular third-party app Flux (or f.lux) has offered this feature for some time now, but only briefly was the app available for iOS. Late last year, Flux was made available for iOS via side loading with Xcode, but not through the App Store as to not break Apple’s policies. A day later, however, Flux for iOS was removed from the developer’s website at the request of Apple. Nevertheless, Flux for Mac remains available and it’s incredibly easy to set up.

Flux on Mac does essentially the same thing as what Night Shift does on iOS. Flux determines your location and when the sun starts to set, it changes the colors of your display to be more conducive to a setting without natural lighting.

First, you’ll want to head to Flux’s website. From there, you can download the application for free. Then, you can open the Flux app just like you would any other OS X application. The first time you open it, Flux should ask you to share your location with it. This is important because it allows the app to track what time the sun will rise and set in your area. If for some reason Flux doesn’t ask for your location on launch, there’s a field in the preferences window of the app to enter your location. 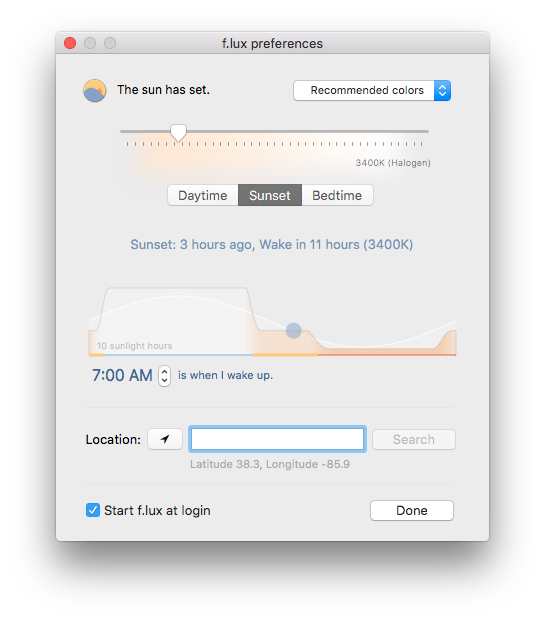 Once it knows your location, Flux will automatically adjust the temperature of your screen. If it’s past sunset, it by default will adjust the warmth to 3400K. You can adjust this number, however, by dragging the setting at the top of the preferences window to your desired temperature.

During the daytime, Flux sets your display to 6500K, which is the default setting of your Mac. Likewise, you can customize this by dragging the slider at the top of the window. Finally, there’s a bedtime mode that sets the display warmth to 1900K, which is meant to be used in dark rooms. 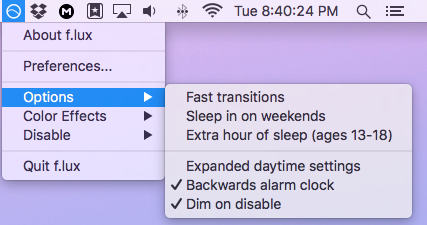 Because there is a considerable shock to switching between sunrise and sunset modes, Flux will gradually change the temperature of your display instead of instantly changing it. If, however, you’d like fast transitions between modes, you can enable this feature by clicking on the Flux icon in the menu bar, mousing over “Options” and choosing the “Fast transitions” setting.

From the same menu, you can set it to add an extra hour of sleep, which starts the bedtime mode one hour earlier. You can also enable warmer daytime settings for those who want to reduce eyestrain or match office lighting. There’s also a weekend mode that gives brighter light late on Friday and Saturday.

The Color Effects menu has a few more options. These options include a darkroom setting, a movie mode, and a setting to automatically enable OS X’s built-in dark theme at sunset each night.

Flux for Mac is available as a free download here. With the announcement of Night Shift for iOS, it might become more common knowledge that staring at your device screens could have a real effect on your sleeping schedule. Flux aims to solve that issue on Mac and it does a great job of it.