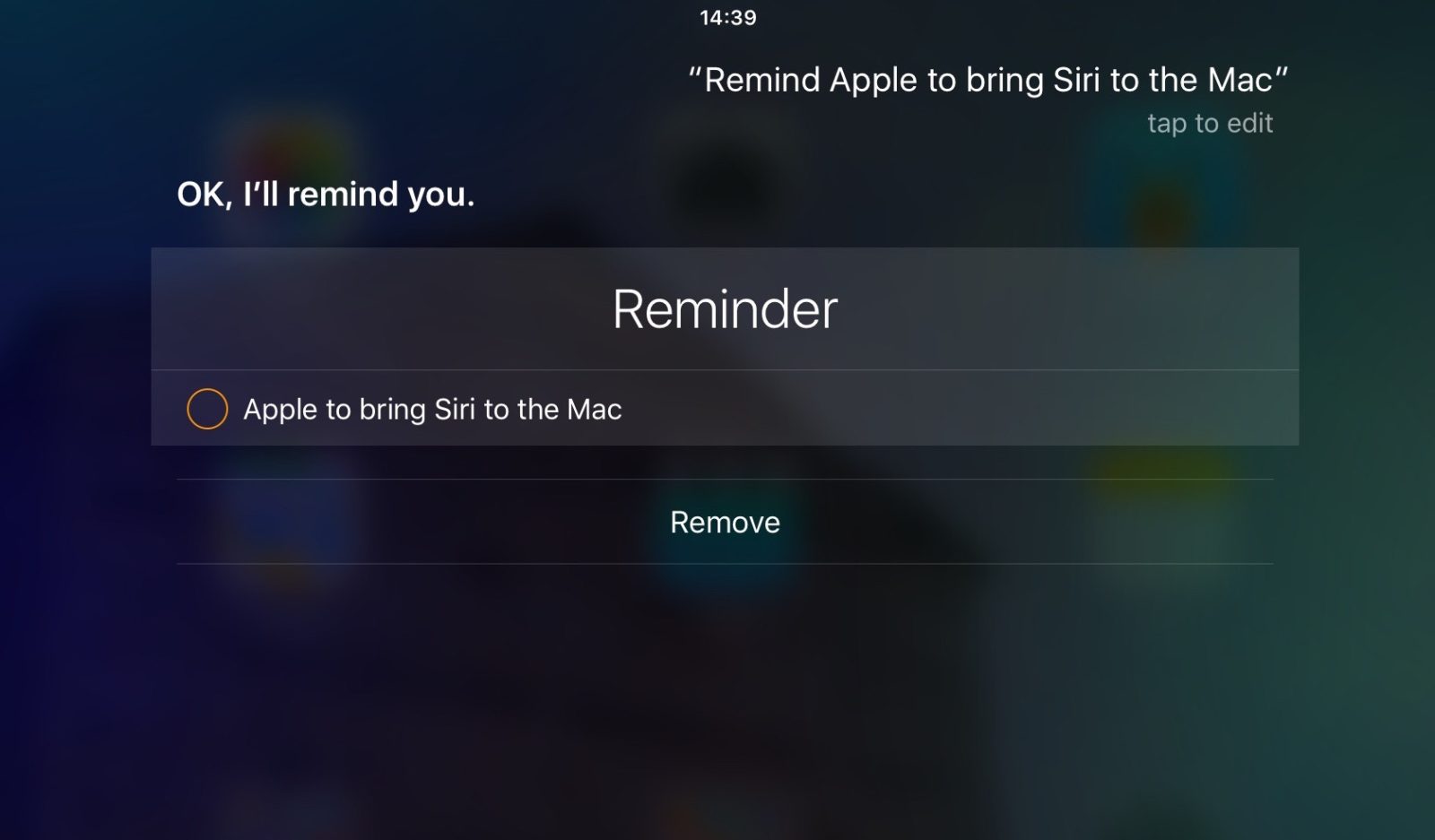 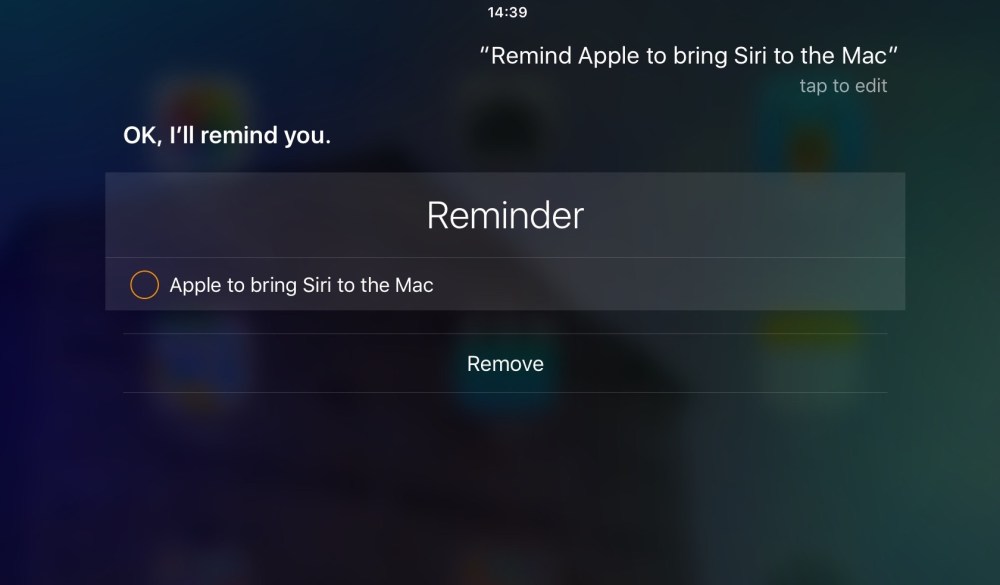 Siri percolated throughout all of Apple’s platforms in 2015. It started with iPhone in 2011, iPad in 2012, debuted on Apple Watch in early 2015 and Apple TV with the new model a few months ago. It’s quickly becoming a premier feature on these platforms, with live-as-you-speak transcription and radically new features like ‘Remind me about this’ contextual tasks when inside apps. Except for one platform of course. Mac OS X has been ignored and left abandoned with regards to true voice searching and Siri. It’s 2016, and I want Apple to bring Siri to the Mac.

Especially with Apple Watch, it’s just become natural for me to ask for stuff with my voice. For little things like timers or messages, I like to speak. Siri voice recognition has got significantly better for me in the last year, I have come to rely on it. And not having it available when I’m working on my Mac is a huge pain.

There is the potential for Apple to make Siri on Mac even more powerful than a straight iOS port too. You could create more complicated actions for Siri to execute, in a world with multiple apps. ‘Open apple.com and a text editor side by side’ would be a cool command to quickly set up a workspace desktop, for example. Opportunities to integrate with the Mac features of Spotlight also exist, such as finding files using natural language queries as introduced with OS X El Capitan.

The Mac may also be a nice testbed for third-party app integrations with Siri, given the more flexible environment. I’m not hoping or expecting for this more advanced stuff. Simply reproducing the Siri from my iPhone on my MacBook would satisfy me. 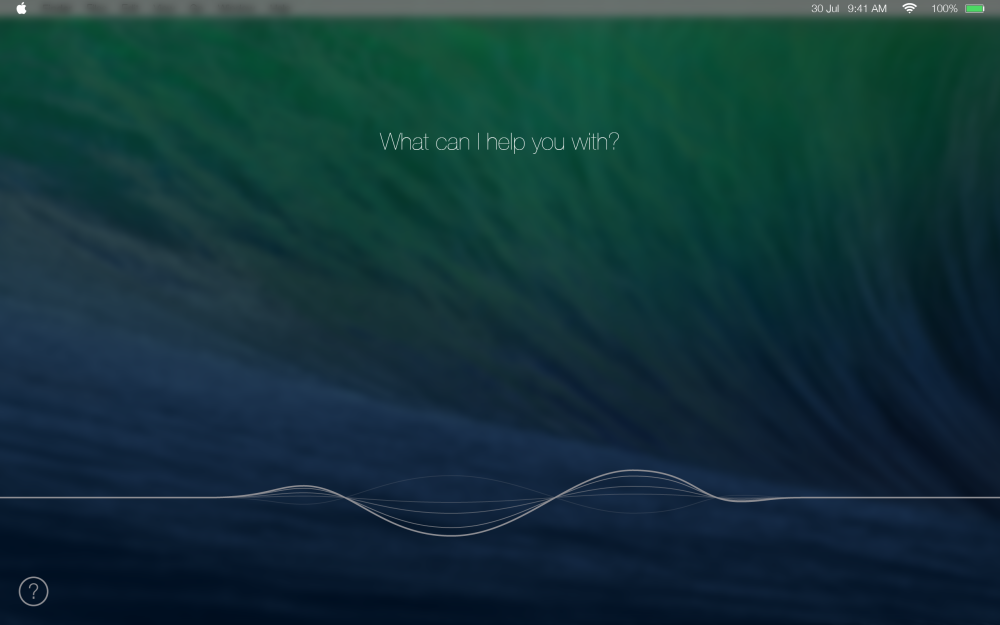 In terms of user interface, it seems like a simple problem. Just like the iPad, present a full screen overlay with the Siri conversation in the middle of the screen. 9to5Mac reported Apple was developing Siri for Mac in this manner for early internal versions of OS X Mavericks, but obviously it didn’t get released. On iOS, Siri is activated with a long press of the Home Button. The Mac doesn’t have an obvious primary button, but it could implement an activation by a long-press of the fn key or similar. Apple could even expose an app wrapper for it, so avid users could drag a Siri icon into their dock.

When thinking about why Apple hasn’t done something, it’s worth considering their motivations for intentionally not doing so. It is possible that talking to your computer is a weird concept to grasp. It’s true that talking to a phone is a lot more natural as the microphone is close to your face. Even on Watch, it’s easier with a quick raise of the arm.

Moreover, the Mac microphone is potentially further away from your mouth when you speak. Unless you use a headset, it will be more difficult for Siri to be able to hear you which could impact performance and recognition. However, Apple has opted to include a Dictation feature across the system. Press the fn key twice in any text box and it will dutifully transcribe your speech into text. The accuracy is pretty good too. I believe newer Macs include directed miss for better input too, to further combat this issue.

Initially, you could argue that Siri was a hallmark feature of the iPhone and that Apple wanted to keep it exclusive to encourage people to buy iPhones. This line of thinking would be somewhat reasonable in late 2011 but now its pervasive everywhere on the iOS side. It doesn’t feel exclusive anymore. In fact it feels like a necessity, a voice assistant is practically a core feature of modern operating systems these days. And OS X is worse by not having it.

At least from my perspective, the reason Siri on the Mac hasn’t happened is because Apple hasn’t gotten around to finishing it for a public release. There have been other priorities for engineering resources to tackle. Siri is one of the few big features (Control Center is another, but even that is more recent) that the Mac still misses out in comparison to its iOS/tvOS/watchOS siblings. Perhaps 2016 is the year Apple will find the development resources to bring Siri to OS X, as the platform seems to have reached a level of system stability and feature maturity.

What do you think? Are you itching to see Siri on the Mac? Let us know in the comments below.