Apple just released its Q1 2016 earnings, reporting “record” results of $75.9 billion in revenue and $18.4 billion in profit. In addition to its normal data, however, Apple has shared a new figure relating to the number of active devices it has in the wild. Apple says that it now has an active installed base of 1 billion devices, including iPhone, iPad, Mac, iPod touch, Apple TV, and Apple Watch. Apple says it gathered this data by tracking the devices that have been engaged with its services within the last 90 days.

“The growth of our Services business accelerated during the quarter to produce record results, and our installed base recently crossed a major milestone of one billion active devices,” Tim Cook said regarding the growth of the company’s active installed base.

During its Q1 2015 earnings report last year, Apple announced that it had sold its 1 billionth iOS device, so for it to now have over 1 billion active devices is a huge milestone for the company. During the company’s earnings call, Apple CFO Luca Maestri said that Apple has seen year over year growth of “over 25 percent” for its active installed base. Speaking to Financial Times, Maestri explained that he believes Apple’s services business is not valued correctly in the grand scheme of things, especially with 1 billion active devices having immediate access to things like the App Store and iTunes:

“We have a huge number of devices actively engaged with our services and that number is growing very fast,” Maestri said. “If you think about it in the context of how [other] internet services businesses are valued, it seems very clear to us that our services business is not valued correctly.”

Apple’s Q1 2016 earnings call is about to kick-off and you can follow along in our live blog for all the important details. 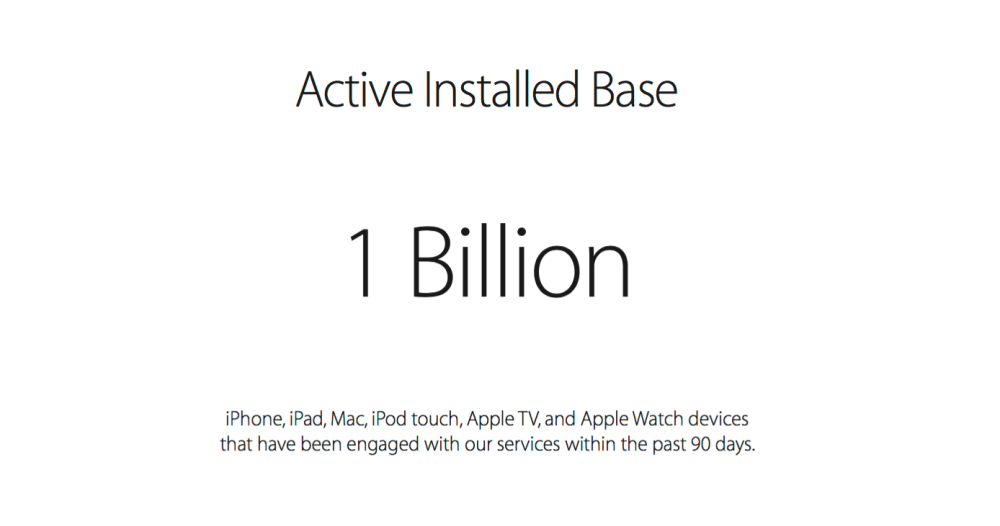