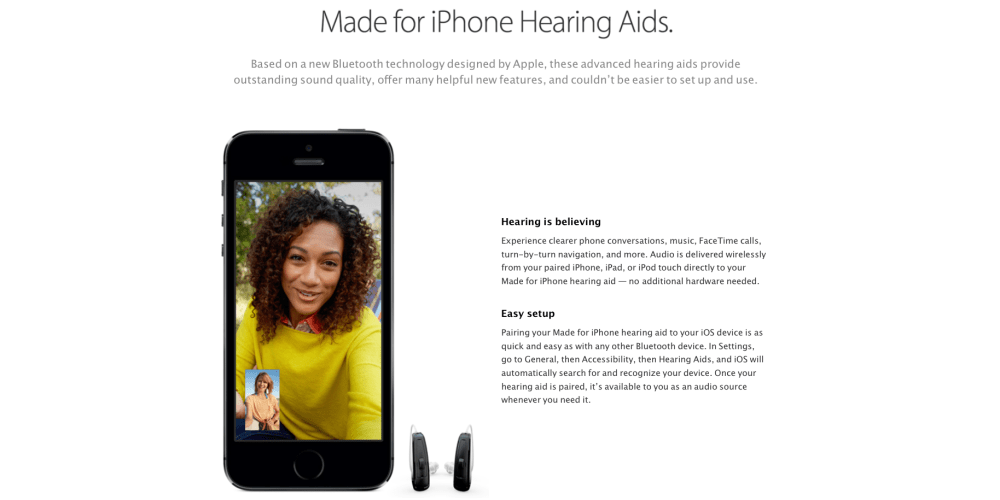 Apple recently has filed a new document with the Federal Communications Commission in which it argues that Made for iPhone, or MFi, accessories should be acknowledged by the organization as alternatives for hearing aid compatibility compliance. Recently, the FCC has proposed that all phones and consumer wireless devices must be compatible with hearing aids.

In response to the new proposal from the FCC, Apple says that all products that fall under its MFi hearing aid standards already comply with the FCC’s hearing aid compliance regulations. Apple argues that Made for iPhone hearing aids are already available to consumers everywhere, thus making them a valid alternative to the hearing aid compatibility requirement (via MacReports).

In its FCC filing, Apple touts that its MFi hearing aid platform offers a better experience than traditional hearing aids, while noting that recognizing the platform as an alternative to the hearing aid compatibility requirement would further the development of new and improved ways to better  handset accessibility:

Apple is driven to make its devices truly accessible, and believes that consumers with hearing loss deserve a better experience than what traditional hearing aid compatibility technologies offer today. iPhones comply with existing HAC rules. But as the Commission has recognized, Apple has also invested heavily to improve accessibility by developing a new hearing aid platform that relies on Bluetooth® technology.

Apple believes that this Made for iPhone (“MFi”) hearing aid platform represents a substantial improvement to consumers over devices that are deemed accessible by today’s HAC rules. In order to encourage innovators to develop new and better ways to improve handset accessibility, the Commission’s rules should recognize solutions such as the MFi hearing aid platform as alternatives for hearing aid compatibility compliance.

Finally, Apple notes that the FCC should focus in the future on “qualitative assessments” rather than its current interface-based assessments to “create meaningful solutions.” You can read the full FCC filling from Apple here.