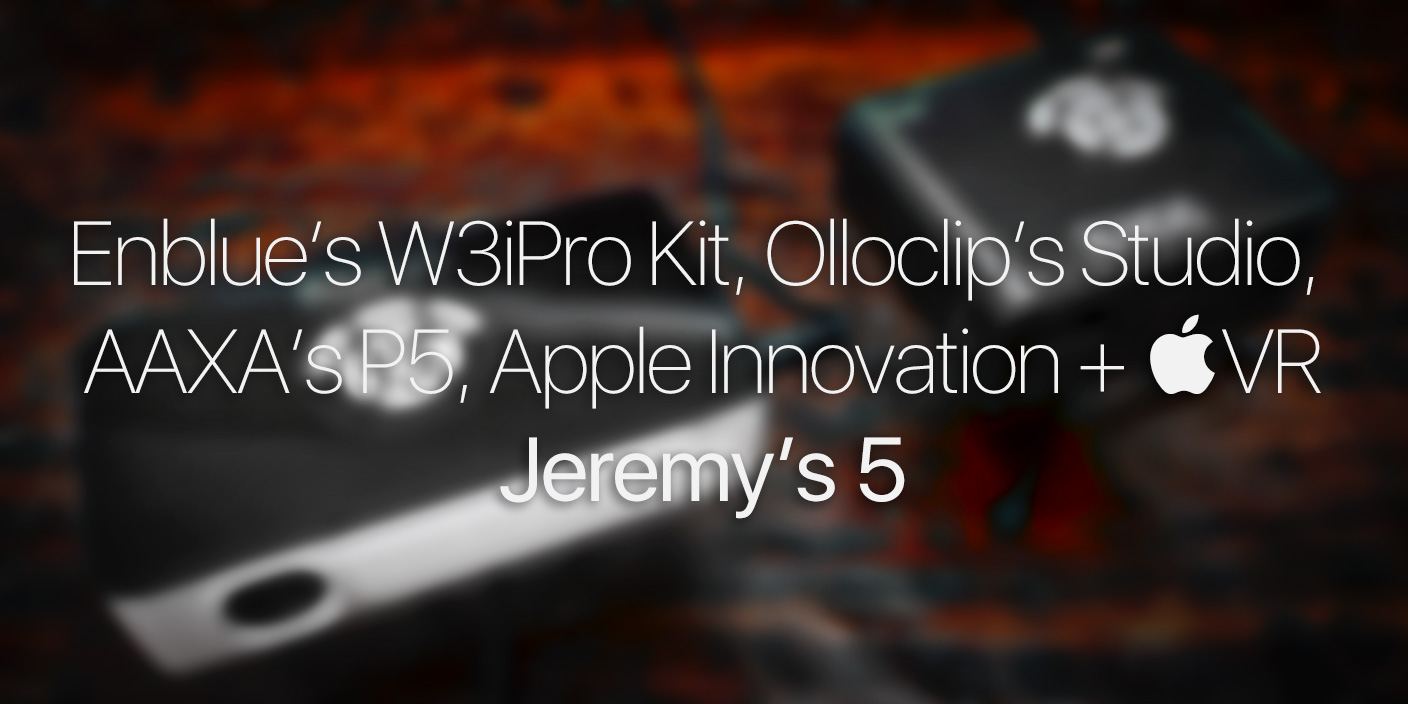 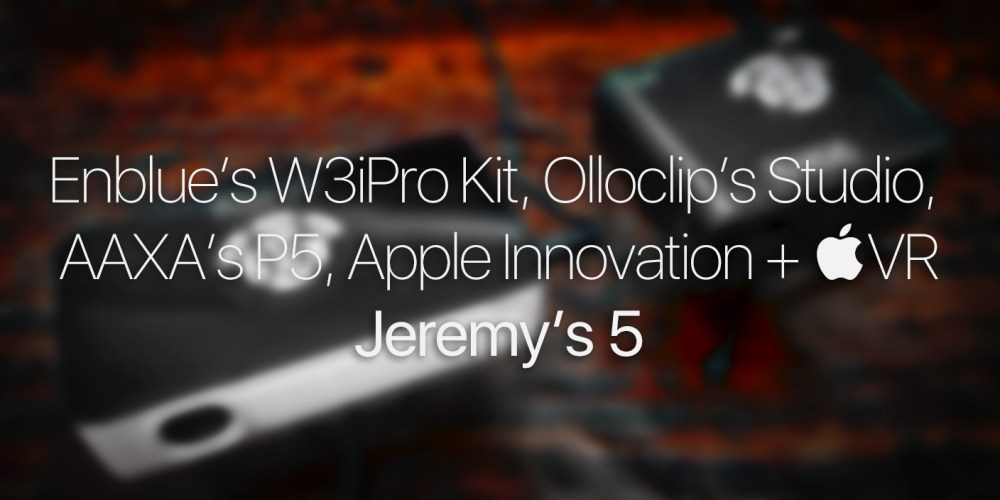 Welcome to the latest edition of Jeremy’s 5, my latest roundup of 5 interesting little things that aren’t big enough for full articles, but are still worth sharing with you.

This week, I’m looking at Enblue’s iPad Pro upgrade kit for an excellent multi-device dock, Olloclip’s Studio accessory bundle for iPhone photographers, AAXA’s P5 video projector, Apple innovation/execution in 2016, and the likelihood of an Apple virtual reality solution in the near future…

1. Enblue’s W3iPro Upgrade Stability Kit for iPad Pro. Last August, I reviewed and loved the iPad, iPhone, and Apple Watch dock Premium One W3. To increase W3’s appeal to iPad Pro owners, developer Enblue has come up with a $49 glass base that attaches to the bottom of the W3, primarily “to increase the stability.” I’ve been testing the W3iPro Kit over the last week, and although I would certainly not call it necessary for the iPad Pro, it’s nice. 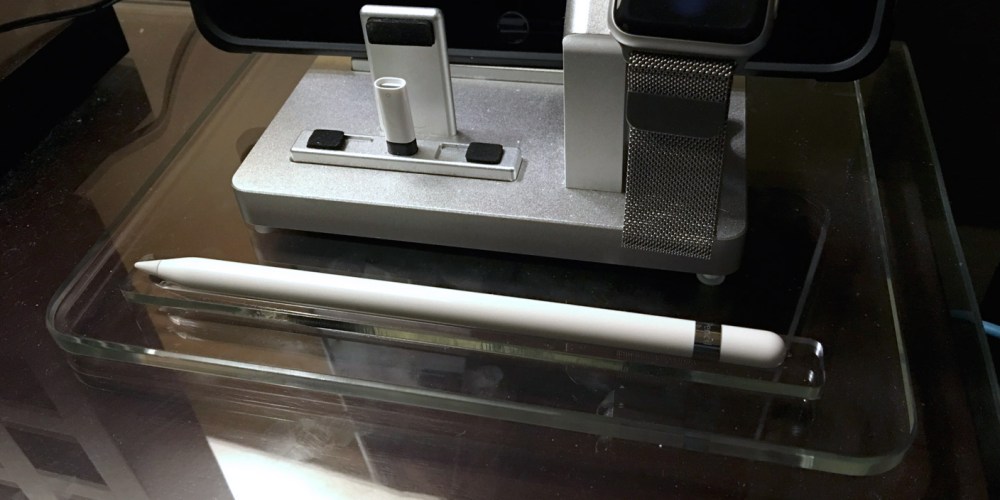 Measuring 9.05″ by 7.08″ by 0.31″, it includes an acrylic recess in the front to hold an Apple Pencil, screws to attach the glass to the W3 base, and a larger rear support bar for the iPad Pro. I happen to use my W3 on a glass-covered nightstand, where it blends in even more than it might with other surfaces. It feels solid, looks nice, and adds a little more stability to the W3, though if you use the microsuction tape on W3’s bottom, the base unit is totally safe with even the large iPad Pro. Consider the W3iPro Kit largely for the cosmetics and Apple Pencil holder. 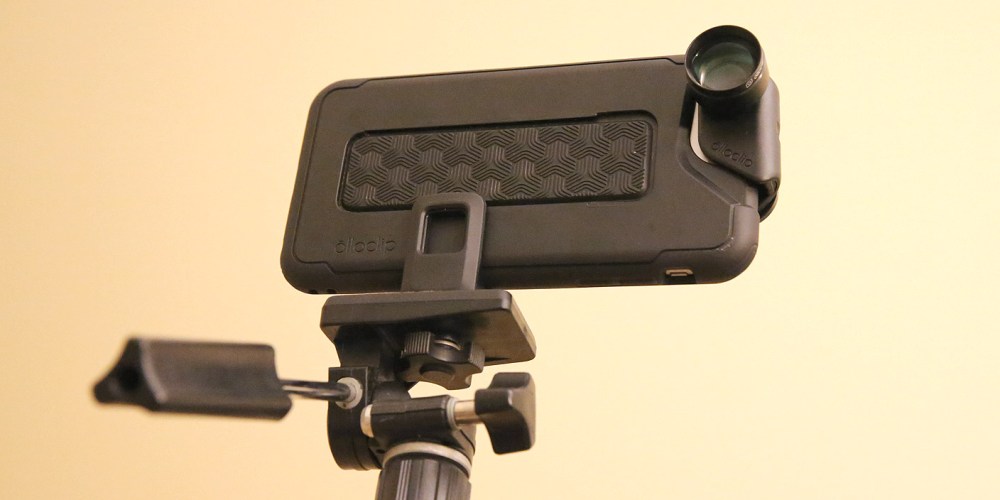 2. Olloclip’s Studio for iPhone 6/6 Plus/6s/6s Plus. Earlier this month, I wrote about the CES debut of Olloclip’s Studio ($90) — a brand new iPhone case bundled with a collection of camera accessories. I’ve had one in hand for a few days, and as a photographer, I like it, though I’m anxious to see Olloclip expand its own camera accessory collection to make Studio as powerful as possible. Olloclip already makes iPhone lens attachments, which work perfectly with Studio; now it could and probably should get into selling LED lamps and tripods, as well. 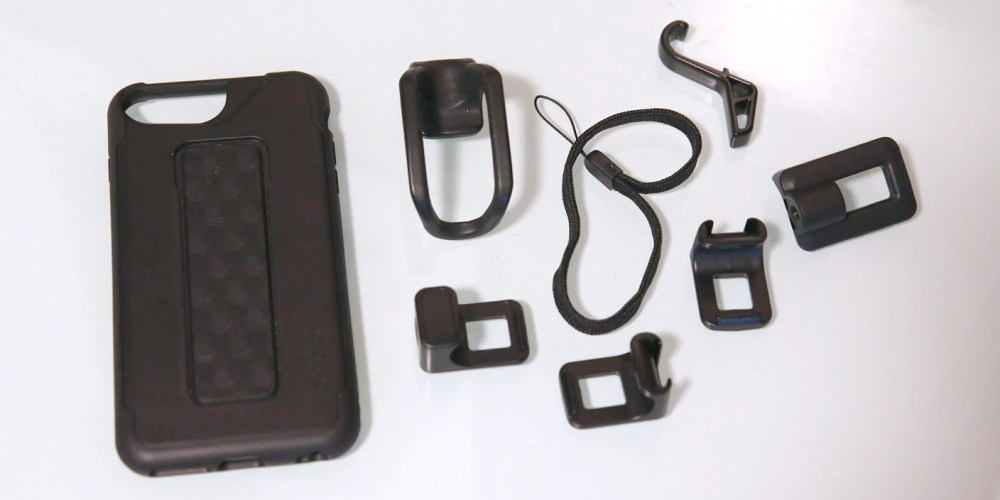 Studio begins with Olloclip’s latest iPhone case in your choice of 6/6s or 6 Plus/6s Plus sizes. It’s clearly the very best case Olloclip has ever made, with ease-of-use and protection that are nearly up to par with a Speck CandyShell. The package also includes a nicely designed, useful finger/hand stabilizer grip, a so-so kickstand, easy-to-use vertical and horizontal tripod thread attachments, a basic wriststrap, and two coldshoe adapters that conceivably would let you mount a self-powered external LED fill-in lamp or flash system. Each of the accessories slides effortlessly onto a rear rail system to securely attach to the case, and you can use at least two at a time. 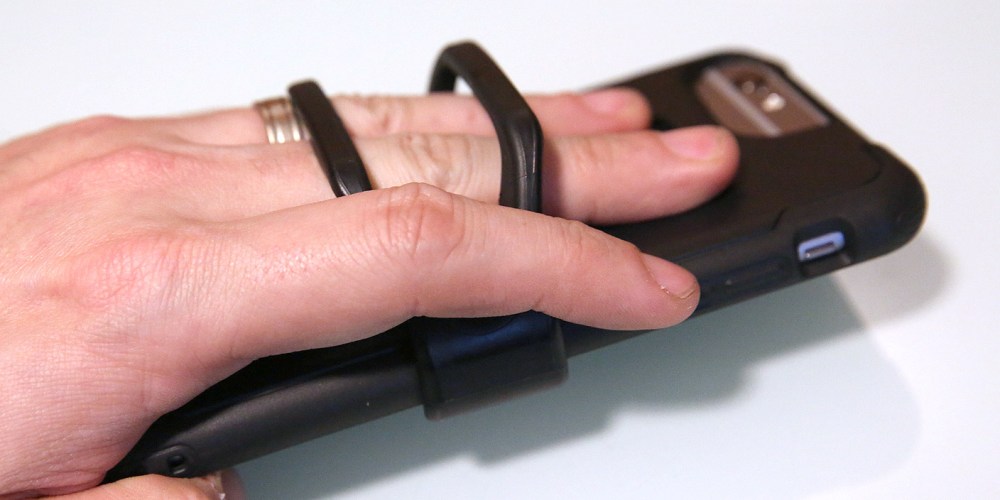 I would call Studio a no-brainer if you want to use your iPhone often with a tripod or existing coldshoe accessory — it makes attachment and detachment of these common camera accessories as seamless as adding or removing an Olloclip lens. The fact that you don’t have to compromise on iPhone case quality or coverage when adding these accessories is fantastic, as well. But if you don’t already have a compatible lighting accessory or tripod, you might find the $90 entry price for the case to be steep; you can get Olloclip’s last-gen lens-ready case for only $30. I’m optimistic that Studio will grow in value over time: Olloclip has done a great job of building out its past accessory options, and I expect that Studio will be well-supported as well. 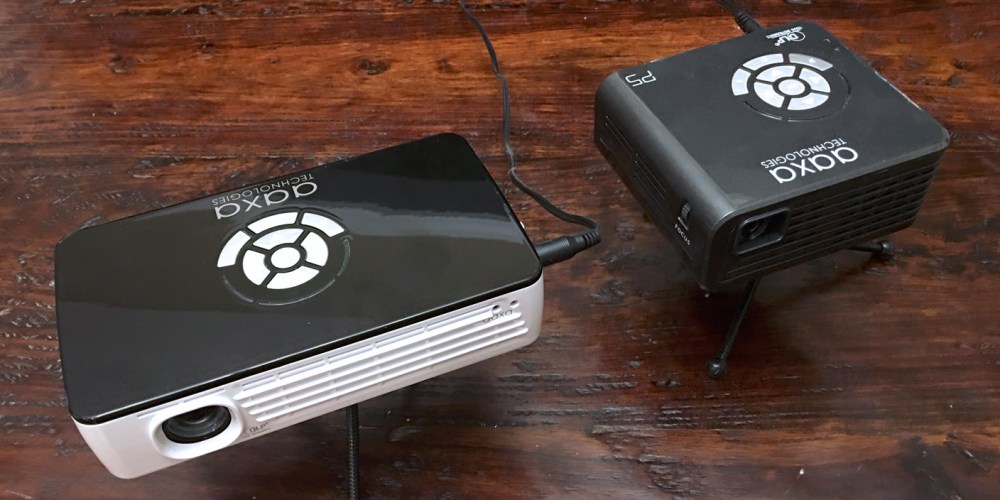 3. AAXA’s P5. Last year, I had the opportunity to review two different AAXA pico video projectors — the $300 ST200 and the $450 P700 — both of which were decidedly more impressive at creating large, high-resolution video projections than smaller pocket-sized projectors such as Sony’s MP-CL1. This month, AAXA is shipping P5 ($400 MSRP, $352 online), a tweener model that offers twice the ST200’s power for only a small price premium. It’s a thick rounded-off square shape that occupies around 2/3 the physical volume of P700, a size that I’d call convenient but not hugely more convenient than P700. (The photo above makes it look comparatively smaller than it actually is.) 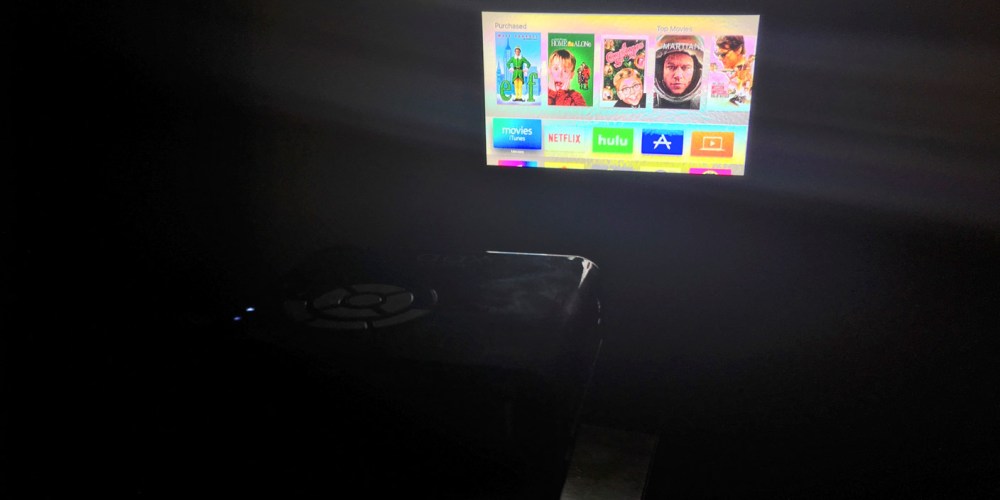 The P5 has a 300 Lumen DLP projector inside (twice the ST200’s brightness and a little under half the P700’s) while otherwise offering highly similar specs to the P700. P5’s native resolution is 1280×720, with two hours of promised battery life, now with the ability to easily swap batteries for extended play times. AAXA has kept the ports, controls, and menus highly similar, notably including a manual focus knob, keystoning and volume buttons, and a full-sized HDMI input. You give up a bit of speaker power and brightness versus the P700, but the difference isn’t night-and-day — P5 is bright enough to create up to a 100″ diagonal video projection in dim lighting conditions, with plenty of color at smaller screen sizes. It’s like an excellent featherweight boxer compared with the solid middleweight P700. 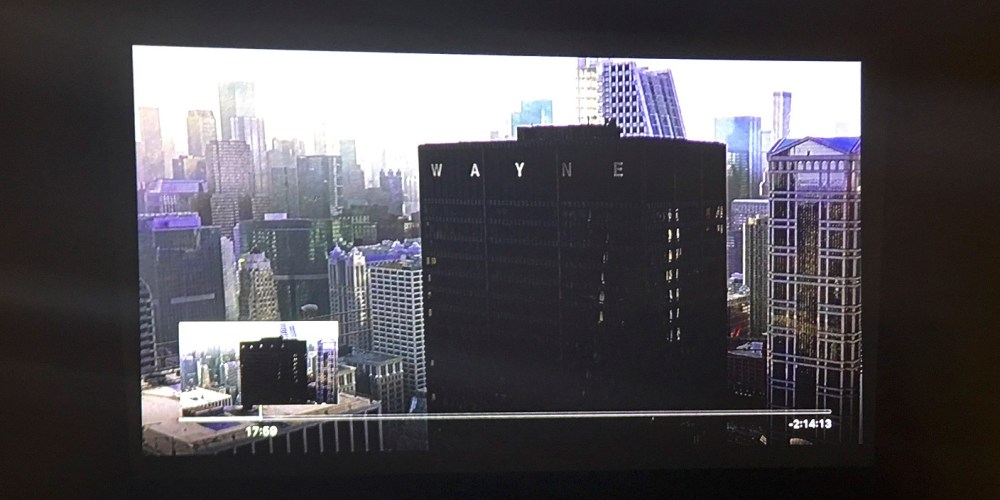 Normally, I’d give the P5 a full review, but in all honesty, it’s just a smaller version of the P700 with the same basic accessory bundle, pros, and cons — including the really-should-be-replaced tripod pack-in. The only major difference is that you’re paying less for less power, and going from an iPad mini footprint down to 2/3 of the size. Pick the model that best matches your budget, bearing in mind that while the P700 is a better overall performer, the P5 delivers slightly better value for its lower price.

4. Quick Thought #1 – For 2016, Apple Needs To Focus On Both Execution And Innovation. Some pundits have opined that Apple just needs to spend 2016 focusing on getting its house in order — improving the Apple TV’s, Apple Watch’s, and iPad Pro’s not-quite-finished software. Others have said that Apple desperately needs to come up with some major innovations to make its now leveled-off product lines exciting again. Who’s right?

I’ve had a lot of time to think about these topics over the past month, and my conclusion is that Apple needs to deliver heavily on both innovation and execution this year. Although it will make billions of dollars in 2016 no matter what it does, its long-term health now depends on a return to past form, when its events used to be exciting and “finished” products shipped in non-beta form. I can’t help but feel that the iPhone, iPad, and Mac have become stale. They’re all great devices, but they haven’t delivered industry-stunning breakthroughs in years. What new features they get seem not to work properly or impressively for at least a year, if not longer, and old features (hey, Siri) have become riddled with incredibly annoying issues. Another year of the same-old, same-old won’t be good for Apple, so I’m hoping to see some bona-fide excitement rather than more incrementalism throughout 2016.

5. Apple VR: I’m Not Holding My Breath. Following the lead of Oculus, Sony, Valve, Samsung and others, Apple is reportedly exploring virtual reality products — a category that has been under development for over 20 years by other companies. Yet apart from scattered patents and reports of secretive development, we’ve seen relatively few signs that Apple is actually planning to release anything in the VR category any time soon, or that it has something major to bring to the category Oculus has largely defined (but stands to lose to Sony over unrealistic pricing).

Based on what I’ve been reading, I seriously doubt that we’ll see any Apple-branded VR hardware for at least 2 years, probably longer. The company appears to be in the middle of staffing up for the project, rather than substantially finished with it, which would be necessary for near-term production. History suggests that it will let other companies trailblaze the category, only releasing dedicated hardware if and when the dust has settled. It certainly could release (or, via the App Store, embrace) a Samsung Gear VR-like “mount your iPhone on your face” enclosure earlier than that, but given the pace and apparent priorities of the company’s designers, I’d be surprised to see even an Apple-branded VR accessory for at least a year.

It’s never wise to rule Apple out — even when it’s sitting on the sidelines — but I can’t help but wonder whether other companies will spend the next year or two continuing to lock down the key technologies that make VR truly user-friendly. VR has been touted as the next frontier of computing for most of my adult life, but because the concept/medium/format literally depended on yet-to-be-perfected head tracking, display, and control technologies, it has made little to no impact on mainstream society. That looks set to change over the next couple of years, but while other companies have clearly invested in solving VR’s hardware and software challenges, Apple’s been focused on developing watches, cable boxes, and cars.

Is Apple missing out on something big with VR? Or won’t anyone care about it 2-3 years from now? I’d be curious to hear your thoughts below.