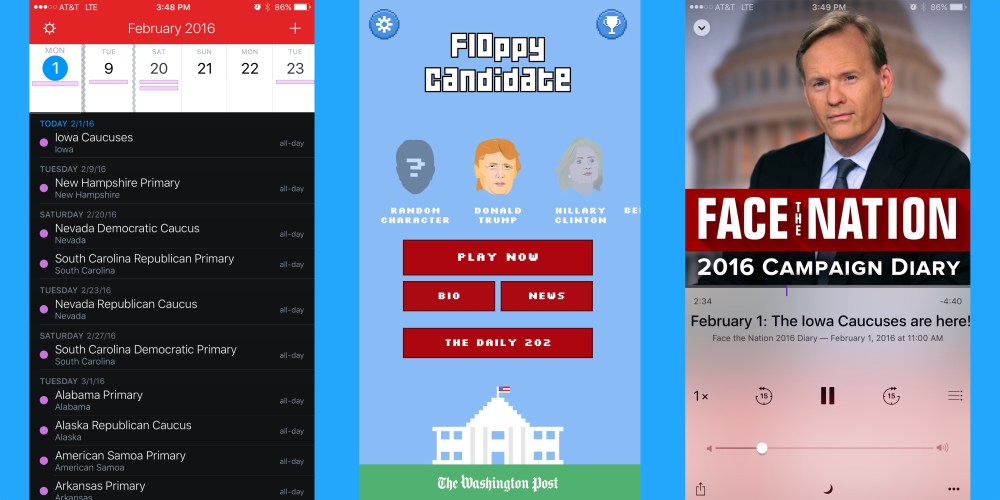 Today marks the official kick off of Americans deciding who will be the next President of the United States with the Iowa caucuses taking place tonight. So without stepping into partisan territory, I wanted to share a few helpful tips for keeping up with the whole election season using your iPhone, iPad, or Mac.

First up is a classic calendar tip for following exactly when and where everyone will be voting across the country. Some states hold caucuses while other states hold primaries, different parties often vote on different days, and U.S. territories (not just states) make the calendar.

The easiest way to keep track of when everyone votes and where is to subscribe to a calendar that already has all of this information. The New York Times has a page where you can view 2008 and 2012 winners, delegate counts, and this year’s results as they’re counted.

There’s also a full 2016 primary calendar put together that works with Google Calendar as well as Apple’s Calendar app on the Mac. You can’t subscribe from iOS, but subscribing on the Mac syncs with iPhone and iPad if you’re using iCloud. Here’s how:

I keep track of my calendar on iPhone, iPad, and Mac using Fantastical, and subscription calendars work just fine there too. Of course you can unsubscribe at any time, or just hide the calendar until you need it, but it’s especially useful if you want an easy way to track the election schedule.

While subscribing to a calendar can tell you when people vote, subscribing to the right podcasts can help you learn why and how people vote. Because I ready and write about technology daily and record a weekly Apple podcast, the majority of podcasts I subscribe to are about politics so I have a few recommendations here.

If you’re really interested in government, campaigning, and politics, these podcasts offer historical storytelling and wonky discussions that are worth a listen:

Personally, I use Apple’s Podcasts app on iPhone and iPad to listen to shows (iTunes on the Mac stinks as staying in sync), but Overcast for iOS is a popular alternative with Smart Speed features to make subscribing to way-too-many podcasts like I do more manageable. Downcast has an iPad and iPhone app (with CarPlay and Apple Watch versions) and Mac app as well if you want the same experience across platforms.

Breaking News is my go-to app for receiving push notifications for any major news story. You can easily find a dozen news apps from different sources, but Breaking News works for me as a single app to reliably serve up need-to-know headlines in real time.

If you follow enough people on Twitter that frequently share political news stories, Nuzzel can be a particularly useful app. You set a threshold for how many times friends should share stories on Twitter and Facebook, the Nuzzel alerts you with a push notification. Personally, I follow a lot of tech-focused accounts as well so there’s a fair mix for me.

And I’ll leave you with this wild card app from The Washington Post: Floppy Candidate. It’s a ridiculous take on the Flappy Bird game phenomena that came and went a couple of years back, only you play as presidential candidates “Donald Trump, Hillary Clinton, Ben Carson, Bernie Sanders, Jeb Bush, Marco Rubio, Ted Cruz, Rand Paul, Chris Christie, Carly Fiorina, Mike Huckabee, Martin O’Malley and John Kasich” plus 2020-candidate Kanye West because why not. It’s completely silly but somehow still feels historical and useful with candidate quizzes and campaign references that political buffs like me will appreciate.

Have you own tips for keeping up with the election cycle with your iPhone, iPad, and Mac? As ever, let us know in the comment.