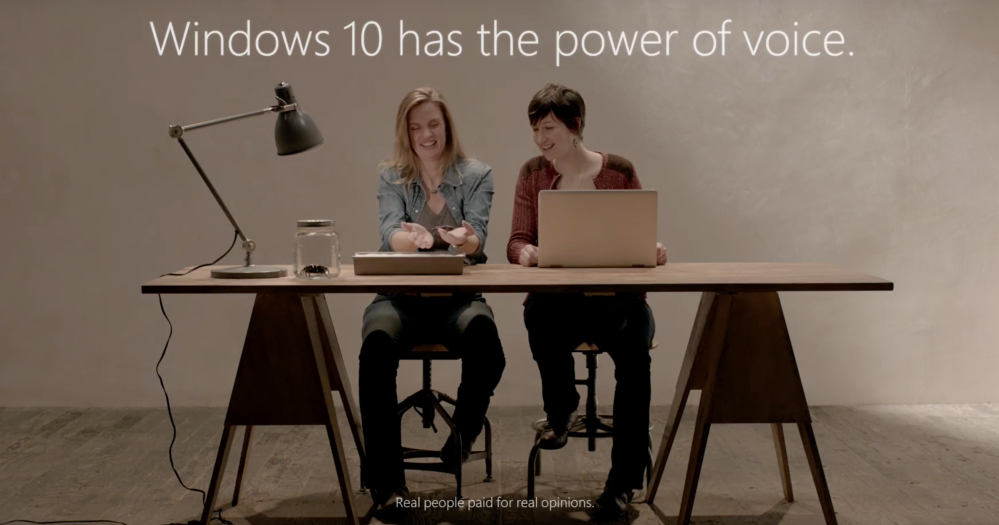 Microsoft is currently running a new series of ads featuring ‘The Bug Chicks’, with each ad directly targeting a weakness in Apple’s Mac operating system. Kristie and Jess, curiously labelled as ‘real people paid for real opinions’, walk through several ways that Windows 10 helps them teach kids about bugs and the microscopic world.

The ad series focuses on several different competitive advantages Windows currently holds over OS X, such as touchscreen-equipped laptops for sketching and drawing, Cortana as a personal voice search assistant and face recognition for hands-free account login. Some of the things Microsoft highlights, like the absence of Siri on OS X are expected to be addressed by Apple later in the year, of course. Watch all four videos after the jump:

The videos show the teachers drawing a sketch of a bug on the PowerPoint project using their finger, with an immediate jab at Mac hardware: ‘I don’t have a touchscreen on my Mac, I’m jealous of that’. Apple has been very clear in recent years that it thinks touchscreen laptops are a bad idea, keeping touch exclusive to iPhones, Apple Watch and laptop-replacement tablets like iPad Pro.

One of the ads is dedicated to the face login feature, where Windows customers can use the front-facing camera of their computer combined with Windows OS face-detection to login to their account hands-free, no password entry required. This is something Apple may be resistant to add because of privacy concerns. It can also be very frustrating for users when the face detection fails to identify the user — obviously in the ad it works flawlessly.

‘Even on the new Macs they don’t have that’ is a common refrain in these commercials. It’s a blatant attempt by Microsoft to appear ‘cool’ again in the computing space, whether ‘The Bug Chicks’ ads will make that happen is another question entirely. Apple’s Mac laptop line has been stagnating for a while, so refreshed hardware for these products is expected soon. Apple is also prepping to unveil a brand-new 9.7 inch iPad Pro at an event on March 21st, which continues its post-PC efforts … alongside a new 4-inch iPhone and updated Apple Watch bands.