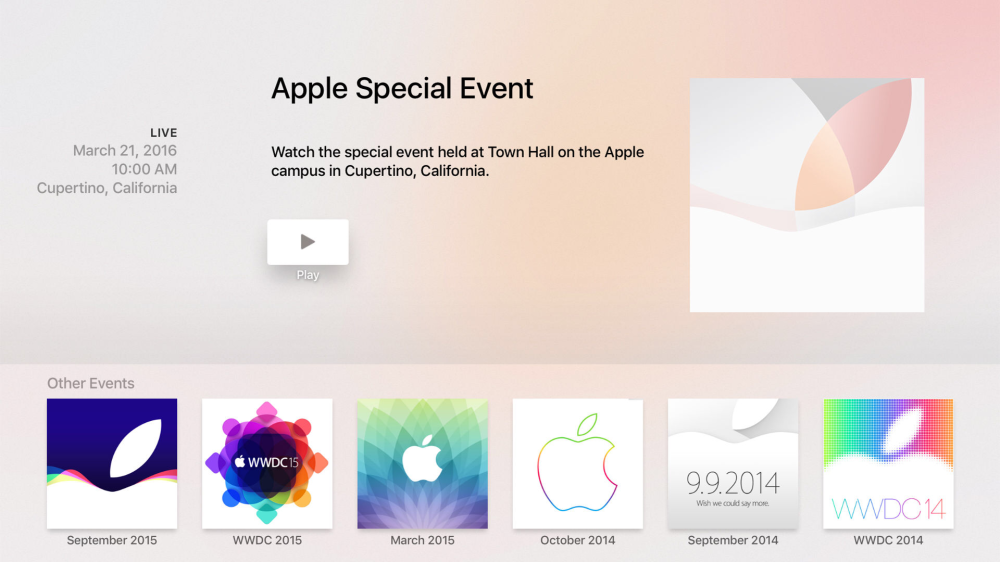 Ahead of Apple’s media press event on Monday, Apple has added a new Apple Events app for the fourth-generation Apple TV. The Apple Events channel lets Apple TV users watch the livestream of Apple’s announcements from their television. Unlike previous generations of Apple TV, the Apple Events app does not appear automatically on the Home Screen. Instead, users must find the app in the tvOS App Store and download it to their device.

The channel lets users tune in to the live stream for next week’s event as well as watch recordings of previous events. The tvOS app is basic but includes some nice contextual conveniences for users, including the scheduled time of the March 21st event in the users’ local timezone.

The process to watch live should be the same for second and third-generation Apple TV users; wait for the Apple Events channel to magically appear on the home screen. If you aren’t on Apple TV and want to follow along, visit http://www.apple.com/live from a Mac, iOS device or Windows computer. On the cards for the upcoming event is Apple’s long-rumored 4-inch iPhone SE, a new 9.7 inch iPad Pro, revamped Apple Watch lineup featuring new band accessories and more. Read 9to5Mac’s full roundup for a walkthrough of everything to expect. As usual, we will bring full coverage of the event as it happens.