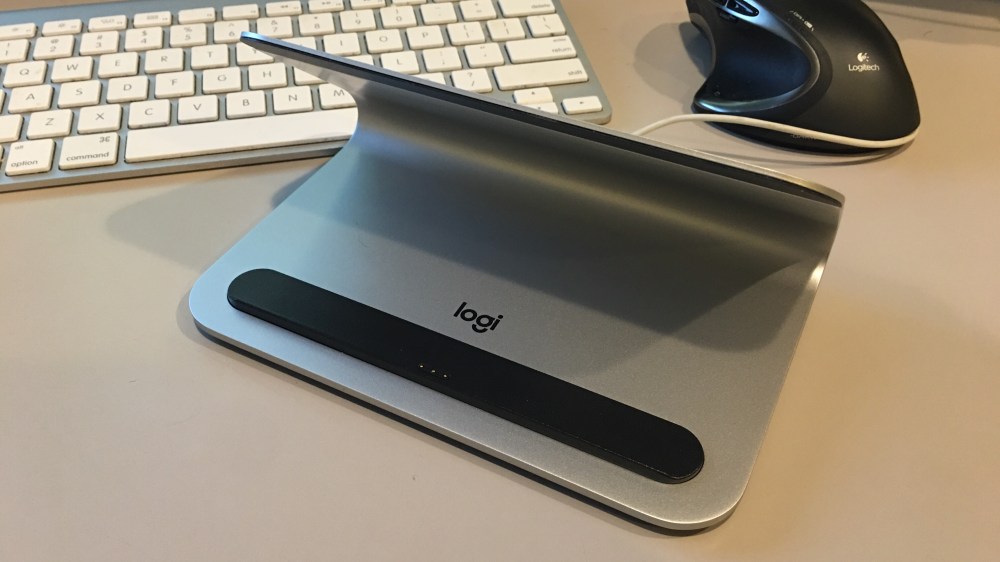 As I’ve detailed in the past, I originally purchased the 12.9-inch iPad Pro last November before switching to the to 9.7-inch model last month due to the lack of software optimization on Apple’s part. When I first wrote about this switch, some people were curious as to why I went with the more expensive 9.7-inch iPad Pro over the cheaper iPad Air. Well, there were too main reasons: Apple Pencil and Smart Connector.

Since the start, the potential of the Smart Connector has intrigued me. So far, we’ve only seen a few keyboard cases that take advantage of the feature, but now Logitech is announcing its LOGI Base Charging Stand with Smart Connector for iPad Pro and I’ve been using it for the past few days…

On the surface, the Base looks similar to various other charging docks we’ve seen over the years, but look closer and you’ll see Smart Connector prongs and a Lightning port on the back. This means that you can dock your iPad Pro to the Smart Connector and charge it just like you would when you dock an iPhone. And it’s really well thought out.

In terms of design, the Base is high quality and well executed in several ways. The stand is made out of high-grade aluminum, so it blends in very nicely with any color iPad Pro. As you can see in the images, the Base is designed so that the iPad Pro is angled at what Logitech says is the “perfect viewing angle for enjoying apps and entertainment.” Personally, I would have liked to see a slightly lower angle, but presumably in order to make the Smart Connector functionality work reliably Logitech had to angle it at what it did. 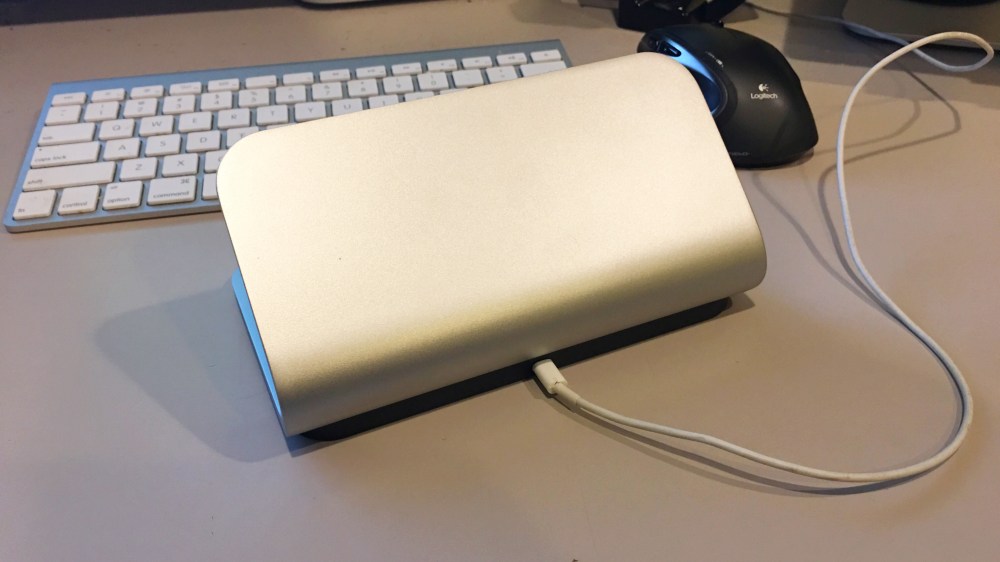 The Smart Connector pins are housed on a black strip so they’re easy to find and connect to, while there’s a Logi logo above those pins. On the bottom of the Base is a slightly sticky adhesive material that prevents it from sliding around or potentially falling over while your iPad Pro is docked. This is especially useful for the larger and heavier 12.9-inch iPad Pro that would potentially cause the dock to fall over or be unstable.

As soon as you place your iPad Pro on the LOGI Base it begins to charge via the Smart Connector. One thing I was curious about was whether or not there would be any difference in charging times between using the Smart Connector or plugging the Lightning cable directly into the iPad Pro. In my testing, however, I didn’t notice any major differences. Although, keep in mind I tested the 9.7-inch iPad Pro with the Base and results could vary with the larger model. One annoyance is that if you’re using Apple’s Smart Cover, you’ll have to remove it in order to reveal the Smart Connector pins. This flaw is more on Apple’s part than Logitech’s, though.

All in all, the LOGI Base is a really solid iPad Pro dock that takes advantage of a feature unique to it in the Smart Connect. Most iPad docks I’ve used over the years don’t actually have a Lightning connection built-in. Instead, you simply place the iPad on the dock and connect a Lightning cable directly to the device. With the LOGI Base, however, that is a thing of the past.

If anything, the LOGI Base highlights the potential that the Smart Connector offers for accessory makers. Overall, however, Logitech has created a solid and well executed iPad Pro dock. The adhesive on the bottom ensures that your iPad Pro is safe while it’s docked and the all-aluminum design means that it blends in perfectly with your device and other Apple products.

If there’s one downside to the LOGI Base, it’s the price tag. The dock comes in at $99.99, which is certainly on the higher-end of the accessory market. Nevertheless, it’s available now from Logitech.

Logi BASE: The Easiest Way to Charge and Use Your iPad Pro

NEWARK, Calif. — April 26, 2016 — Today Logitech (SIX: LOGN) (NASDAQ: LOGI) announced the Logi BASE Charging Stand with Smart Connector™ for iPad Pro™, enabling a new way to charge your 12.9-inch or 9.7-inch iPad Pro while you use it. A first of its kind, Logi BASE gives you the perfect viewing angle for enjoying apps and entertainment in every room. You can type on the screen or access Siri® while simultaneously charging your iPad Pro through the Smart Connector.

“Last fall we introduced the Logi CREATE – the first third-party keyboard compatible with Apple’s Smart Connector,” said Michele Hermann, vice president of mobility at Logitech. “With the introduction of the new 9.7-inch iPad Pro, we’re excited to continue to deliver innovation – beyond the keyboard – that leverages the Smart Connector and helps you make the most of your iPad Pro, in any room at home or the office.”

The Logi BASE provides the perfect place for your iPad Pro in every room. With over one million apps designed specifically for iPad, and the intelligence of Siri®, you can completely rethink the way you use iPad Pro. Set your Logi BASE on the kitchen counter for the perfect viewing angle when following a recipe or using cooking apps. Or, you can call on Siri for help setting a timer, converting cups into ounces or adding items to your grocery list. To make your morning routine a breeze, place your iPad Pro and the Logi BASE on your nightstand and ask Siri about the weather or your day’s upcoming schedule. And at the office, you can set your iPad Pro and Logi BASE next to your laptop or desktop for the perfect second screen, enabling new levels of creativity and productivity.

The Logi BASE belongs with your iPad Pro. From the high-grade aluminum to the premium finish and curved shape, every detail is designed to complement the iPad Pro, and makes it a pleasure to look at and use.

Availability The Logi BASE is compatible with the 12.9-inch and 9.7-inch iPad Pro and is available today from Logitech and Apple for a suggested retail price of $99.99. For more information, please visit Logitech.com, our blog or connect with us on Facebook.

Logitech designs products that have an everyday place in people’s lives, connecting them to the digital experiences they care about. Over 30 years ago, Logitech started connecting people through computers, and now it’s designing products that bring people together through music, gaming, video and computing. Founded in 1981, Logitech International is a Swiss public company listed on the SIX Swiss Exchange (LOGN) and on the Nasdaq Global Select Market (LOGI). Find Logitech at www.logitech.com, the company blog or @Logitech.