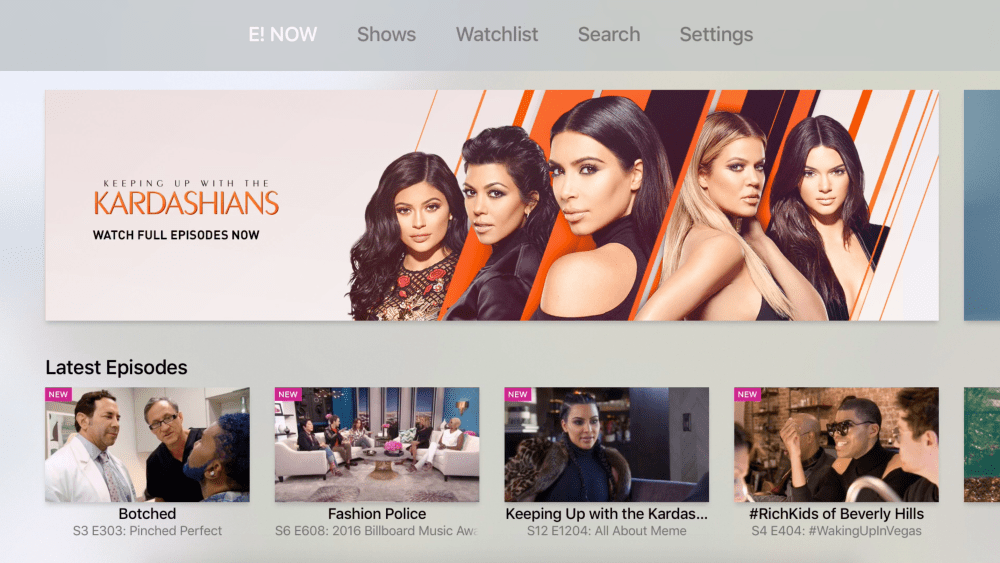 NBC Universal today announced that it is bringing a trio of new apps to the fourth-gen Apple TV. Starting today, those with a cable login can now watch content via the Syfy, E!, and Bravo applications with their Apple TV. Subscribers will have access to full seasons of the networks’ most popular series, including current and past episodes.

NBC Universal has already made NBC, USA, NBC Sports, and CNBC applications available on the tvOS-powered Apple TV, so with today’s additions there are now seven total NBC Universal networks available to cable subscribers with an Apple TV.

Syfy is home to shows such as “The Magicians,” “12 Monkeys,” and “Face Off.” With the E! app, users can now get their Kardashian-fix and watch shows such as “Keeping Up with the Kardashians” and Caitlyn Jenner’s “I Am Cait,” as well as other shows like “Botched” “#RichKids of Beverly Hills,” and “WAGS.”

The addition of Syfy, Bravo, and E! applications comes the same day as it was reported that Apple is looking to spend “several hundred million dollars a year” ramping up its original content efforts after mulling an acquisition of Time Warner. Tim Cook said at Startup Fest earlier in the week that he wants Apple to be a catalyst in moving the entertainment forward.

Apple earlier this year announced its first original TV show focused on the “app economy” in partnership with Will.i.am. The company is also said to have had a secret but strong presence at the Sundance Film Festival, meeting with “triple A-list” taken to create a lineup of original TV shows. Apple is also reportedly working with Dr. Dre on an original series called “Vital Signs” that has “no shortage of violence and sex.”

In the meantime, existing cable networks are continuing to bring their own applications to the Apple TV, as evident by NBC Universal’s latest rollout. The Syfy, E!, and Bravo applications are now available on the tvOS App Store.