Opinion: Is the iOS vs Android battle headed down the same path as Mac vs PC? 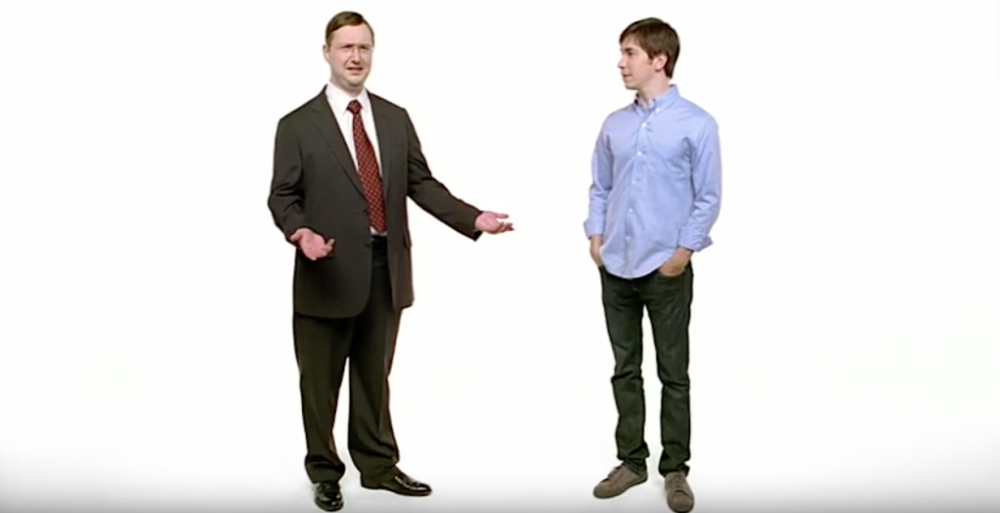 Yesterday, well-respected venture capitalist Mary Meeker released her annual Internet Trends Report. Inside the over 200 slide PowerPoint were some interesting numbers relating to the continuing battle between iOS and Android. As we reported last night, Meeker’s report showed iOS continue to decline in marketshare, while Android continues to gain. In many ways, the current split between Android and iOS in terms of market share and unit shipments is very similar to the split between Mac and PC shipments and marketshare. And it’s been a long time coming for Apple.

With the iPhone, Apple took a similar strategy as it took many years ago with the Macintosh. It introduced a revolutionary device that was priced much higher than existing products on the market, but it also offered features and capabilities that had never been available before. The original iPhone came in at $499 and $599 on-contract, which were unheard of prices at the time.

When Apple first introduced the Macintosh, the computer market was heavily dominated by IBM, as shown in the graph below. When it introduced the iPhone, RIM and Nokia dominated the smartphone market. In both instances, Apple never gained a lead in marketshare, but it saw tremendous, unprecedented growth. Especially with the iPhone.

In many ways, what Apple is now facing in the smartphone industry is the same as what it has always been facing in the PC industry. Apple is offering a pricier, more locked-down ecosystem while other manufacturers offer more affordable and open devices. For Apple, it should be deja vu. It took the same strategy with the iPhone as it took with the Mac and it’s getting the same results.

Apple, for the first quarter of 2016, saw an average selling price of just over $1270 in for the Mac, according to the company’s financial filings. The average selling price of a PC, however, for 2015 was $379, according to Credit Suisse data. That means that, yet again, Apple is bringing in 3 times as much revenue for every Mac it sells versus every PC that is sold. 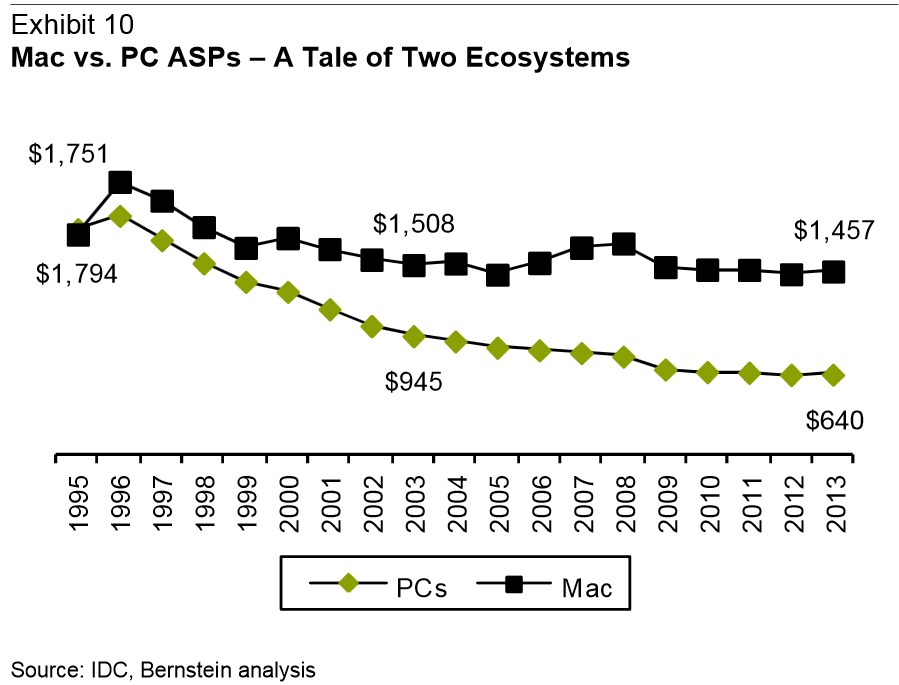 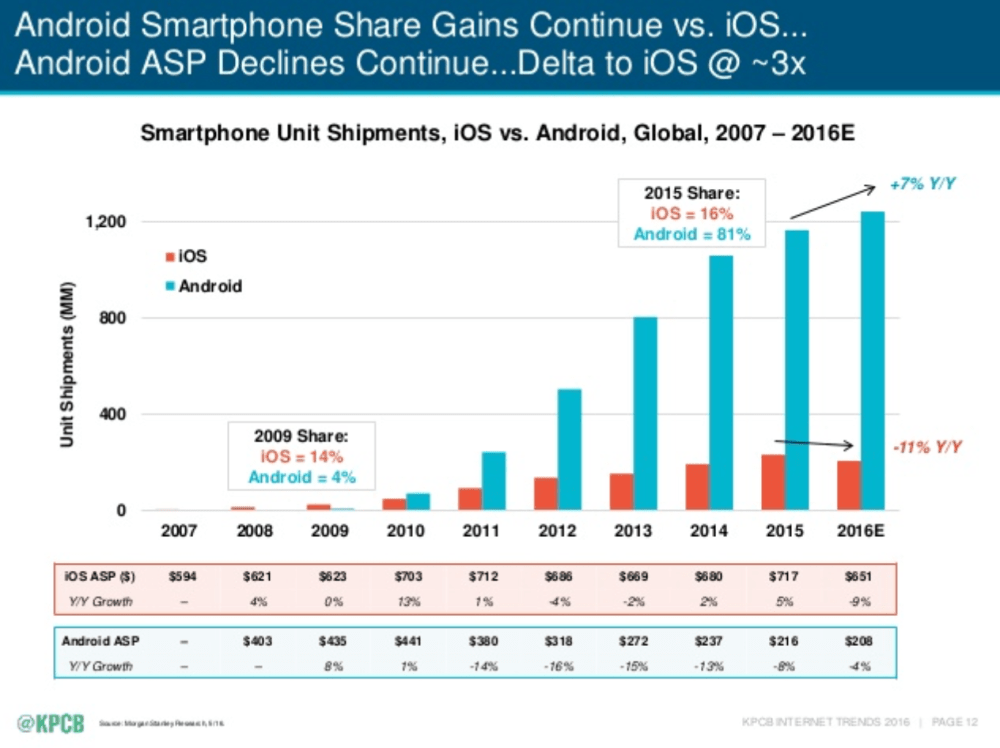 In 2016, however, Meeker expects the iPhone average selling price to fall by 9 percent year-over-year, marking the biggest decline Apple has seen. In many ways, this is due to Apple catering to lower-cost markets like India and those who prefer smaller screens with the iPhone SE. This brings up an interesting question, though. Will Apple cave and start to cater towards the lower-end of the market like Android devices do?

Personally, I don’t see that happening. While Apple did report its first ever decline in revenue last quarter, it’s apparent that Tim Cook and the rest of the company are optimistic about the future. I see Apple continuing to take the same strategy that it has always taken: higher cost devices where you pay for the “experience” of owning it. For instance, with the Mac, Apple often touts customer satisfaction statistics versus marketshare numbers, although the company is always quick to point out that the Mac is the platform gaining in the PC industry.

In terms of marketshare, Apple currently holds 7.4 percent of the PC market and 16 percent of the smartphone market versus 87 percent held by Android.

It’s basic economics that the device that costs less will sell more in terms of volume. It’s the same idea that’s applied to the Mac and PC markets for years and it’s no surprise that it’s applying to the smartphone market, as well.  I see Apple taking the same approach with the iPhone as it has taken with the Mac. Marketshare is not a worry, while average selling price and satisfaction are.

In many ways, we’re in the modern version of the “I’m a Mac” and “I’m a PC” era, but this time it’s “I’m an iPhone” and “I’m an Android.” Apple knows that it’s higher average selling price and higher satisfaction rates make it the best company on the market, and it’s not going to worry too much about marketshare. It never has with the Mac and there’s no reason for it to with the iPhone.

What do you think? Is the iPhone vs Android battle starting to shape up a lot like the Mac vs PC battle? Let us know in the comments!