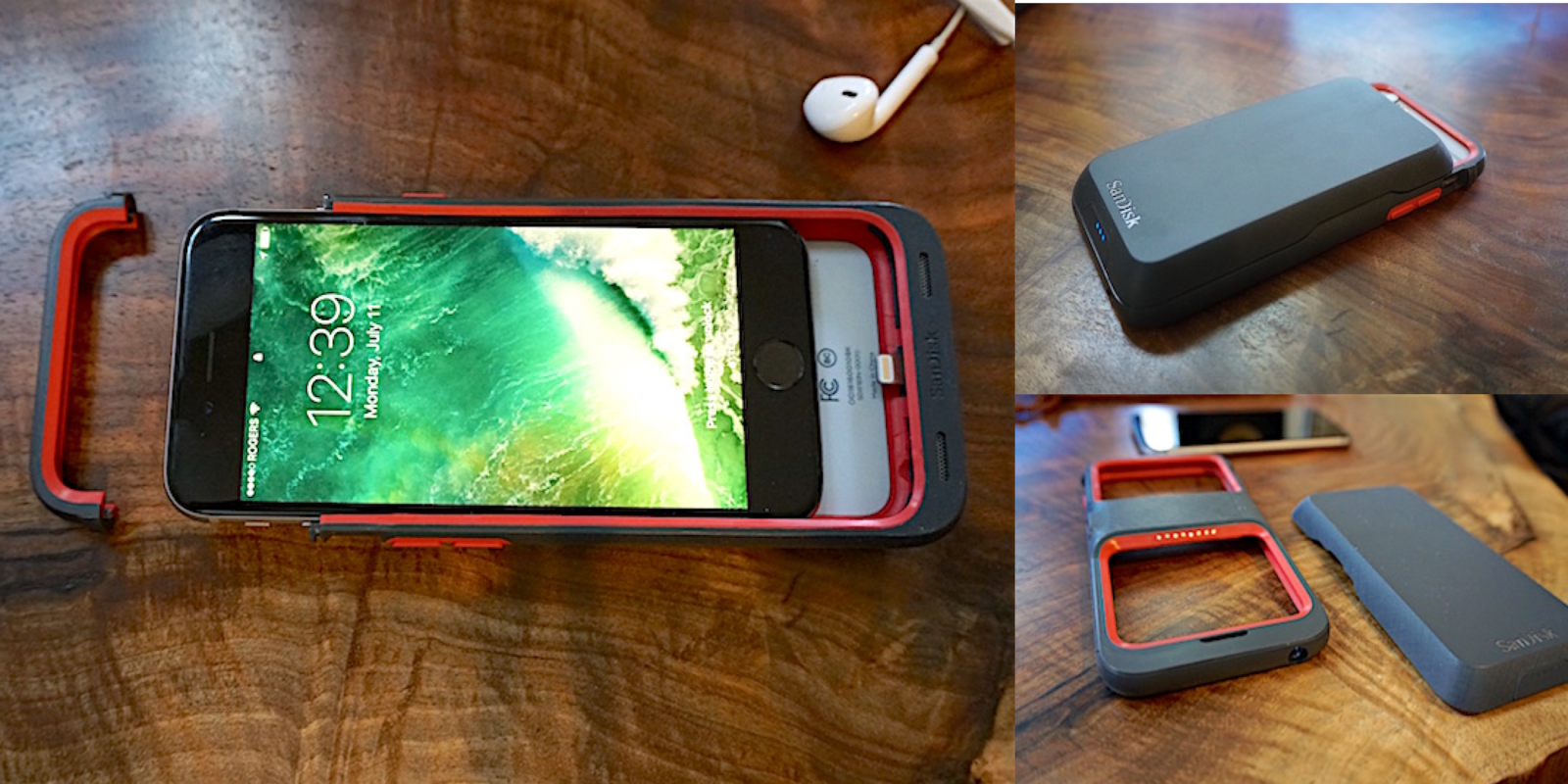 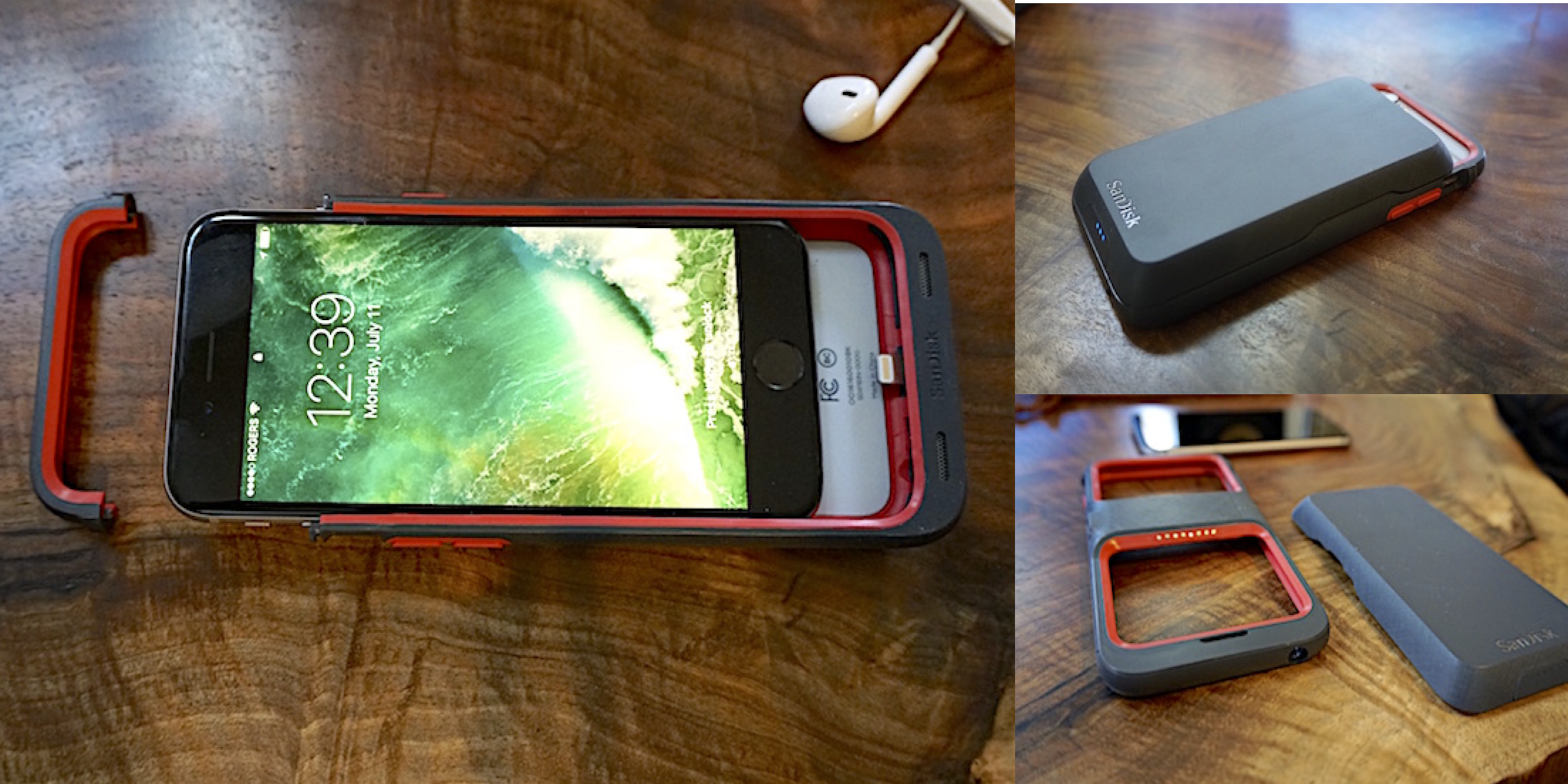 SanDisk’s latest iXpand product is a Lightning flash drive in the form of an iPhone case, allowing you to easily have extra storage for your iPhone at all times. And the  iXpand Memory Case has an optional battery pack that attaches magnetically, turning the case into a single solution for both extra storage and battery life.

The alternative for storage would be a Lightning flash drive in the form of a more traditional thumb drive (I reviewed some previously from SanDisk and others). But that requires you to have it sticking out of the bottom of your phone at all times or carrying it around until needed, which isn’t really ideal for people on-the-go that need both extra storage and battery at all times.

The product has its own companion app called Memory Case available on the App Store. The free app allows you view and manage what you have located in the case’s storage and also view battery life stats and settings if you have the optional battery pack attached.

For photos and video, which is one of the most common reasons people are looking for some extra storage, the app allows for auto or manual photo and video backup, including a built-in camera mode that lets you record directly to the case’s storage. You can enable automatic camera backup, automatically delete photos from your iPhone after a backup, select to backup photos just from iCloud, or manage it all manually.

You can view the music, photos and videos you have stored on the case from within the app, and there’s a function for making backups of contacts and restoring them if needed. You can optionally use password-protected files.

The app is clean and works well, and it improves on the experience for SanDisk’s standalone Lightning drive, which I noted in my review was one of the best apps among competitors. 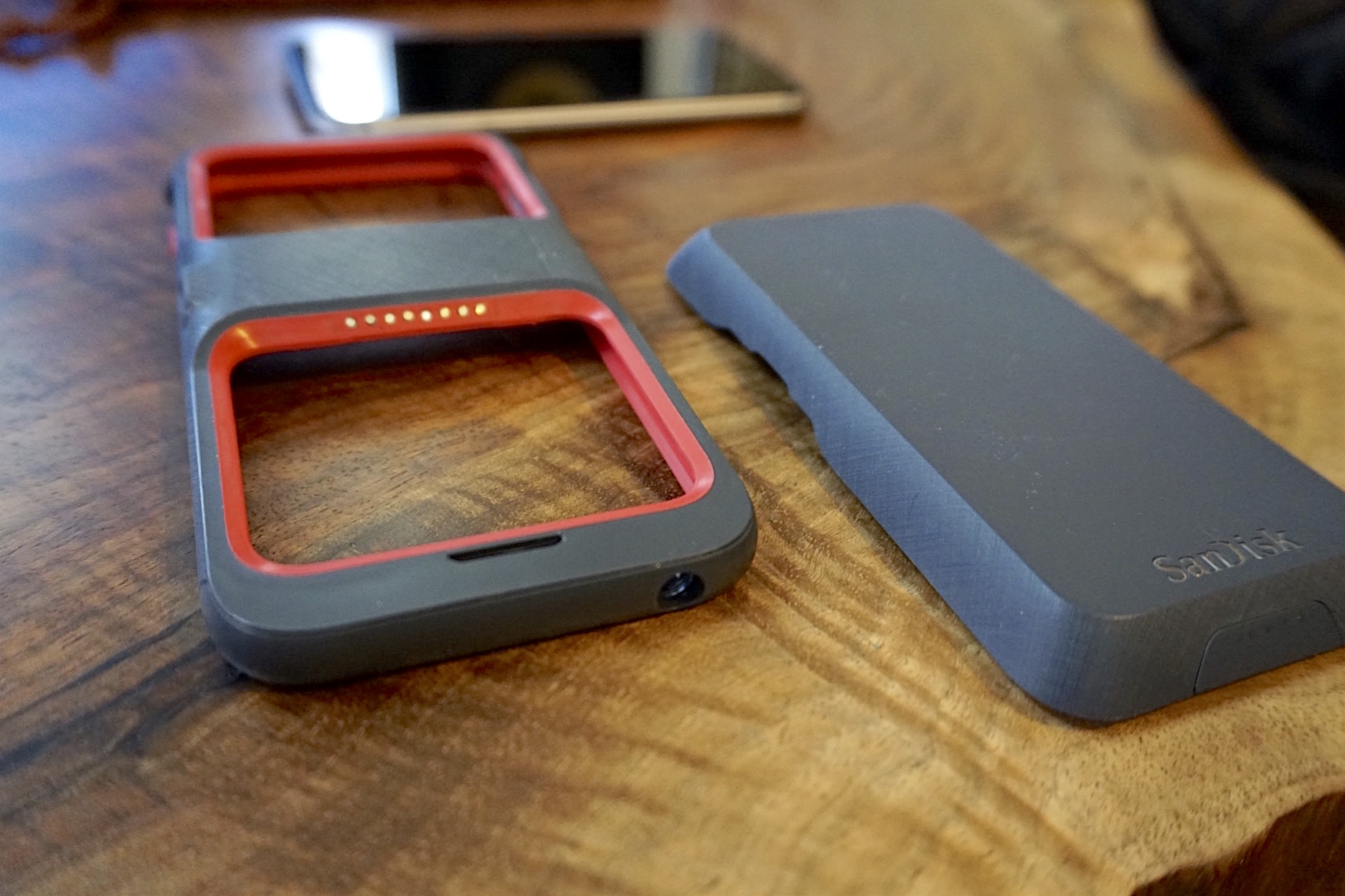 The hard plastic case provides decent protection for the device, and it slides on and off with ease. The device makes a connection to the case via a built-in Lightning connector as it slides in (pictured at the top), and it also requires a Bluetooth connection when using the app, which the company says is “to wake up the device from sleep.”

But without the optional battery attached, the design of the product feels a bit incomplete. Large openings on the back that allow for the battery pack to slide in make the case a bit uncomfortable in the hand without it attached. 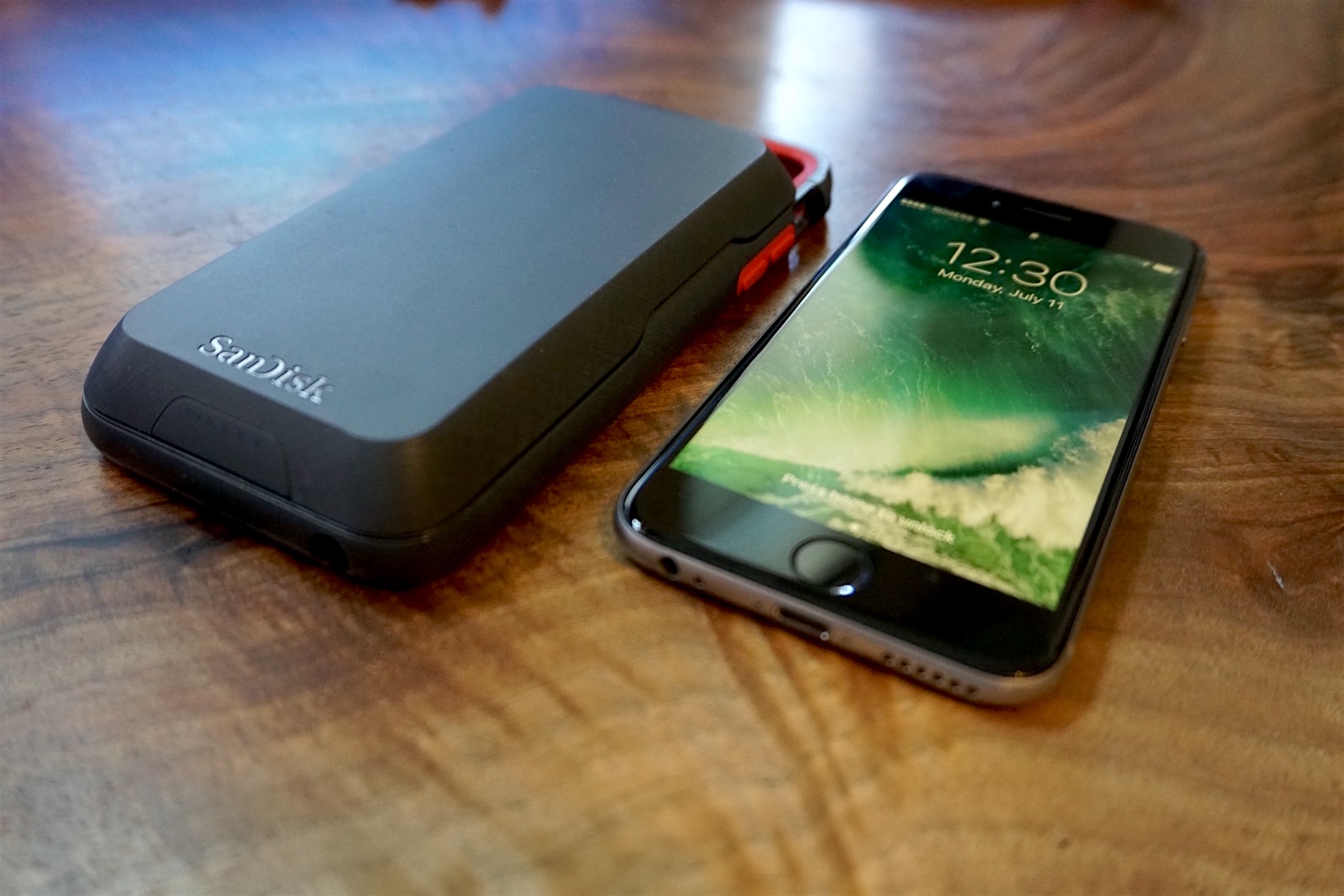 Attach the battery pack, though, and the problem is less noticeable when compared to other products on the market, all of which are necessarily bulky in order to add any significant amount of extra battery life. The battery increases the total thickness of the case to about 20mm (and adds an extra 83gm or 2.93 oz), but its tapered design makes the product more comfortable in the hand than without it. There’s a power button and LED indicators for battery life so you can use the battery without the app if you wish, and it charges with a micro-USB cable (you can charge the battery while it’s attached or not).

The size of the 1900mAh battery in the Memory Case is comparable to Apple’s Smart Battery case for iPhone and other leaders in the space like Mophie. Expect to get a boost of around 60% of your iPhone 6/6s battery. There are products with bigger battery packs that come with slightly thicker profiles, and Mophie also makes one of the only competitive products with both built-in storage and battery with its more expensive Space Pack products. Mophie’s Space Pack measures in around the same as the SanDisk Memory Case, but packs in a larger 3,300mAh battery. It maxes out at 64GB of storage, however, compared to 128GB for SanDisk.

If you absolutely need both the extra storage and battery life at all times or for an extended period of time, what’s the alternative? You could use a separate Lightning drive (like SanDisk’s) and another battery pack either in case form or standalone, but then you’d end up with an even bulkier package and more accessories and cables to lug around.

The Memory Case is probably best for those of you that need both the extra storage and the battery on a daily basis, as there are solutions I’d prefer for both of those functions separately.

The product works well, the companion app for iOS included, and it’s nice to be able to monitor battery and storage with a single solution. If I had one hope for the second generation memory case, it would be for SanDisk to refine the physical design of the case further.