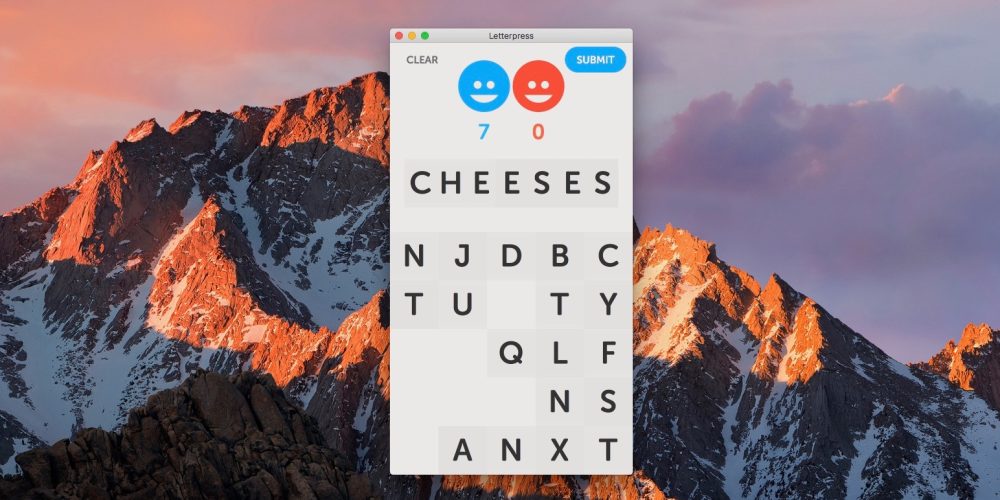 Remember Letterpress for iOS, the fun word game from Loren Brichter a few years ago? The app was bought by new developers and started receiving updates again earlier this year, and today Letterpress is finally available on the Mac. The mechanics of the game remain the same, but there have been some other improvements to the competitive word game recently too.

First back to Letterpress. The Mac version of the word game is available for free through the Mac App Store, and gameplay is just like you find on iPhone and iPad. You have a board of letters to work with, an opponent with the same board, and you both compete round by round to create words out of the available letters. The competitive angle kicks in as one player and red while the other is blue, and using letters lets you own them until the other player takes them back. Strategically, cornering letters darkens them and while they can still be used, the other player doesn’t get to own them.

Now that Letterpress is cross-platform and doesn’t use Game Center as a backend, you will want to keep something in mind if you want to secure your usual username. The game has an option to save your username which requires verifying your email address. Other than that, Letterpress is the same addictive word game as what debuted in 2012. The Mac version looks a lot like an iPhone app running in a window, not even an iPad app, but gameplay totally works including alerts that notify you when it’s your turn.

Find Letterpress for OS X/macOS for free on the Mac App Store; OS X 10.8 Mountain Lion or later is required.

Speaking of older versions of OS X, Microsoft announced today that it will be dropping support for some legacy versions of OS X from Skype for Mac going forward. While the current version of Skype requires OS X 10.9 Mavericks or later, Skype also provides an older version that works with OS X 10.6 Snow Leopard.

Skype highlighted that it will continue to support OS X 10.10 Yosemite going forward as macOS 10.12 Sierra is the latest version in the wild, but legacy support for OS X 10.6 Snow Leopard will end in October. Microsoft instead points users on legacy versions of OS X to try Skype for Web as an alternative after that period.

Skype for iOS support remains unchanged with the latest features requiring iOS 8 or later for now and basic functions likely working on older versions without guarantees. You can read more about Microsoft’s plans here.