Opinion: Why Apple’s statement on Irish tax ruling seems tone-deaf, but nothing will happen anytime soon 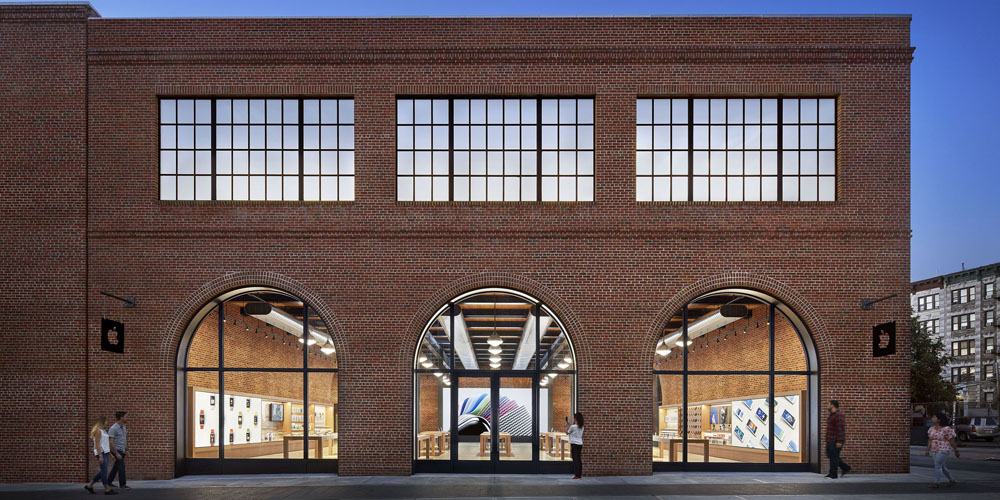 Tim Cook has today posted an open letter regarding today’s ruling that the company must pay €13B ($15B) in back tax after Ireland broke the law in offering the company a sweetheart deal. In it, he states that Apple is ‘confident that the Commission’s order will be reversed’ on appeal.

It’s honestly hard to see where such confidence comes from. The letter effectively makes three arguments, only one of which is relevant to the case …

First, says Cook, Apple has been good for Ireland, creating employment and pumping money into the local economy. This is absolutely true, but only serves to underline why the Irish government would wish to encourage the company to base its European operations there at almost any cost. It is not an argument that the inducements offered by the Irish government were legal: it simply serves to establish motive for the crime.

Second, is this statement:

Over the years, we received guidance from Irish tax authorities on how to comply correctly with Irish tax law — the same kind of guidance available to any company doing business there. In Ireland and in every country where we operate, Apple follows the law and we pay all the taxes we owe.

This is something of a strawman argument. Nobody has ever suggested that Apple has done anything other than pay all of the taxes it is told that it owes. What is at question is whether the Irish government broke the law in how it calculated Apple’s tax bill, and the European Commission has ruled that it did.

It is also somewhat disingenuous to suggest that ‘any company’ could have received the same ‘guidance’ from the Irish government. Any multinational corporation the government would want to woo there, sure – which is why Google is also being investigated on the same basis as Apple. The mom and pop store on the high street doesn’t get access to that kind of ‘guidance.’

The third of Cook’s arguments is to deny that Apple got any kind of sweetheart deal.

The opinion issued on August 30th alleges that Ireland gave Apple a special deal on our taxes. This claim has no basis in fact or in law. We never asked for, nor did we receive, any special deals.

This one addresses the heart of the matter, but may ultimately come down to semantics. It’s almost certainly true that the Irish government never told Apple in so many words that it could pay less tax than smaller companies. Instead, Apple argued that as almost all its R&D was done in the USA, it was reasonable for Apple in Cupertino to demand hefty licensing fees from Apple in Ireland. Those licensing fees would eat up almost all of the profit the company made in Ireland. It would then pay tax on what little remained (estimates vary from 2.5% at the high end to as little as 0.1% at the low end, once everything is taken into account). Ireland listened to those arguments and said ‘sure, works for us.’

However, there is something odd here. The letter gives the impressions that Apple merely transfers its tax burden from Ireland back to the USA. But given that Ireland’s full-rate corporation tax is substantially lower than that of the U.S., that would seem a strange thing to do. So some kind of shenanigans would have to be suspected.

Cook ends by stating that the company ‘has long supported international tax reform.’ I fully accept this is true. The complex mechanisms through which multinational corporations funnel taxes from one country to another are an embarrassment to the companies which take advantage of them as much as to the governments that facilitate them.

Apple likes to present itself as a friendly, open company that is on the side of consumers. Yet here it is arguing that its complex financial arrangements, which serve to dramatically reduce its overseas tax bills, are justified. It does this as a time when the public mood is very much against such maneuvering. That being the case, and given than Apple isn’t short of cash by any stretch of the imagination, why doesn’t it simply take the moral high road and voluntarily pay the taxes that it really believes should be due?

The answer is that it can’t, for the same reason Cook had to make the arguments he did in his open letter. Company directors have a legal duty to maximize the return to shareholders. If a legal tax loophole exists, the company has to use it. If a ruling like this can be be appealed, the company must appeal it. That’s why Apple is appealing against paying the €13B demanded, and why Cook is arguing that the company is in the right. Not because he personally believes it, but because it is one of his duties as CEO to make that case.

I’ve already explained the reasons I believe Apple will eventually have to cough up the cash, then estimated at $8B. Since I wrote that, JP Morgan estimated a worst-case bill of $19B, and that actual amount now being demanded is closer to that end of the scale. So I disagree with Cook’s confident assertion that the ruling will be overturned, but I do agree with him on one thing.

In a new Investor FAQ on the issue, Apple says that nothing will change in the ‘near-term’ and that the appeals process is ‘likely to take several years.’ That much is, I think, guaranteed. This one will probably run for as long as that endless Samsung patent battle.

But I would make one final point: in seeking to protect the financial interests of shareholders, Apple does also need to consider the PR hit it will take by fighting this ruling. Let’s take a look at one of the tax-avoidance mechanisms Apple pioneered in the 80s – the “Double Irish With a Dutch Sandwich” technique illustrated here bt the NYTimes. 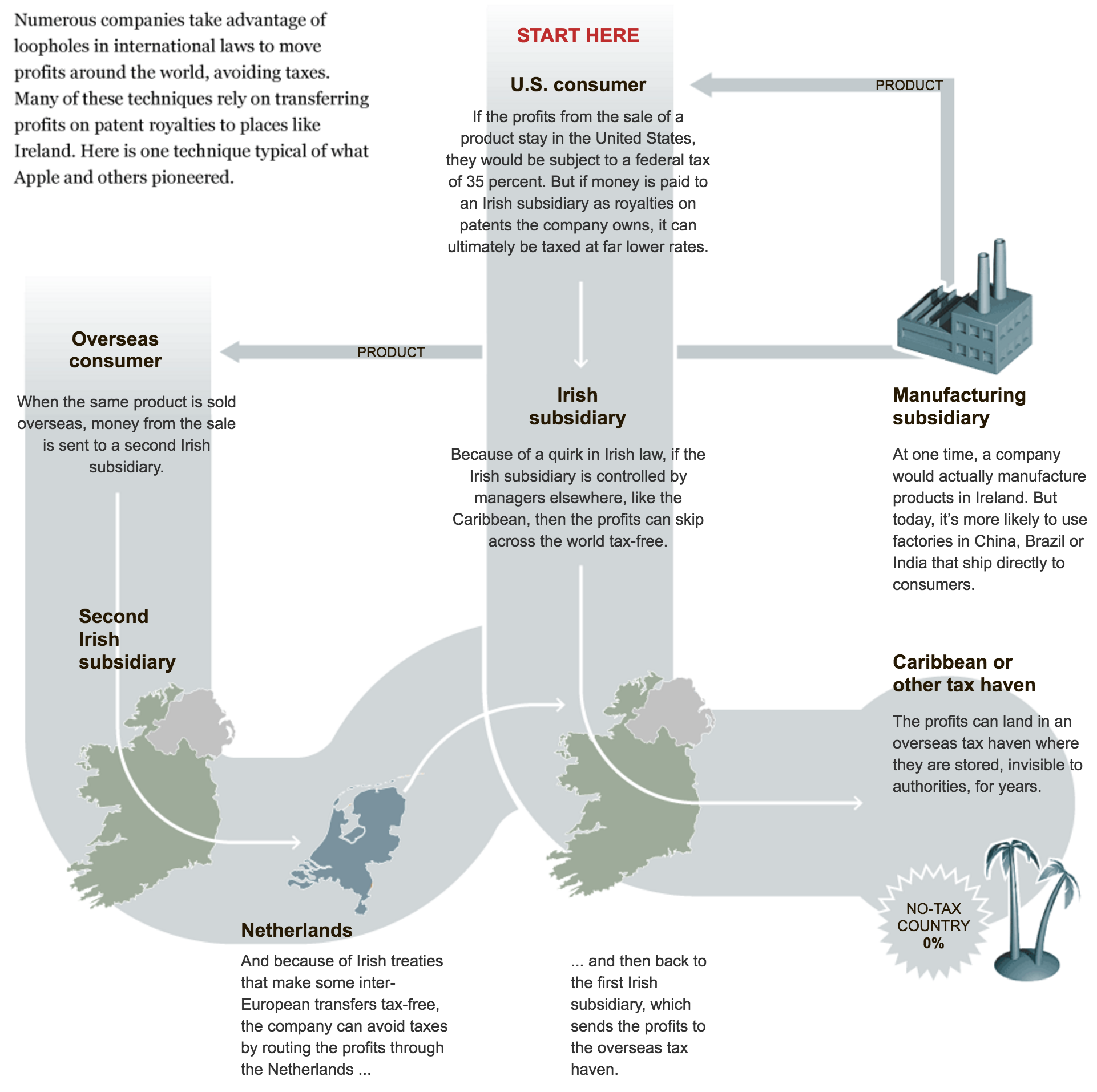 There is no way to spin this kind of arrangement as just. It is clearly an intricate scheme designed to avoid paying taxes that would otherwise be due. And when companies don’t pay their fair share of taxes, you and I have to pick up the slack.

A huge part of Apple’s value is in its brand image. Anything that tarnishes that image – like being seen to defend perfectly legal but rather grubby tax-avoidance measures – could, over the years to come, end up costing the company even more than €15B. It might be smarter in the long-term to take the hit now.