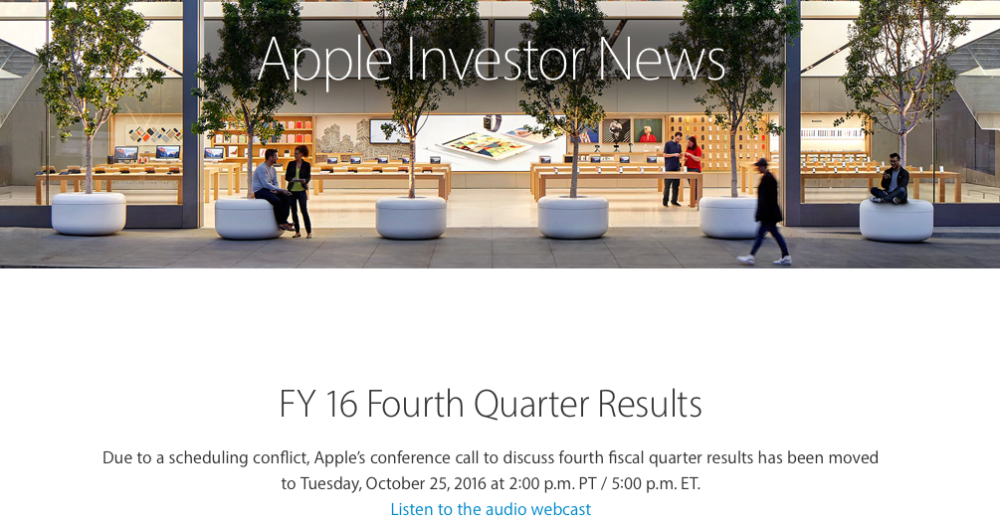 Last week, Apple announced that its Q4 2016 earnings call would take place on Thursday, October 27th. Today, however, Apple updated its Investor News webpage to reveal that, due to a “scheduling conflict,” the earnings call and release have been moved up to Tuesday, October 25th.

It’s unclear what has arisen to cause Apple to move the date of its earnings release. This isn’t the first time the company has done so, though. Earlier this year, Apple rescheduled its Q2 earnings call so executives could attend the memorial service of the late tech icon Bill Campbell.

Apple is expected to offer an early look at iPhone 7 sales during its third quarter earnings call. For the first time ever, however, Apple has not provided opening weekend numbers for the iPhone 7 due to the supply constraints surrounding the launch.

Last quarter, Apple reported revenue of $42.4 billion on sales of 40.4 million iPhones, 9.9 million iPads, and 4.2 million Macs. Below is the guidance Apple provided for its 2016 fiscal fourth quarter:

The call will be held at the standard time of 2PM PT/5PM ET, with the actual earnings press release itself being sent out roughly thirty minutes before then. The live broadcast of the call will be available on Apple’s website and of course we will have live coverage, as well.