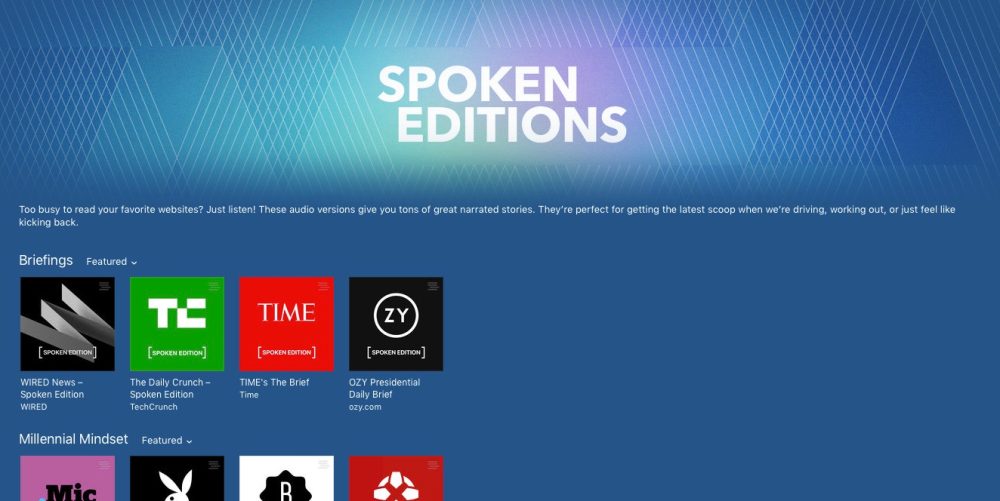 After a premature appearance last month, Apple’s new “Spoken Editions” section in iTunes is now live. Spoken Editions, for those unfamiliar, are narrated pieces of content from a variety of online publishers. Spoken Editions are available in iTunes on the Mac and PC as well as Apple’s first-party Podcasting app for iOS.

As noted by TechCrunch, Apple is launching Spoken Edition in partnership with a variety of publications, including Huffington Post, Reuters, Slate. .Mic, Wired, IGN, Bustle, Fusion, Gizmodo, Jezebel, Lifehacker, TIME, Skift, and Playboy. There are currently over 40 Spoken Editions available.

Apple touts that Spoken Editions are useful in situations where you’re too occupied to read content, but could be multitasking and listening:

Too busy to read your favorite websites? Just Listen! These audio versions give you tons of great narrated stories. They’re perfect for getting the latest scoop when you’re driving, working out, or just feel like kicking back.

Spoken Editions are divided into a handful of categories in iTunes, including “Briefings,” which are quick recaps of recent news, as well as “Millennial Mindset,” “Policy in Perspective,” “Inclusion and Identity,” “Money Talks,” and others.

Apple’s Spoken Editions are powered by technology from SpokenLayer, a company that takes a publisher’s RSS feed and quickly turns the content into audio. SpokenLayer says that, as part of its partnership with Apple, it will produce “hundreds of episodes” per week for Spoken Editions.

Spoken Editions come as Apple is believed to be developing a standalone Siri device similar to Amazon’s Echo. Spoken Editions would theoretically be valuable for such a device and would allow users to quickly get an audio recap of content.

Spoken Editions can be found in Apple’s Podcasts app or via iTunes. They are free, with some being ad-supported.