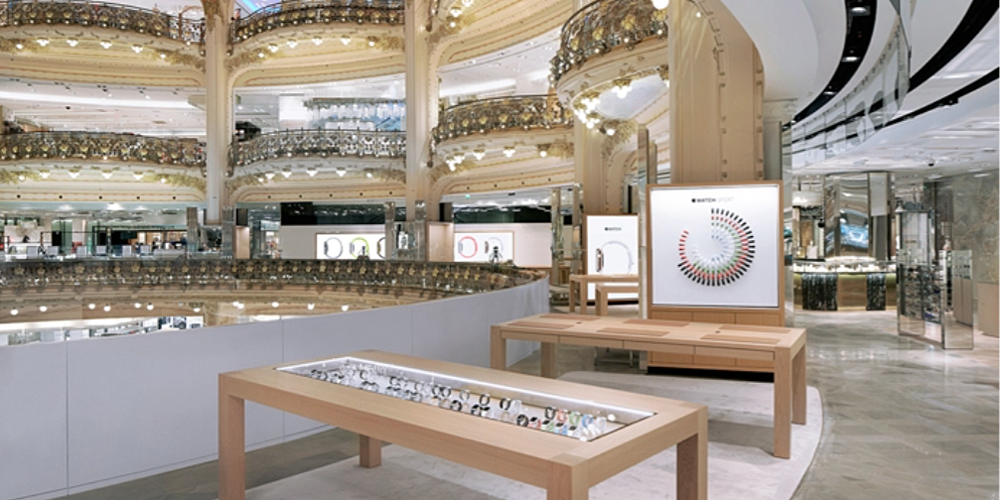 A report from French site Mac4Ever claims that Apple is planning to close a high-profile Apple Watch store-within-a-store in the famous Galeries Lafayette department store in Paris. This is one of three department store initiatives Apple opened for the launch of the Watch back in 2015.

The Apple Watch area in the store is a large one, spanning the width of four full balconies in the upmarket store, sitting alongside fashion brands Chanel and Hermes …

The site says that it is ‘99% certain’ that the department will close in January. It reports that the decision has been prompted by poor sales, Apple having previously reduced the number of staff working there. Remaining staff will reportedly be redeployed to Apple Stores at St Germain and elsewhere in the city.

With the quiet discontinuation of the solid gold Apple Watch Edition, and replacement with a more restrained ceramic model, Apple seems to be somewhat moving away from its more upscale jewellery ambitions for the Watch, positioning it less as a fashion accessory and more as a health and fitness device. It may simply be that Apple no longer considers fashion-focused department stores to be the most appropriate outlets.

There is no word as yet on the fate of the similar department store units in London and Tokyo. We’ve reached out to Apple and will update with any response.