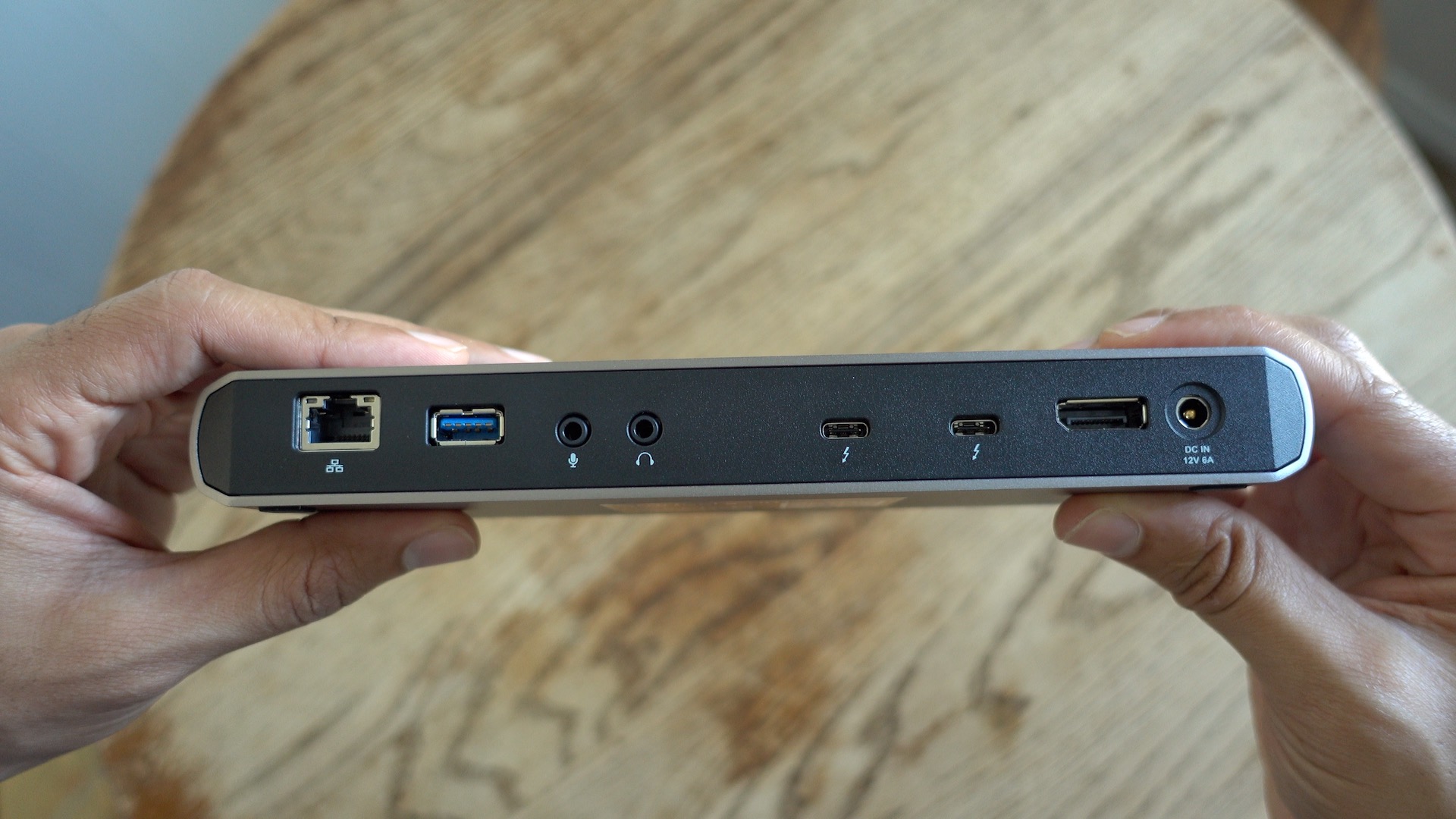 TB3 enabler is a brand new hack from Khaos Tian that enables unsupported Thunderbolt 3 devices on the latest MacBook Pro.

It just so happens that I have an “unsupported” Thunderbolt 3 dock in my possession — StarTech’s Thunderbolt 3 Dual-4K Docking Station. I was really disappointed when I found out that this dock would only support Windows, but after using the TB3 enabler hack, I’m able to use the dock on macOS 10.12.1.

But before you get too excited, know that there are some downsides to using this method, and remember that this Dock doesn’t feature official macOS support and therefore has limitations.

It’s still not totally clear as to why Apple chose to implement a software block for certain Thunderbolt 3 devices, but according to an email reply from Apple, it appears to be more of a business decision surrounding certification than an outright technical decision.

Oh perfect. So in addition to USB-C and TB3 compatibility issue, there is the Normal TB3 and macOS-Certified TB3 accessories 🙃 #ThisIsFine pic.twitter.com/vLKqw43rRs

At any rate, your mileage may vary, and by using this hack, you take full risk and responsibility for running the script that enables unsupported Thunderbolt 3 hardware on macOS.

How to enable unsupported Thunderbolt 3 devices on the MacBook Pro

Step 1: Verify that your Thunderbolt 3 device is unsupported by macOS.

Click Apple () in the menu bar, hold the Option (⌥) key, and click System Information. Click Thunderbolt under the Hardware section, and ensure that your connected Thunderbolt 3 device is being recognized as an unsupported device. 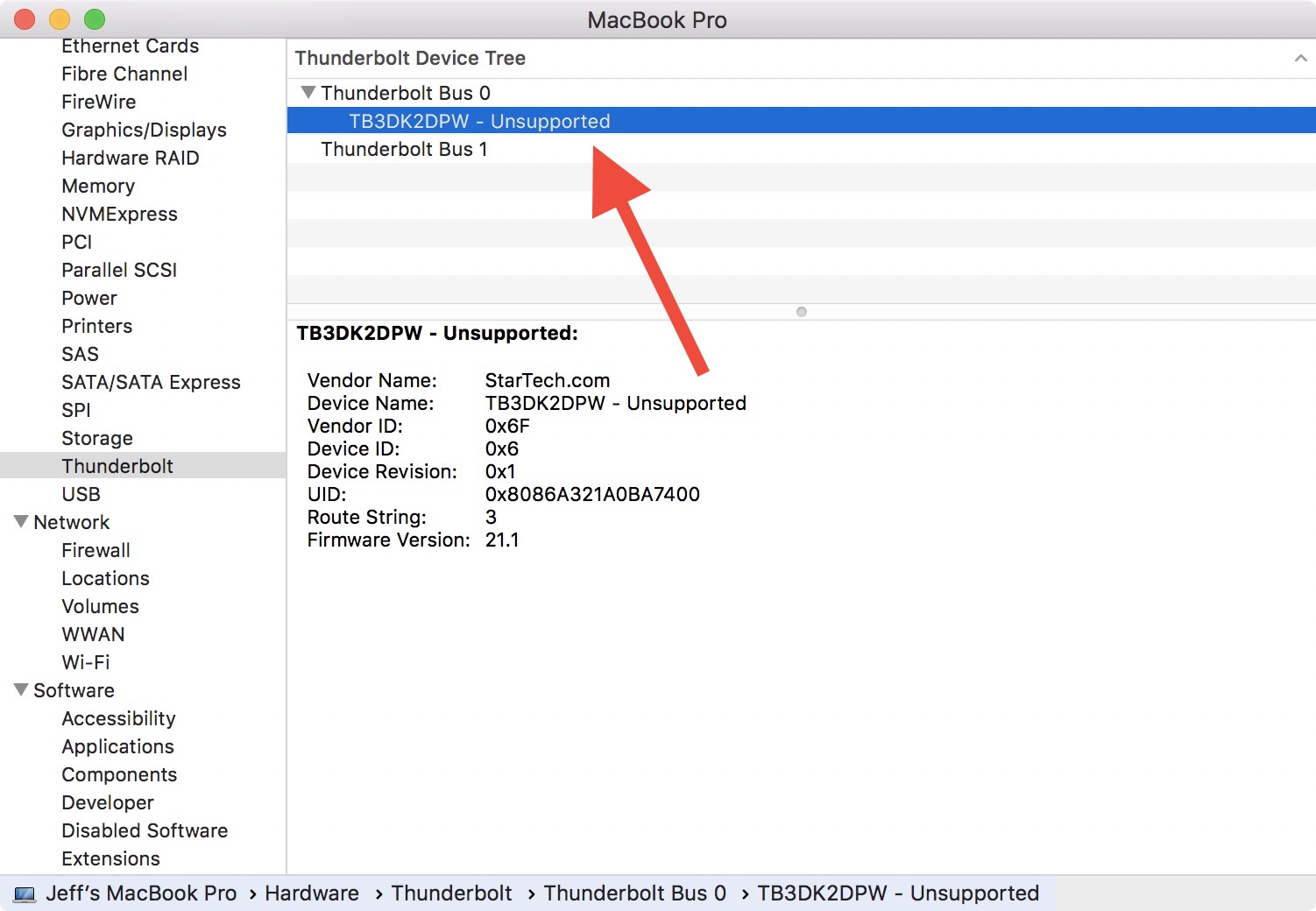 To run this script successfully, you’ll need to disable SIP. To do so, reboot your Mac, and as its booting back up, hold Command (⌘) + R. Once you arrive at the Recovery menu, click Utilities in the menu bar, and select Terminal.

In the Terminal window, type the following and press the Return key on your keyboard:

If successful, restart your Mac normally.

You can find TB3 enabler on KhaosT’s GitHub page. Click the link for tb3-enabler.py and right-click on the Raw button and select Download Linked File. The script file should be saved to your Downloads folder if using default Safari settings.

Step 4: Give the script execute permissions.

Open a Terminal window and type the following:

Place a space after the x, and drag the tb3-enabler.py file from your Downloads folder on to the Terminal window to copy the path to the file. Press the Return key on your keyboard to give the script execute permissions.

In the same Terminal window, type the following:

Once the script is finished running, restart your Mac. 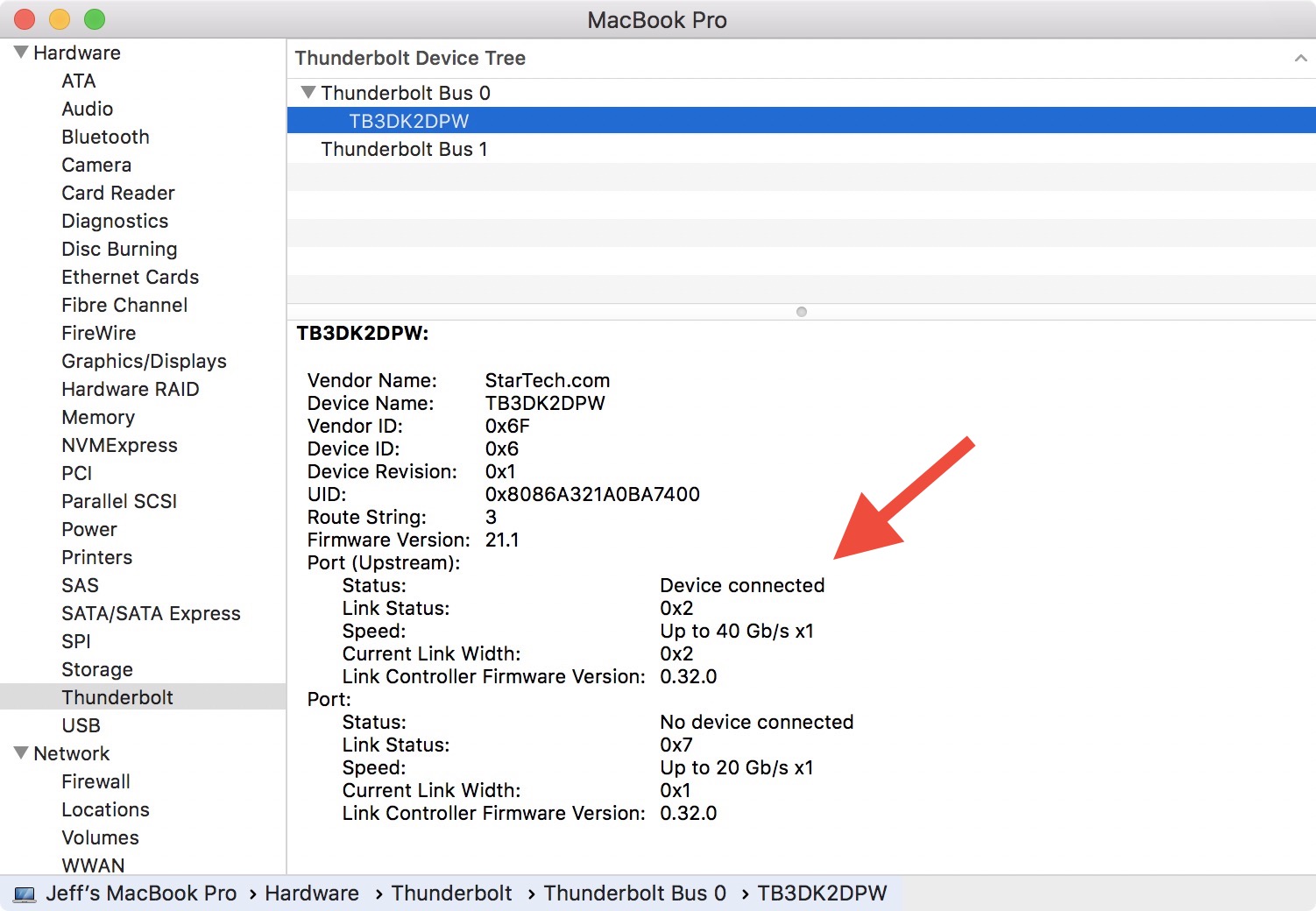 After your reboot, click Apple () in the menu bar, hold the Option (⌥) key, and click System Information. Click Thunderbolt under the Hardware section, and ensure that your connected Thunderbolt 3 device is being recognized as a supported device instead of an unsupported device.

How to remove the TB3 Enabler hack

If you wish to remove the patch, simply repeat step 4, but replace apply with restore. After that, repeat step 1 and replace disable with enable.

The main downside that I’ve encountered with this method for enabling unsupported Thunderbolt 3 devices is that you have to keep System Integrity Protection disabled, and it only (as of this post) works on the latest publicly available version of macOS. I had to restore my macOS installation from the 12.10.2 beta back to 12.10.1 in order to test this out.

The folks at StarTech sent me this dock well over a month ago in anticipation for the MacBook Pro’s adoption of Thunderbolt 3. Unfortunately, this dock is labeled as being for Windows-only, and showed up as unsupported when connecting it to my Mac.

I actually was in the process of shipping the dock back to StarTech when I got wind of this hack, so I’m glad I didn’t return it yet, as it allowed me to verify that it works.

The main thing I like about this dock is that it’s a true Thunderbolt 3 dock, meaning it supports full Thunderbolt 3 bandwidth. I was able to connect to my 4K display via the DisplayPort connection on the dock, and get full 4K support at 60Hz.

If you have displays with Thunderbolt 3 ports, StarTech says that you’ll be able to connect to multiple 4K displays using this dock, though I’ve yet to test that functionality.

Along with the display output ability, the dock features a couple of USB-A ports, an extra 5Gbps USB-C port for connecting USB-C devices, Gigabit ethernet and a pair of 3.5mm ports for headphones and a microphone. 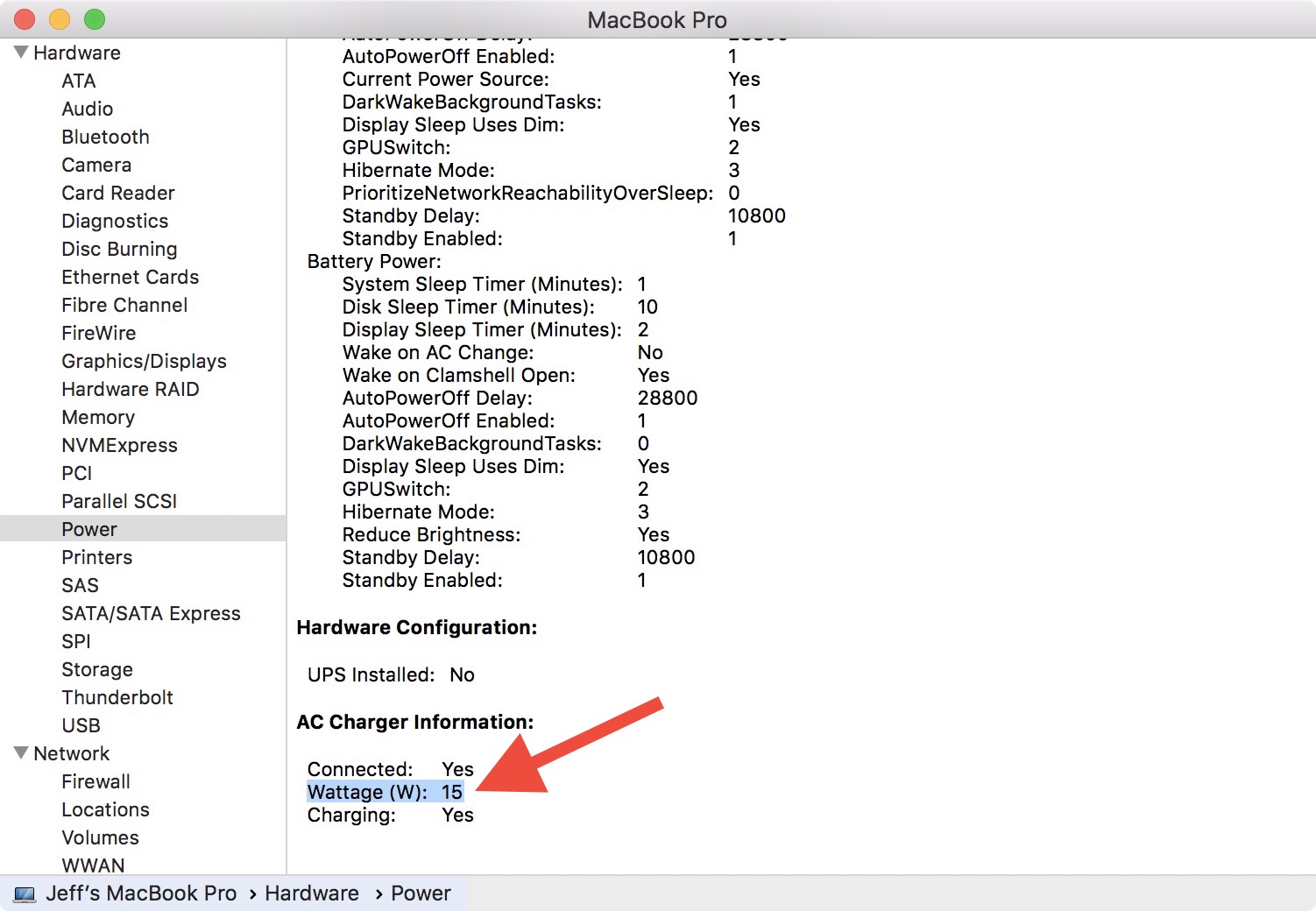 The biggest downside that I encountered while using this dock is that it only provides 15W of power to my MacBook Pro when connected via Thunderbolt 3. StarTech’s documentation says that the dock is fully capable of  supporting USB Power Deliver 2.0, which provides up to 100W of power, but apparently it’s seeing the MacBook Pro as a USB accessory, not a computer. This is probably something that StarTech could fix via a firmware update, but who’s to say if that will ever happen considering the device isn’t supported on Macs without taking advantage of a hack? 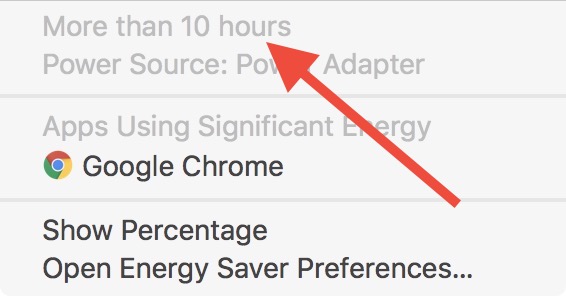 Needless to say, the lack of adequate charging power is a major downside to using this dock, assuming StarTech won’t be in a hurry to address it. Of course, you could opt to connect your MacBook Pro’s charger, but that kind of defeats the purpose of a one-cable-solution dock.

Despite these warnings, I know that some of you will want to use this dock for its ability to connect to 4K (and 5K) displays at 60 Hz. I definitely can’t outright recommend it due to its limitations and the hoops that you have to jump through, but it’s pretty awesome to be able to turn what was essentially a paperweight (for Mac users, it works great on Windows machines and even in bootcamp) into something useful. In fact, despite its lack of proper charging ability at the time, I think I’ll use this dock, instead of the CalDigit USB-C dock we recently covered, due to its added bandwidth and display output abilities.

You can find the StarTech Thunderbolt 3 Dual-4K Docking Station on Amazon for a little over $200. It comes with a power adapter and a 0.5 meter Thunderbolt 3 cable.

I’ve reached out to StarTech about this hack, and will be reporting back with any official updates about future support or firmware upgrades. I know that the company is also in the process of producing additional Thunderbolt 3 accessories for Mac as well.

I’m happy to get the dock working to a certain extent, but I’m even more excited about the potential prospects of using eGPUs on the MacBook Pro. I’ve seen reports of people having success using Razer Cores and other Thunderbolt 3 enclosures by means of this hack, which is definitely good news for anyone interested in beefing up the performance of the MacBook Pro while on the desktop.