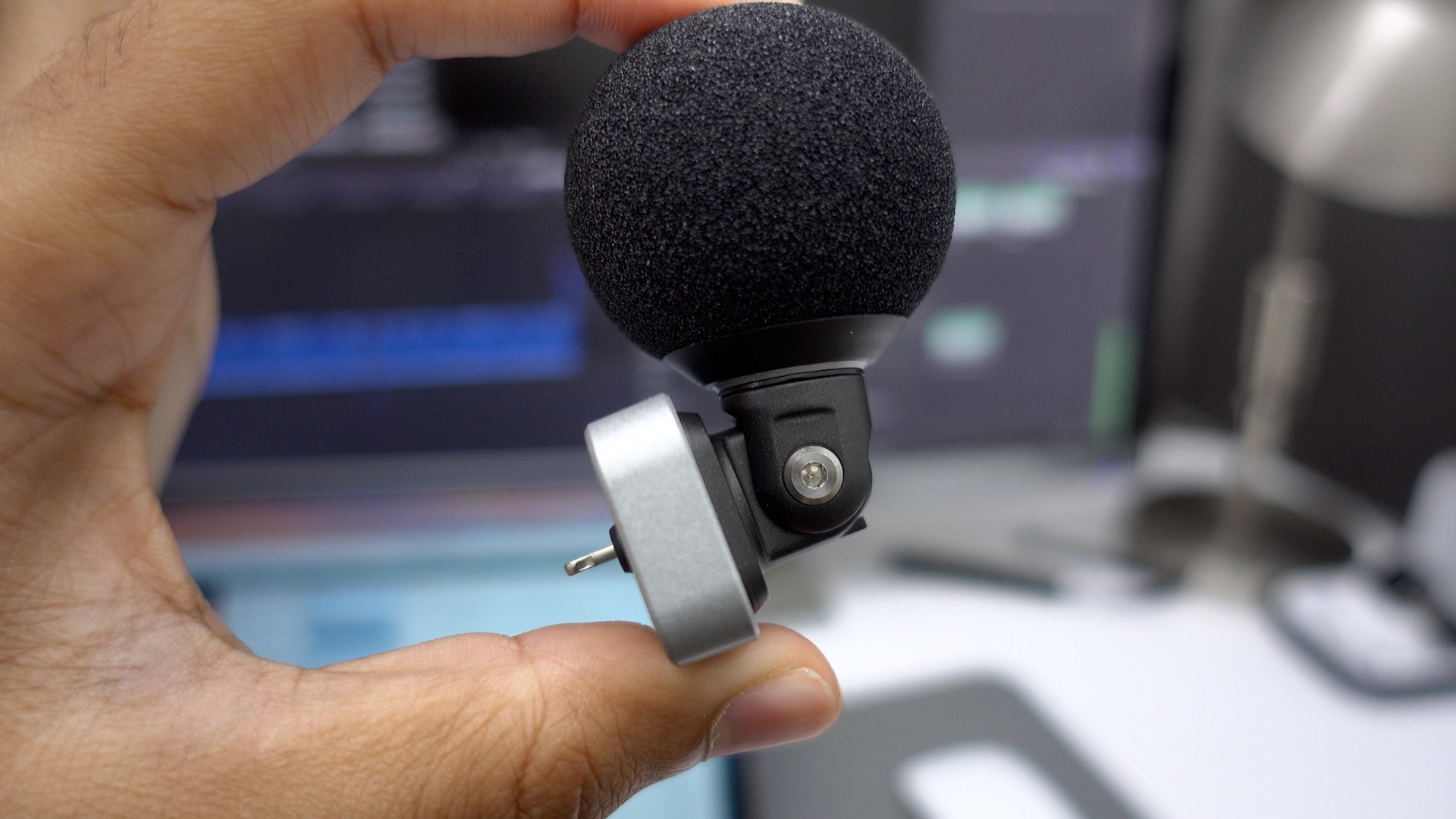 If you want to record audio via your iPhone while on the go, you basically have two choices: you can use your iPhone’s on-board microphone, or you can use an external microphone. For anyone who’s compared the difference in sound quality, the decision is a no brainer. You’ll get significantly better sound quality by opting for an external microphone like the Shure MV88 ($150 on Amazon). Check out our video walkthrough for a brief look at some of the details.

The Shure MV88 is a small, compact external microphone solution for iOS device owners with Lightning ports. Its simple no-nonsense design allows it to connect directly to your iPhone’s Lightning port in order to start recording in seconds.

Shure’s microphone comes with its free Motiv app, which allows you to tap into some of the unit’s advanced features. The app isn’t perfect, but it does a fairly decent job of allowing you to change both basic and advanced microphone settings.

If you just want to hear the difference between the Shure MV88 and the iPhone 7’s internal microphone, then watch the video below, as I get right into it without a lot of unnecessary fluff.

This isn’t the first Shure microphone that we’ve reviewed on 9to5Mac, but it’s by far the smallest. The MV88 ships with a petite travel case that clues you in as to how tiny the actual microphone must be. After unzipping the travel case, you’ll find the microphone, adorned with windscreen, resting within the confines of the case. 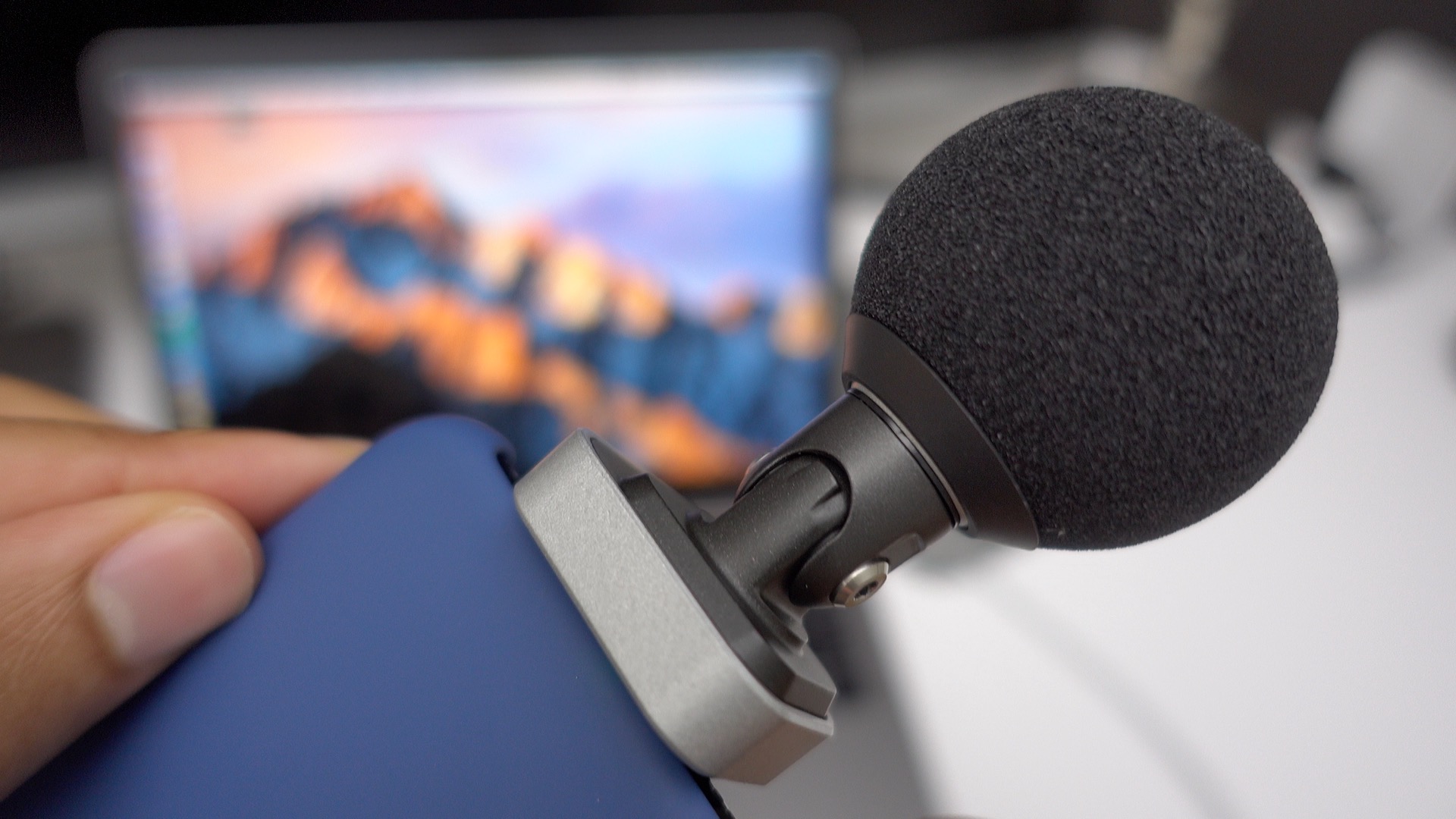 The MV88 takes on a very simple design. In fact, there are no buttons or switches to be found on the unit at all. What you will find is a pivoting head, removable windscreen, Lightning connector, and status indicator. There is no 3.5mm input for headphone monitoring, which turns out to be a bit of an issue for those of you using this microphone with an iPhone 7. 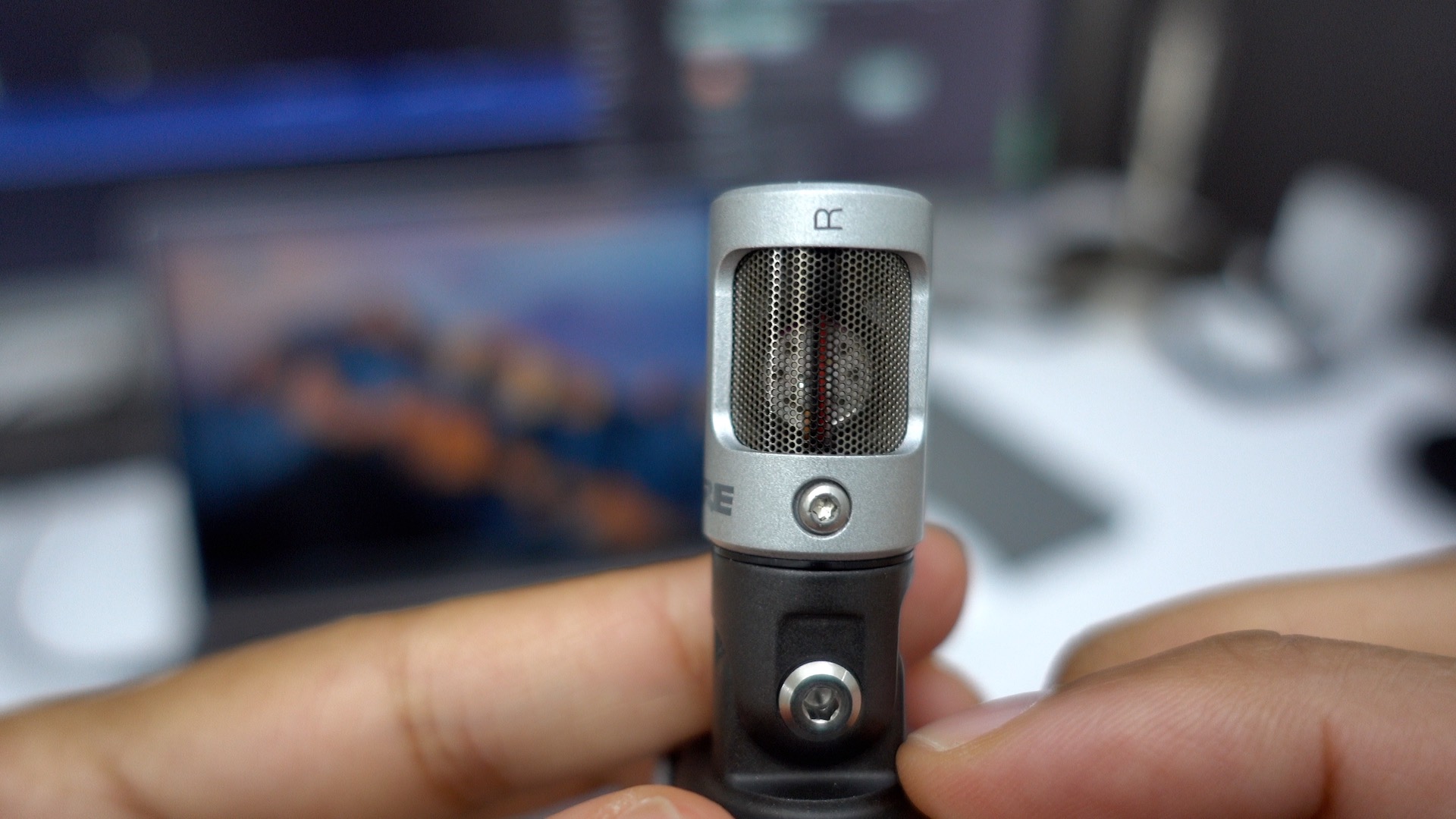 Removing the windscreen, which easily slides off, reveals the stereo microphone diaphragm. The microphone head and base are constructed out of metal, while the pivoting portion is comprised of high-quality black plastic. For the most part, I think this microphone could withstand some moderate abuse and keep on ticking, and the connection between the iPhone and the MV88 instills confidence that it won’t inadvertently disconnect while recording. 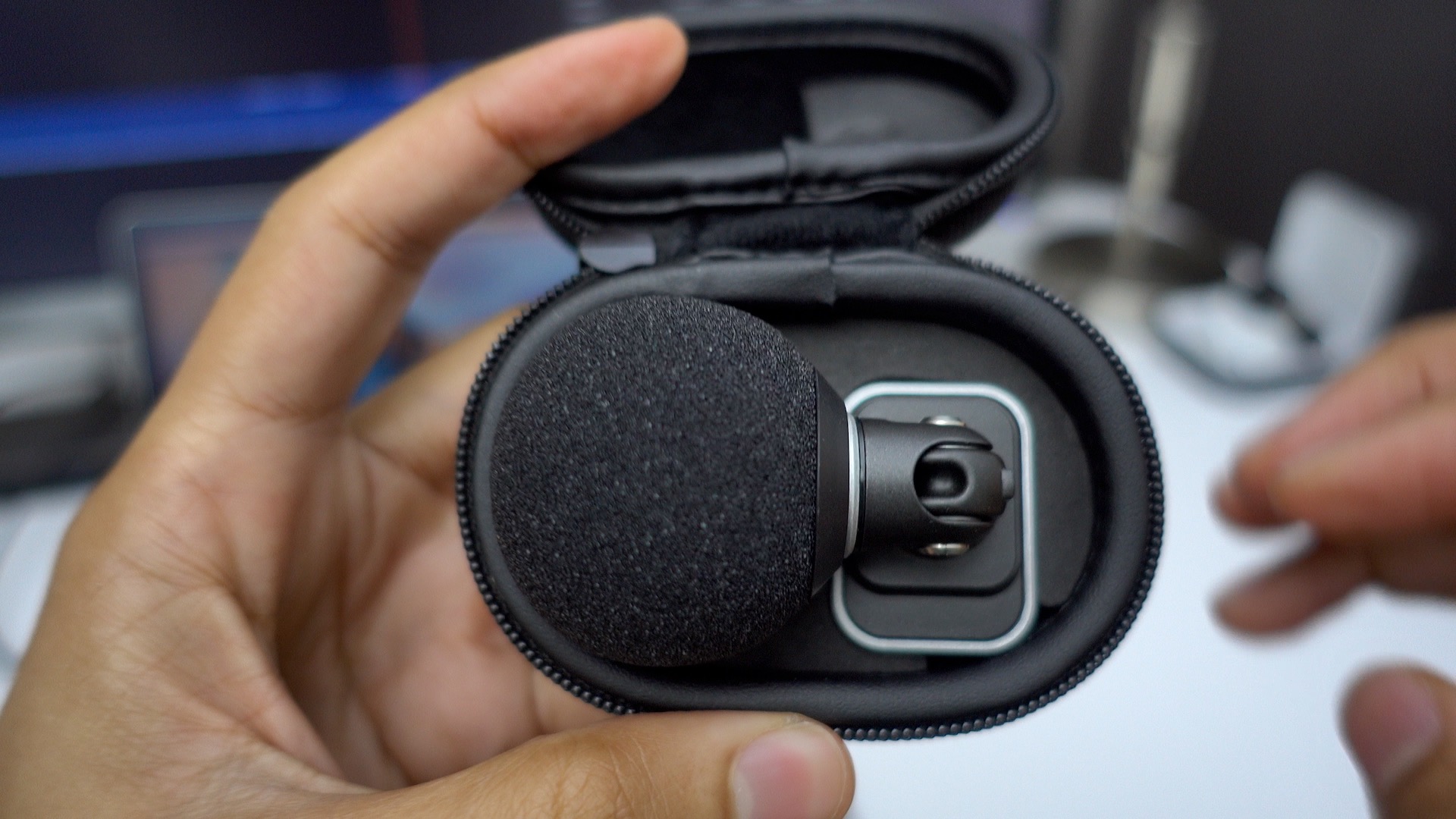 The MV88, via software, can function with stereo width, mono cardioid, mono bidirectional, or raw mid-side polar patterns. These and other settings can be changed on the fly within the Motiv app.

Users can select the type of audio they are recording, and the app will try to adjust its settings to meet the general needs of each audio type. Of course, users who wish to exert more fine-grained control over recordings can select an audio type, and then adjust settings like mic gain, compression, wind reduction, and EQ, after the fact.

The Motiv app does feature a button that allows users to monitor audio, but for iPhone users lacking a headphone jack, that proves to be an issue. Monitoring over Bluetooth didn’t work for me at all when I tried to use my Beats Solo3 Wireless Headphones, and even if it did work, the latency would probably be too distracting. Of course, this isn’t necessarily Shure’s fault, but it could have provided a built in 3.5mm connection for monitoring on the MV88 itself. 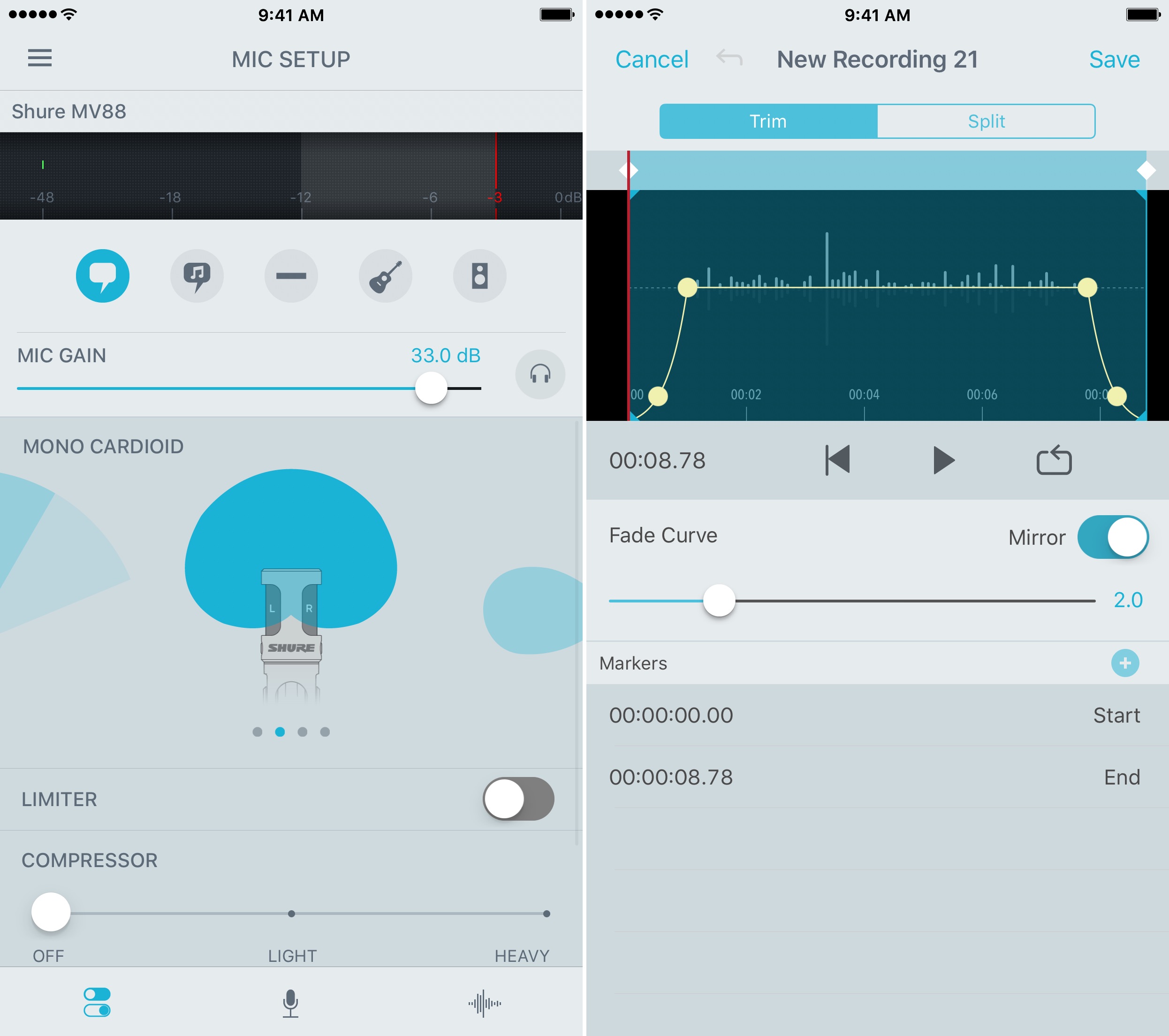 To get the most out of this microphone, you’ll need to use the Motiv app. The app is serviceable, but it doesn’t have a very intuitive interface, and it crashed a time or two while I was using it.  The good news is that you can use the microphone in any other recording app like GarageBand or Ferrite, but you won’t have access to some of the advanced settings provided by the Motiv app.

After each session recorded within the app, you’ll be prompted to provide a name for the recording. From there, all recordings can be accessed by tapping the waveform button in the bottom right-hand corner of the app’s interface. After selecting a recording, users can rename, share, or perform basic edits on the audio. Editing consists of trims, splits, and fade curves, which provide enough basic utility for run and gun scenarios, but you’ll want to use more advanced audio editing apps for in-depth edits and sequencing.

Getting audio out of the Motiv app is easy to do via its built-in sharing options. Shure provides direct sharing access to Messages, Mail, the Camera Roll, and Dropbox, but is also kind enough to provide users with the standard iOS sharing panel as well.

Once you get used to the Mv88, you can produce some fine-sounding recordings with this microphone. It’s certainly worlds better than the iPhone’s built-in mic, so if you’re looking to use your iPhone for recording while on the go, the Mv88 lends a definite advantage. 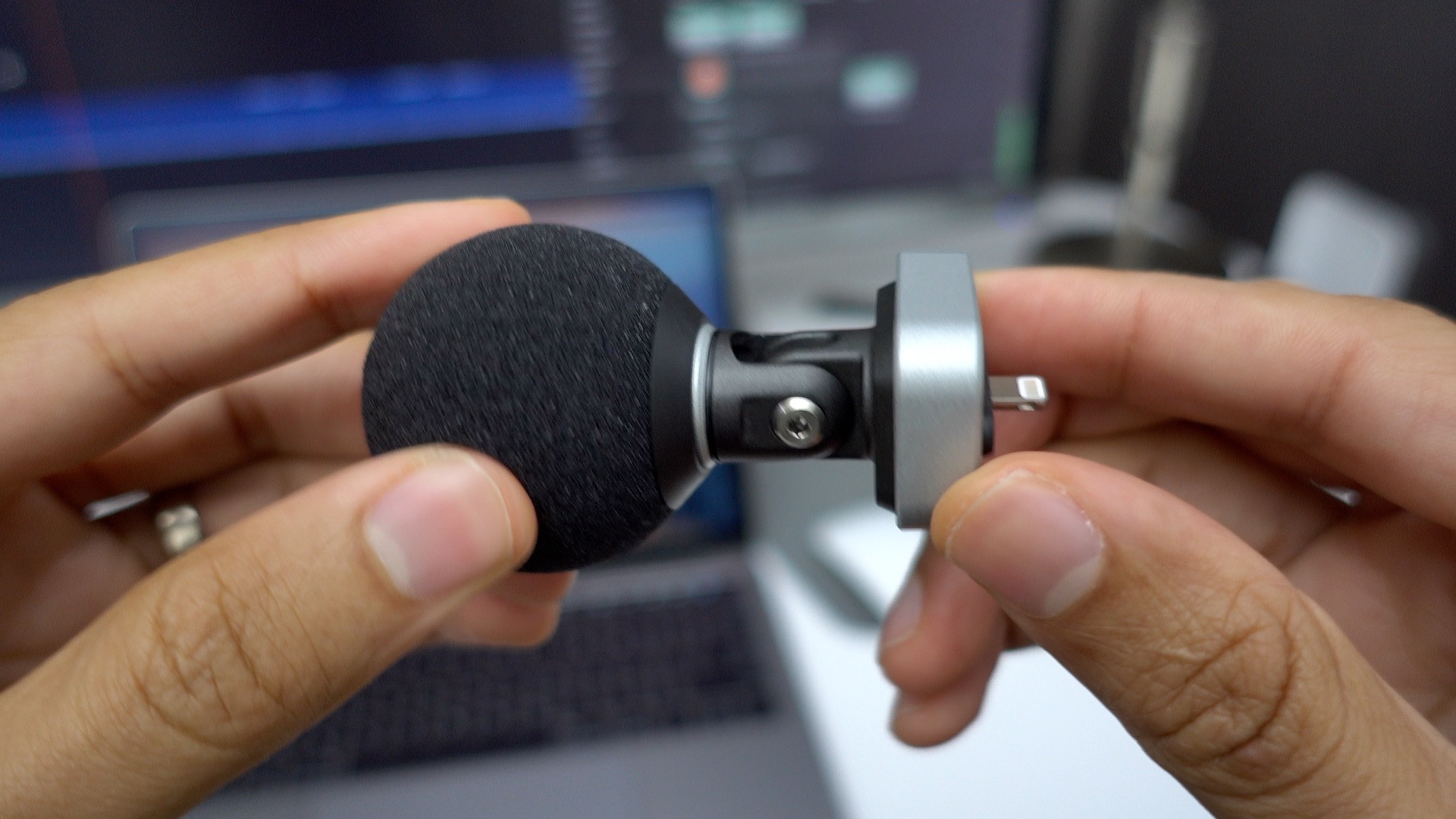 There are some negatives with the Shure MV88. Most noticeably, the Motive app is a little clunky and difficult to use, and there’s no way to monitor sound when paired with an iPhone 7. But if you’re looking for a compact way to gain significantly superior audio quality from your iPhone, then the MV88 is a solid choice that won’t break the bank at only $150. If you’re looking for a microphone that you can sit on your desktop, then you may want to check out the aforementioned Shure MV5.

Would you consider using an external microphone to record audio with your iPhone? Share your reasoning down below in the comments.