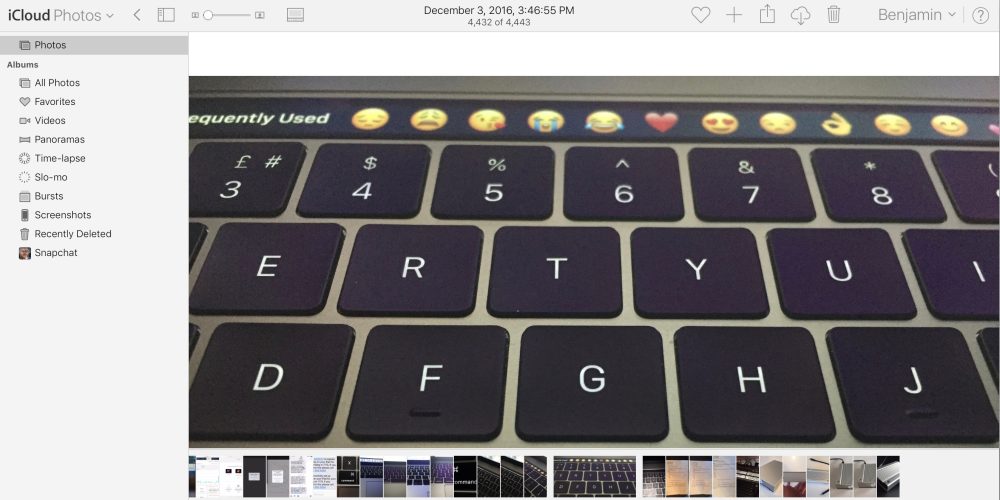 Apple is readying some upgrades to its iCloud Photos web app found on iCloud.com, first noted by MacMagazine. The Photos web app allows users to access their iCloud Photo Library through a web browser, across Mac and Windows computers.

However, it is somewhat rudimentary in its current state … but the beta.icloud.com site now includes a redesigned Photos app featuring a sidebar and thumbnail scrubber like what already exist in the native Photos app for Mac. Apple tests new features on beta.icloud.com before rolling them out to everyone, so the new features should be available for everyone soon.

The new Photos app seen on the iCloud.com beta site adds a new toolbar at the top of the screen with upload and download buttons, flanked by a vertical sidebar listing the different albums available in the users’ library. The sidebar can be toggled visible or hidden with a button in the top-left corner.

When viewing a particular photo, the Photos web app can now display a horizontal scrubber of images taken before and after the presented image. This is another interface element ported from the Mac app to the website.

Apple occasionally rolls out changes like this to the iCloud.com web app suite with little fanfare. They don’t necessarily deserver it either — it’s not a revolutionary improvement — but the changes provide an iterative enhancement for people that use the iCloud.com offering. It is nice that these web apps have not simply been forgotten and abandoned, though.

Despite these improvements, the Photos web experience lags behind the native Photos apps for iOS and Mac in many ways. It lacks more sophisticated iOS 10 features like Memories, Faces, and automatic scene/object recognition.