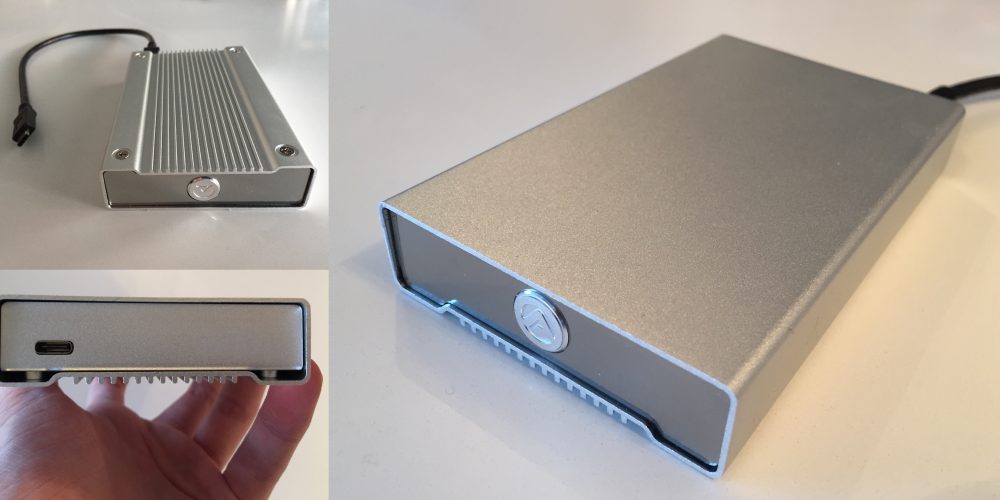 Update: The Neutrino U3.1 USB-C SSD enclosure is back in stock. Buy it now for $49.99, perfect for the new MacBook Pro.

The USB-C ports on the new MacBook Pro has been the subject of much controversy. In this review, it’s time to look at some of the capabilities the port provides. The $49.99 Akitio Neutrino U3.1 is one such product. The Neutrino is an inexpensive external SSD enclosure that works with USB-C; it draws power and provides data bandwidth up to 10 Gbps.

This means it can add fast external storage to the new MacBook Pro with the convenience of a single cable, all enclosed into a small, light, chassis that can be carried around in a bag. Keep reading for my hands-on with the Neutrino U3.1 … is this the best external hard drive for Mac?

The 2016 MacBook Pros set a new benchmark for SSD performance with the internal solid state storage more than twice as fast as the previous generation. As advancements in CPU speed stall, the storage performance is much of the reason why modern MacBooks feel as zippy.

This kind of speed is hard to give up; connecting a spinning disk HDD drive to the laptop feels frustratingly old-fashioned and slow. This is where an SSD enclosure like the Akitio comes into play.

The Neutrino U3.1 is a compact aluminium housing for a 2.5 inch drive bay. It’s very portable and barely noticeable in a laptop bag: small, light, and durable. The unit has an understated design with a large heatsink to provide passive cooling. It ships without an internal disk: this means you can choose how much capacity you want … and upgrade it later.

The Neutrino accepts almost any 2.5 inch SSD, supporting drives up to SATA-III 6Gbps. With the (bundled) USB-C cable, connecting the device to a MacBook Pro is plug-and-play. The port backs a USB 3.1 Gen 2 interface which means its 10 Gbps bandwidth saturates the SATA-III bandwidth and allows the fitted drives to read and write at full speed. Conveniently, the device takes advantage of USB-C capability to draw both power and data, so you need just one cable to add fast expandable storage to the laptop.

As its sold as a standalone enclosure, using the product necessitates a purchase of an SSD drive itself (unless you have one spare ready to use). On top of the $50 for the enclosure, expect to spend about $200 for a 500 GB SSD that runs at the full SATA III speed. Solid state prices are falling all the time, so you can buy a smaller capacity drive today and upgrade the disk in the Neutrino in a couple of years when 2 TB SSDs (currently around $800) are more affordable.

I tested the Neutrino with a $120 256 GB drive, effectively doubling the storage capacity of my new base model 15-inch MacBook Pro with Touch Bar. This will suffice for the time being — even as a 1:1 backup clone of the internal SSD — until I can afford to buy a bigger capacity.

Setting up the enclosure is a straightforward affair in theory; fit the drive in the slot then plug the caddy into the Mac using the USB-C cable. This process is somewhat fiddly as there are a lot of screws to undo and replace. The outer metal frame falls away after the removal of four screws, one in each corner, which then reveals the drive bay itself. 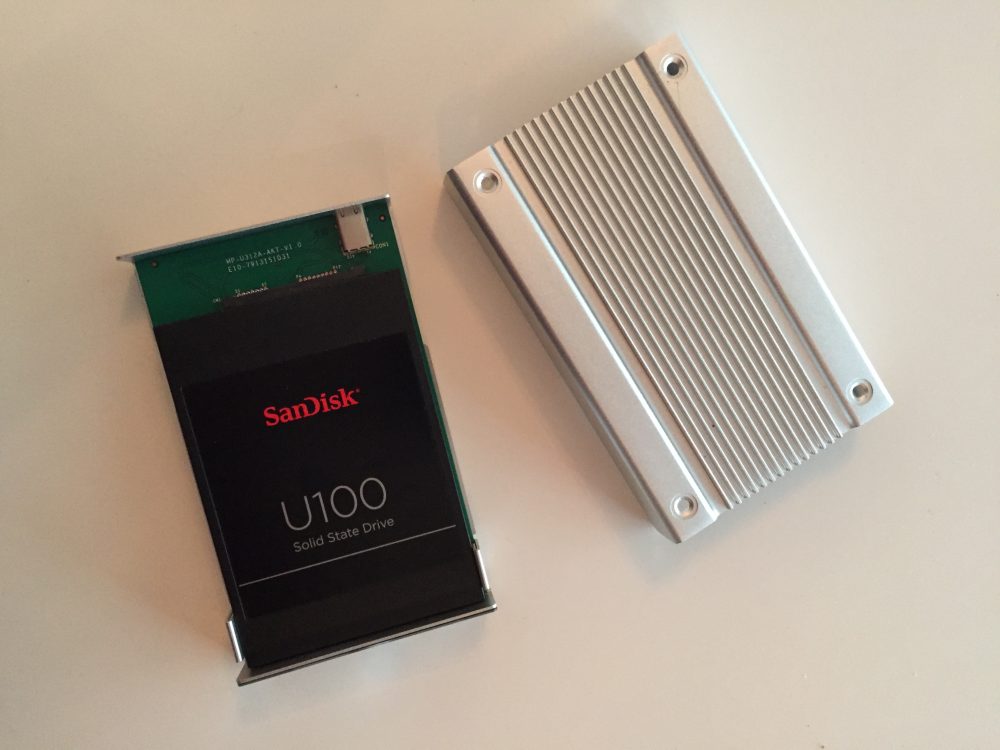 Accessing the bay is like seeing the guts; the pretty aluminium wrapper is peeled away to reveal a dirty green array of pins and circuitry. The SSD has to be placed into the logic board and then held in position with six more screws. This is then slotted back into the cover plate — affixing the four screws once again. It’s not hard to do, it’s just time consuming. The product is not designed to have its drive swapped out frequently: this is a product where you would be expected to keep the same underlying SSD for months at a time, maybe upgrading it once a year at the most.

After all of that, you are back to looking at a small aluminium brick with a USB-C port. Using the drive now is as simple as plugging the USB-C cable into the cable and the other end into the MacBook. That’s it; the drive sips power from the laptop battery or from the power adaptor directly if the computer is charging.

Then, it can be treated like any other hard drive. You can reformat it, move files from and to, use it as Time Machine storage, whatever. Just like a USB key, you have to unmount it from Finder when you are done to ensure file integrity. The difference between this and a thumb drive of course is capacity and speed. So, what kinds of performance can you expect from the Neutrino? As mentioned above, the Thunderbolt USB-C interface it uses is rated for 10 Gbps which is more than enough to saturate the SATA-III 6Gbps bandwidth. This means you should get almost the maximum speed possible from any SATA-III drive. I tested the real-world read and write performance using the Blackmagic Disk Speed Test utility.

Indeed, I saw read speeds at about 500 megabytes per second, with write speeds varying between 340 to 400 megabytes per second. This is not as fast as the internal SSD (which Apple boasts is 100% faster than the 2015 MacBook Pro) but it is more than sufficient for most tasks, whether that’s making backups, cloning drives or managing media.

What’s kind-of-crazy is that the performance from the Neutrino external storage is on par with the 2012 MacBook Pro’s internal SSD, which was my workhorse machine for four years right up until I replaced it with the 2016 model.

I also verified the speed with Finder based file operations, rather than synthetic benchmarks. I copied a 15 gigabyte music library, made up of over 6,000 individual items, in less than 50 seconds. A single 15 GB file was even faster, under 30 seconds. I also cloned my entire 256 GB disk in fifteen minutes, which should be fast enough for most people. The caddy was quiet and did not get warm throughout the entire process. 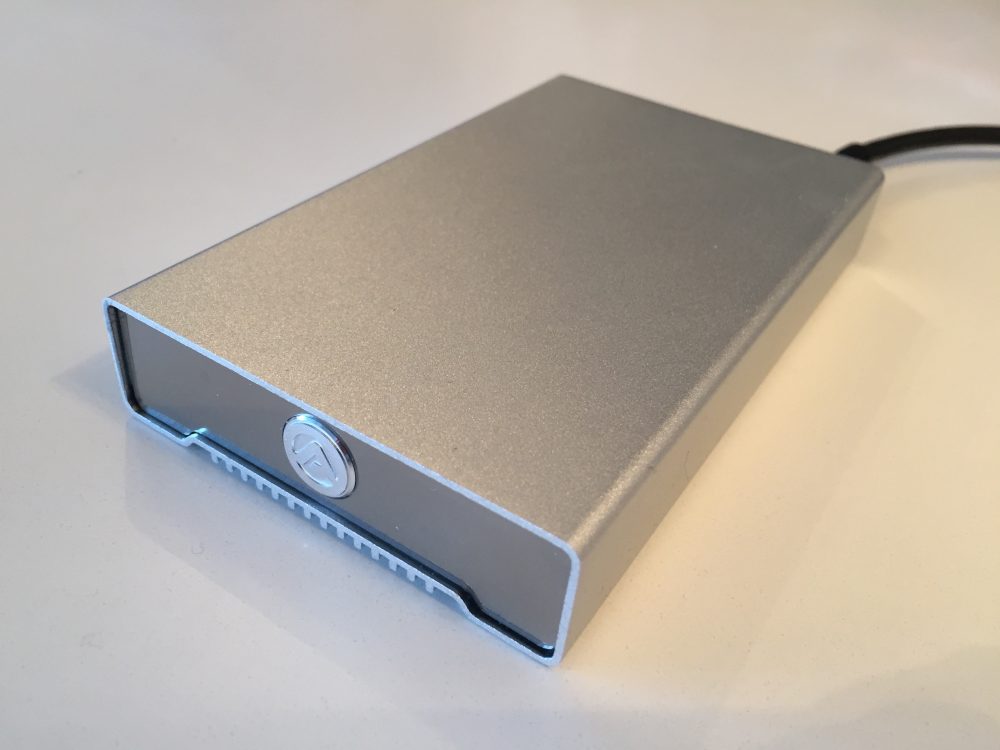 Although much of the appeal with this enclosure is its native USB 3.1 connectivity and speed, it will also work with older hardware that does not have the latest ports. With a different cable attached, the drive will interoperate with USB 3.0 and USB 2.0 devices.

I think this product is great for what it is; a no-frills SATA-III SSD caddy that runs over USB-C. You can buy the Akitio Neutrino U3.1 for around $50. As a hard drive caddy for the most popular external SSDs available, it’s hard to fault it. It does one thing in an enclosure barely larger than the SSD itself: it’s perfect to throw in a bag and carry around with you. Find out more information about the Neutrino on the Akitio website.

My hesitation would be whether a dedicated external hard-drive is the best way to exploit the Thunderbolt 3 USB-C ports in the new Mac laptops which can max out at 40 Gbps. It almost feels like a waste using up one port just for external storage. It may be worth waiting for a combo-hub Thunderbolt 3 device that combines external storage with display output ports, more USB expansion and such. However, that type of product doesn’t really exist today and, if it did, it would be significantly more expensive than $50.