Today at CES 2017, Kanex announced its new GoPlay Series of portable wireless game controllers for iOS and tvOS. The first release in the series, the GoPlay SideKick, is a pocket-sized wireless gaming controller that works with the iPhone, iPad, and Apple TV.

The GoPlay SideKick is MFi-certified, and hence will work with most of the games available on the App Store with built-in support for MFi controllers. The SideKick features a 20-hour rechargeable battery and features Bluetooth 4.0 for connectivity to your iOS or tvOS-powered devices.

One of the more unique characteristics of the GoPlay SideKick is its portable size. In fact, it’s small enough that Kanex is including a clamshell case to protect the controller.

But the case has a special function, in that it features a notch that allows you to use it as a stand for your iPhone or iPad. Kanex says that this allows for a console-like experience while gaming on the go. 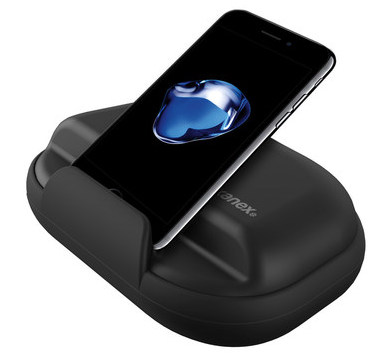 Kanex has slated the GoPlay Sidekick for a February 2017 release, with other models in the series to come afterward. The controller is launching with an MSRP of $59.95.

We look forward to going hands-on with the controller once it’s available. It reminds me of the Steel Series Stratus, which Jordan reviewed back when it launched for $99, but the Kanex controller comes in at much more palatable introductory price point.

Steel Series launched their Stratus back when MFi controllers were a new thing, but as you can see, there are now lots of MFi controllers to choose from on Amazon at reasonable prices. One of my favorites is Gamevice’s offering, which, as our own Benjamin Mayo noted, can basically turn your iOS device into a handheld gaming console.